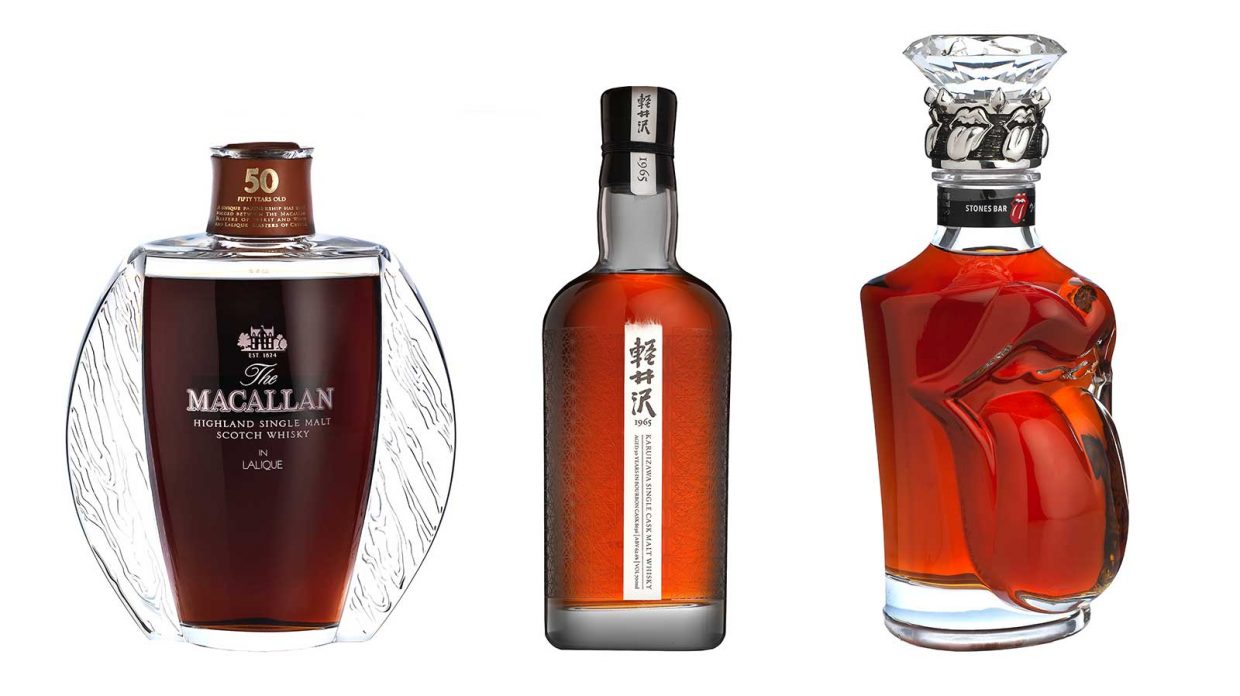 Rare Macallan, Karuizawa, and the Rolling Stones 50th Anniversary Suntory Japanese whisky are all up on the block at Bonhams, Edinburgh this October.

After last June’s lukewarm auction, Bonhams is aiming to win back whisky collectors to Edinburgh with an impressive line-up of Karuizawa and a couple of bottles of top-notch Macallan. Yet at the same time, the auction house is applying a discount strategy on bottles that have previously failed to sell. The catalogue for the Oct. 9 sale lists 376 lots, including 140 previously unsold lots. On the second time around, Bonhams has cut estimates for these whiskies—which include many bottles of Glenfarclas, Springbank, and Bruichladdich—reducing their combined value by over $60,000.

Japanese whisky is well represented with 25 full-size bottles of Karuizawa, the most valuable being a 1965 Karuizawa 50 year old (Lot 251, est. $28,000–$31,000). If you want to spend the night together with a bottle of The Rolling Stones Suntory 50th Anniversary (Lot 257, est. $31,000–$43,000), then bear in mind that Bonhams, Edinburgh sold one in June that only achieved a hammer price of $28,000. The original 1964 Black Bowmore bottlings released in the 1990s are going under the hammer individually (Lot 336 onwards, est. $22,000–$25,000 each). Be sure to ask for a condition report before bidding; the fill levels have dropped to mid-shoulder toward the end of the series, although bottles with much lower fills have still sold successfully elsewhere.

My picks for the savvy collector are the two bottles of Redbreast Dream Cask 32 year old (Lot 308, est. $1,000–$1,200), which received 91 points in the Whisky Advocate Buying Guide and appear to be priced well below auction values elsewhere. Or pick up something from the nice little run of collectible Lagavulin whiskies, including Fèis Ìle, Jazz Festival, and Distillery Only bottlings (Lot 185 onwards). You could also take a shot at the 1964 Lochside 46 year old single blend (Lot 303, est. $250–$370). This tasty oddity contains single malt and single grain whisky produced at the now-demolished Lochside Distillery in Montrose.

The large number of unsold whiskies could become a millstone around Bonhams’ neck—but the discounting might attract bargain hunters. On the other hand, the move could backfire by signaling that customers paid over the odds in June. Bonhams has plenty of quality whiskies on offer in October, but it remains to be seen if its price-cutting strategy for unsold stock will pay off.