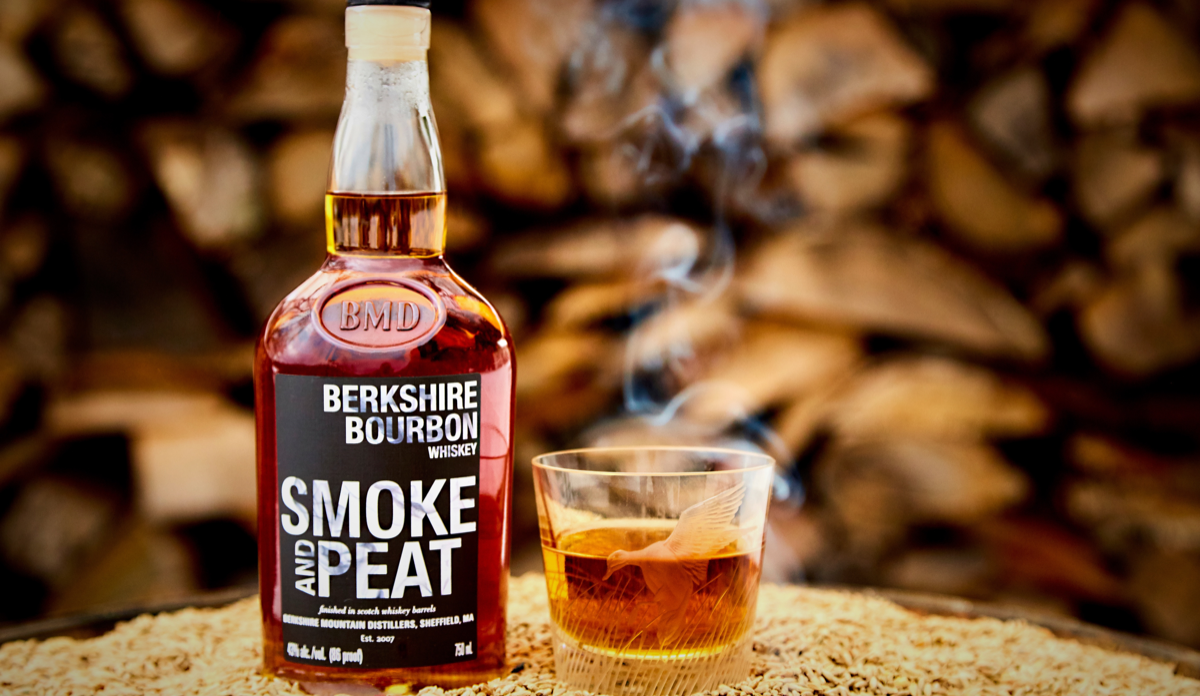 Located in the woods of Western Massachusetts, Berkshire Mountain Distillers first made a name for itself with its acclaimed Greylock gin. But in the last few years, the company has begun to experiment with unique and innovative whiskey releases. The latest, Berkshire Bourbon Smoke and Peat, is a new twist on a barrel-finished bourbon. Smoke and Peat is made by finishing fully mature 4 year old Berkshire Bourbon (72% corn, 18% rye, 10% barley) in Islay single malt casks for 3 to 8 months. The whisky is an unusual crossover, a fusion of sweet, spicy bourbon and the flavors of smoky, peaty scotch.

“I’d been looking for Islay casks for nine years and hadn’t found them,” says Chris Weld, founder, owner and distiller at Berkshire. “It’s the first time in ten years that these casks became available. All the rest went to breweries, and as far as I know we’re the only distillery to get them.” Weld wanted to experiment with creating a whiskey that blended elements of both bourbon and scotch, and he hopes Smoke and Peat proves interesting to fans of both spirits.

“Finding such good quality barrels was a windfall,” says Weld, who can’t disclose the source of the casks. “It really was just a wonderful collaboration of two worlds in how it came together. The thing that really just awed us from the get-go was how potently and quickly the flavor—the smoke, the peat, the iodine—was imparted onto the bourbon. It’s a pretty neat spirit that dances the line between the two categories.”

While scotch is routinely aged in bourbon barrels, the reverse isn’t true for American whiskey. Even finishing bourbon in other casks after its primary maturation is a relatively new idea that only a few producers—notably Angel’s Envy and Woodford Reserve—have experimented with. Finishing American whiskey in a scotch cask, let alone an Islay cask, is rarer still. But just like any other finish, scotch whisky barrels impart their own unique flavor profile to the bourbon.

It’s the first time in ten years that these casks became available. All the rest went to breweries, and as far as I know we’re the only distillery to get them.

As a result, Smoke and Peat really does taste like a hybrid. On the nose, the whiskey leads with typical bourbon notes of sweet corn, vanilla and oak that give way to hints of chocolate, salt and iodine. Orange zest, salt and almond dominate the palate, with subtle peat and smoke asserting itself more over time. The finish is warm and lasting. It’s an unusual whiskey that throws together familiar flavors in a new and surprising way.

The first 3,600 bottles of Smoke and Peat are rolling out now in around 20 states. The 43% ABV bourbon will cost around $60. This summer, Berkshire will launch a rum that’s also finished in Islay casks. “It’s screaming good and really cool,” Weld says.

Berkshire Mountain Distillers has experimented with unusual finishes before. In 2013 and 2014, the distillery released a series of bourbons finished in beer casks from ten well-known craft breweries, including Founders, Troëgs, and Boston Beer. More recently, Berkshire launched Two Lanterns, a 4 year old American whiskey distilled from Samuel Adams Boston lager. The barrels from that project have since migrated back to Boston Beer, which will bring everything full circle by aging a new Sam Adams in them.