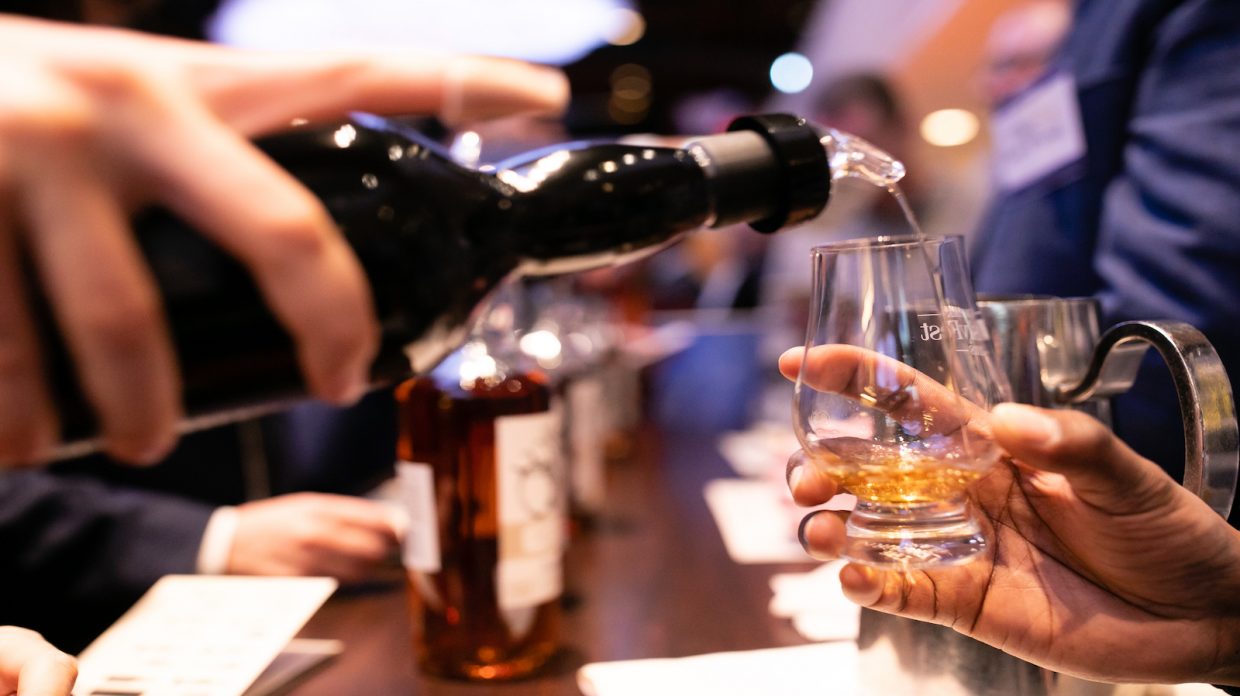 With hundreds of pours to choose from, WhiskyFest New York is a whisky lover's dream. (Photo by Tim Ryan Smith)

December is the most wonderful time of the year for many people—especially whisky lovers. WhiskyFest New York takes place on December 3 and, with hundreds of drams to choose from, it’s going to be an unforgettable evening.

But about those hundreds of drams—you can’t taste them all, so how to do you pick which ones will grace your glass? Read up on our advice for strategizing your night—or simply keep reading to see what our editors have picked as their can’t-miss pours.

Whatever route you take, be sure to keep track of what you’ve tasted using the WhiskyFest app (available for download in the coming weeks) or event program. Consider sitting in on a seminar (there are nine to choose from), free for all ticket-holders, to take a load off while still enjoying and learning about whisky. Speaking of tickets, there are still some available—perfect for an early Christmas or Chanukah present.

Scotland’s Isle of Arran Distillers—which opened its second facility, Lagg Distillery, earlier this year—is known for its sweet and warming malts, offering a unique island flavor. Get to know this underappreciated distiller at WhiskyFest, where you can try the core 10 year old whisky, along with Amarone cask-finished whisky and Robert Burns single malt.

Tyrconnell proves that when it comes to single malt, Scotland can’t have all the fun. This Irish whiskey producer earned the No.-16 spot in our 2017 Top 20 with its 16 year old, and it has an eye-catching bounty in store for WhiskyFest. Sample Original single malt, 10 and 15 year olds finished in madeira casks, and the 16 year old Oloroso & Moscatel Cask-Finished, which was just released this summer, scoring 92 points as an Editors’ Choice in our Fall 2019 Buying Guide.

The rare Japanese whisky you may still find at suggested retail price, this is a sophisticated blend of single malts from Yamazaki and Hakushu distilleries, as well as grain whisky from Chita Distillery, aged in a variety of casks; the result is a pleasingly fruity pour. Plus: Don’t miss the special Hibiki seminar with Suntory chief blender Shinji Fukuyo at 7 p.m., celebrating the brand’s 30th anniversary with a number of rare whiskies.

Earlier this year, George Dickel launched its 13 year old Bottled in Bond Straight Tennessee whiskey at an eye-popping price—just $36. Yes, $36 for a 13 year old whiskey that meets the standards of the Bottled in Bond Act of 1897—and tastes very, very good. It’s the first new release since the distillery was renamed as Cascade Hollow Distilling Co., and you can try it at WhiskyFest, along with George Dickel No. 12 and rye.

Aberlour’s cask-strength A’bunadh single malt has long been a favorite of scotch fans, prized for its intensity and elegance. When the distillery announced a companion whisky—matured fully in bourbon, rather than sherry, casks—ears pricked up. A’bunadh Alba hit shelves in the U.S. this fall and has already proven itself every bit the equal of its sibling. Be sure you do a side-by-side comparison of both whiskies at the Aberlour booth.

Although it’s better known as one of the greatest winemaking countries in the world, France also has a burgeoning whisky industry. And at WhiskyFest New York, you can try a variety of French single malts from Brenne, made in the Cognac region, and Rozelieures, a distillery in Lorraine. Do a side-by-side comparison to determine just how much terroir impacts the flavor of the whiskies.

WhiskyFest is your ticket to taste a variety of vaunted bottles, including the 2018 Whisky of the Year, Nikka From the Barrel. Also try delicious single malts like Yoichi and Miyagikyo, showcasing the distinct styles of Nikka’s two different distilleries, or Coffey Grain and Coffey Malt, which showcase the flavor profiles of grain and malt whisky made in a Coffey still.

A VIP ticket offers the best chance of snagging rare pours, but if you know where to look, there are excellent tasting opportunities throughout the night. Old Forester is bringing its entire Whiskey Row series—1870 Original Batch, 1897 Bottled in Bond, 1910 Old Fine Whiskey, and 1920 Prohibition Style—to WhiskyFest New York. Each whiskey is meant to capture a moment in bourbon history, making a tasting much more enjoyable than cracking the spine of a book.

Taste the best of autumn in a glass—Virginia Distillery Co.’s Cider Cask-Finished blended malt whiskey nabbed the No.-13 spot in our 2018 Top 20 thanks to an undeniable x-factor—its inventive blend of Highland malt scotch and American single malt, finished in a hard cider cask. The distillery’s port and chardonnay cask-finished variants will be available as well, and VIP attendees shouldn’t miss Prelude: Courage & Conviction, the preview of its first American single malt, slated for release next spring.

There are plenty of opportunities to taste new drams throughout the night, but WhiskyFest also allows you to revisit familiar pours in a new light. Take Knob Creek for example, where you’ll be able to taste the standard bourbon and rye alongside single-barrel and cask-strength versions of each, including our No.-2 whisky of 2018, Cask Strength Rye. See for yourself how single-barrel and barrel-proof offerings build upon a whiskey’s baseline profile.

Whisky Advocate will reveal the Top 20 most exciting whiskies of 2019 in the days preceding WhiskyFest New York. While we can’t tell you yet which drams made the cut this year (and which will be poured at the event—but there will be many), there are plenty of Top 20 winners from past years being poured throughout the event. Besides those already listed above, look for Glendalough 13 year old Mizunara Cask-Finished, High West Campfire, Sierra Norte Yellow Corn, Tamdhu Batch Strength, Port Charlotte 10 year old, and Elijah Craig Barrel Proof, our 2017 Whisky of the Year—and many more.

Looking to graduate from a standard dram to something more special? WhiskyFest allows you to taste entire ranges, from beginner pours up to the spendiest bottles. Glenmorangie is pouring its Original 10 year old, Lasanta 12 year old, Quinta Ruban 14 year old, Nectar d’Or, and 18 year old. Discover the difference in flavor imparted by finishing in sherry, port, and sauternes casks, and become an expert on one of scotch whisky’s most consistent, accessible, and delicious distilleries. Glenmorangie brand ambassador David Blackmore will also lead a seminar with several of these whiskies—plus some special experimental drams—at 7 p.m.

WhiskyFest New York has a massive number of options; even on a table-by-table basis there will be a fair deal of exploring to do. Waco, Texas’ Balcones is bringing all six of its core range whiskies—Baby Blue corn whiskey, True Blue 100 Proof corn whiskey, 100 proof Texas rye, 1 Texas single malt, Brimstone corn whiskey, and Pot Still Texas bourbon—along with a single barrel of single malt. See what these craft innovators are up to, and ask them about the Certified Texas Whiskey movement—a push by the state’s distillers to verify and promote whiskeys that are fully distilled, aged, and bottled in Texas.

Underappreciated even among scotch connoisseurs, this single malt distillery is bringing its full range to WhiskyFest New York. Start with the 12 year old and work your way up through 15 and 18 year old expressions before finishing with The Legacy Series Chapter One, a limited-edition whisky aged in bourbon and oloroso sherry casks that celebrates the distillery manager who originally introduced sherry maturation to Glengoyne. Learn more about the distillery’s sherry maturation in the 7 p.m. seminar led by brand ambassador Gordon Dundas—which also includes pours from sister distillery Tamdhu and the long-closed (but soon to be reopened) Rosebank.

The events will be held later in the year. 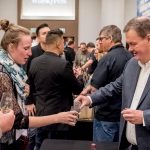 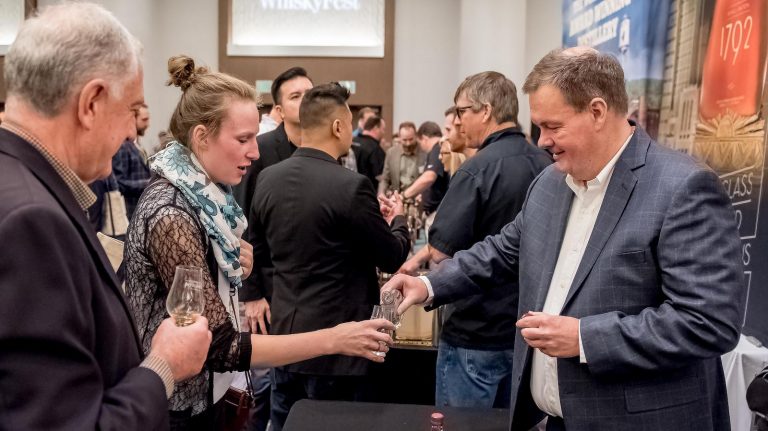