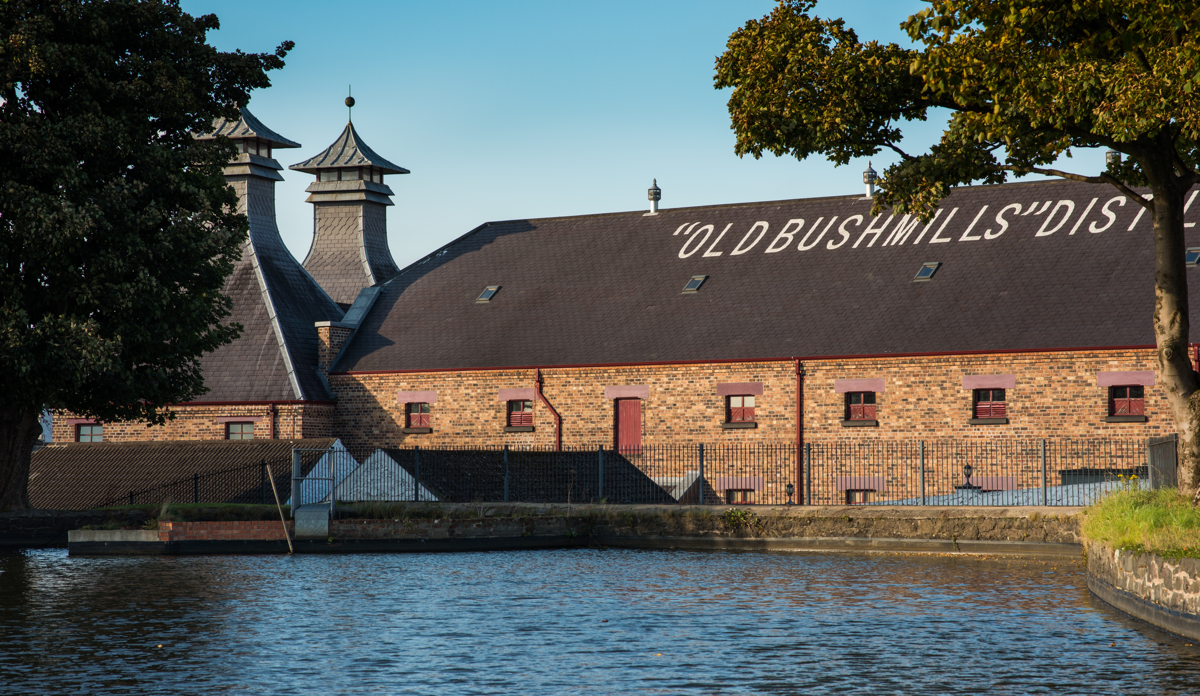 The Old Bushmills Distillery will soon have a new, expanded production facility, doubling its whiskey-making capacity.

Bushmills is set to double its whiskey output with a second distillery, set to open by 2022. Already the largest and oldest whiskey maker in Northern Ireland, Bushmills got the green light for the expansion as part of a $77 million investment plan by Mexico-based parent company Becle S.A.B. de C.V., also known as Cuervo. When it opens, Bushmills’ new single malt distillery will match the capacity of its current facility. Although the company won’t say what that capacity is, it is estimated by the book From Barley to Blarney to be around 6 million liters of pure alcohol annually.

The company plans to spend $33.7 million on the new distillery, which will be erected to the northwest of the existing site, adjacent to warehouse 17. Work will begin this year, and the project includes a new barrel store closer to the main street of the village, while a new chimney, cooling equipment, and boiler house will be hidden away behind warehousing. Over the next two decades, Bushmills will also construct 29 extra warehouses in a 62-acre area of farmland southeast of the village.

As Old Bushmills Distillery is officially recognized as a building of special architectural or historic interest, the exterior of the new facility is expected to maintain a traditional appearance, blending the old with the new, in keeping with the character of the village. Constructed in a T-shape, the distillery will have ten pot stills for its triple-distillation process—likely divided into two wash stills, four feint stills, and four spirit stills.

Bushmills may be the oldest operating distillery in Northern Ireland, but this expansion is only the latest in a long history of growth, construction, and renovation. There has been a legal distillery here since at least 1782. (The date 1608 that appears on Bushmills bottles isn’t a founding date for the distillery; it’s when when King James I issued a license to the town’s governor, Sir Thomas Phillips, to distill aqua vitae.) The Bushmills Old Distillery Company was established and licensed in 1784, probably after distilling illicitly since 1743. On November 25, 1885, a fire started in the oil store and malt house and destroyed all the existing buildings, leaving only the grain store undamaged. Within a few years, however, a new distillery had risen and, by the early 20th century, Bushmills began sporting the handsome twin pagodas seen today.

Over the past century, Old Bushmills Distillery has changed hands at least once every 20 years, and the new owners have almost always invested in production, usually in the form of warehousing. The distillery’s current owners—who also own the eponymous Jose Cuervo tequila, as well as North American whiskey brands like Stranahan’s, Tincup, and Pendleton, among other spirits—acquired Bushmills in 2014 from drinks giant Diageo, which had previously refurbished the mash house and pot stills to improve efficiency.

With Irish whiskey booming in popularity, Bushmills’ expansion comes at the right time, and follows on the heels of several successful releases. Over the past five years, Bushmills has released four chapters in the Steamship Collection in Travel Retail, launched The Sexton brand, debuted Red Bush, and shown a flair for innovation with its distillery-exclusive whiskey finished in acacia wood (see the upcoming Summer 2019 issue of Whisky Advocate for my review). The second distillery will allow Bushmills not only to continue creating its single malts and blends, but also to expand and innovate like never before.