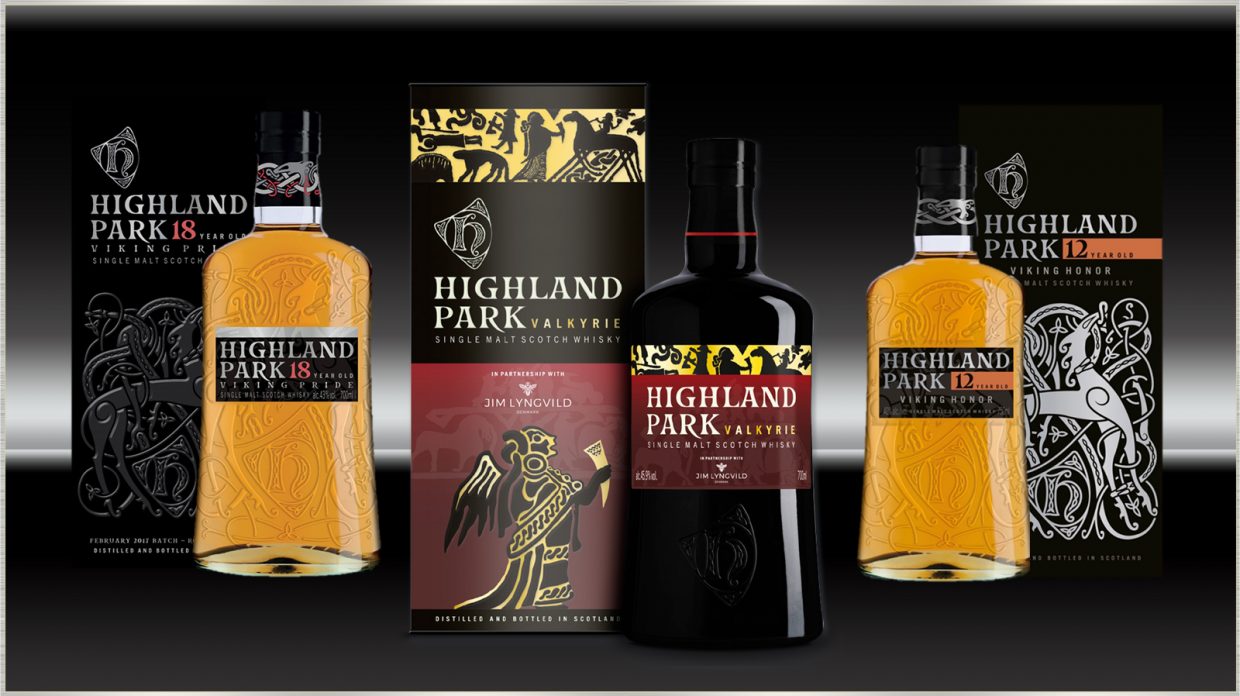 Highland Park is making several changes to its range of single malt whiskies. The brand announced a new whisky called Valkyrie, featuring a higher proportion of peated whisky than the core 12 year old, that will launch in June. The NAS, limited-edition single malt will cost $80 and replaces Highland Park Dark Origins, which is being discontinued. In addition, two new expressions—Magnus and Full Volume—will debut in the next few months. To cap it all off, Highland Park is rolling out new packaging for its core range. The redesign will hit UK shelves first, appearing in the U.S. next month.

The new packaging aims to reflect Highland Park’s identity as “the Orkney Single Malt with Viking Soul.” The Orkney Islands were ruled by the Vikings for centuries, and later the monarchies of Denmark and Norway, before joining Scotland in 1468. Because the islands have been so isolated from the mainland, Viking heritage has remained a part of their culture to this day. Highland Park’s redesign was inspired by a Norwegian stavkirke (wooden church) that is decorated with ornate carvings and features a lion battling dragons. Both the 12 and 18 year old whiskies (plus the 10 year old, available overseas) will get the new packaging, along with additional names that reflect the Vikings’ nine noble virtues—Viking Pride for the 12 and Viking Honour for the 18.

The redesign leaves out Highland Park 15 year old—that whisky is being phased out of the line, along with Dark Origins. Both the 15 year old and Dark Origins were originally meant to be limited-edition expressions, but were so popular that they’ve lingered for much longer than intended. Now Highland Park has reached the point that it doesn’t have enough stock to keep up with demand for these particular whiskies. Dark Origins will be around in the U.S., Canada, and the UK for about a year, but the 15 year old hasn’t been in production since mid-2016, so whatever you see on the shelf is the last of it. Highland Park 21 year old, available in certain markets, is also going away. If you’re a fan of any of these whiskies, stock up now.

Whisky lovers will not be left bereft of Orkney single malt, however. Highland Park Valkyrie is the first in the three-part Viking Legend series, which will include Valknut in 2018 and Valhalla in 2019. In addition, Highland Park Magnus—named for distillery founder Magnus Eunson—will hit shelves in August. Matured in sherry-seasoned and ex-bourbon American oak casks, it will be 40% ABV and sell for $40 a bottle. Highland Park will also launch Full Volume in October. The limited-edition expression was distilled in 1999, matured in first-fill ex-bourbon American oak casks, and bottled this year. Clocking in at 47.2% ABV, it will sell for $100 and is the first in a series of bottlings that will feature a new expression annually.