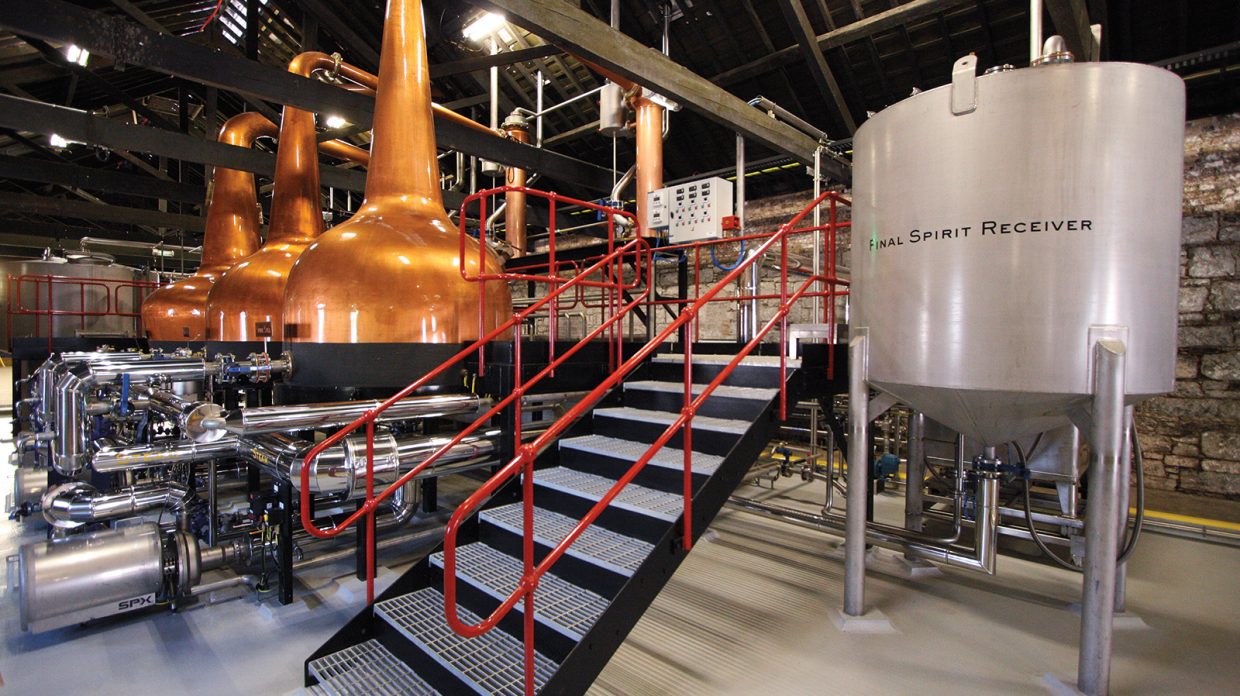 Triple distillation has returned to the Old Midleton Distillery in County Cork, Ireland for the first time in over 40 years. Irish Distillers built a new microdistillery, with the scope to produce up to 400 casks per year. Given the vast capacity of the existing operations at Midleton Distillery to produce a variety of single pot still and grain whiskey styles, you would be correct to assume that this is not directly about meeting the stock requirements for the increasing global demand for Irish whiskey.

Brian Nation, Midleton’s master distiller, takes us inside the former warehouse to explain the three main functions of the new facility. “Firstly, it’s about education and training,” he says. “It gives distillers the hands-on opportunity to run totally manual distillations. They tend to learn more that way. There’s a high level of automation in the main plant, which is great for consistency and reproducibility, but sometimes people miss out on fully understanding the process.” In other words, single pot stills for single pot skills. “When you have a manual plant and the distiller has to physically go and open individual valves, I think you learn more and you understand why you’re doing it.”

Referred to as “The Micro” by Midleton insiders, the distillery was commissioned in September 2015, housing the apparatus for triple distillation, namely a scaled-down wash, feints, and sprit still. Each Forsyths-built pot is shaped slightly differently than its neighbor. The paintwork, copper, and storage vessels are gleaming and immaculate because of the second reason for its existence: to form part of the tour for the thousands of eager visitors to the Jameson Experience. “Before the microdistillery, people would come to the visitor center and wouldn’t actually see a working distillery,” says Brian, “whereas now, they can actually physically experience distillation in progress.”

Karen Cotter has been appointed as the distiller, under Brian’s mentorship. She’s a bright talent from the Jameson Graduate Distiller Program and certainly a name to watch, but she’s there for a reason. “Innovation,” Brian states with intent, outlining its third purpose. Look at it this way: experimental batches in the main distillery risk interrupting normal production, putting the team behind on its targets, and they can be rather costly if the ideas don’t work out. For starters, the wash still at Midleton Distillery has a capacity of 75,000 liters, whereas the craft distillery wash still is a thirtieth of the size at only 2,500 liters. “Down here, you’re dealing with smaller volumes and you can actually play around with a lot of different innovations,” he says, adding, “The ones that we feel are really working, we can transpose back up to the main plant.”

At present, Irish Distillers is using the microdistillery for small batch distillation, reduction, and filling as they pursue new and old styles of Irish whiskey.  The wash is made from a variety of cereals and is brought over from the main Midleton site. There are plans to add a microbrewery inside the microdistillery warehouse. That next phase will only enhance the benefits of the project and further validate Brian Nation’s triple justifications, driving the new enterprise forward.