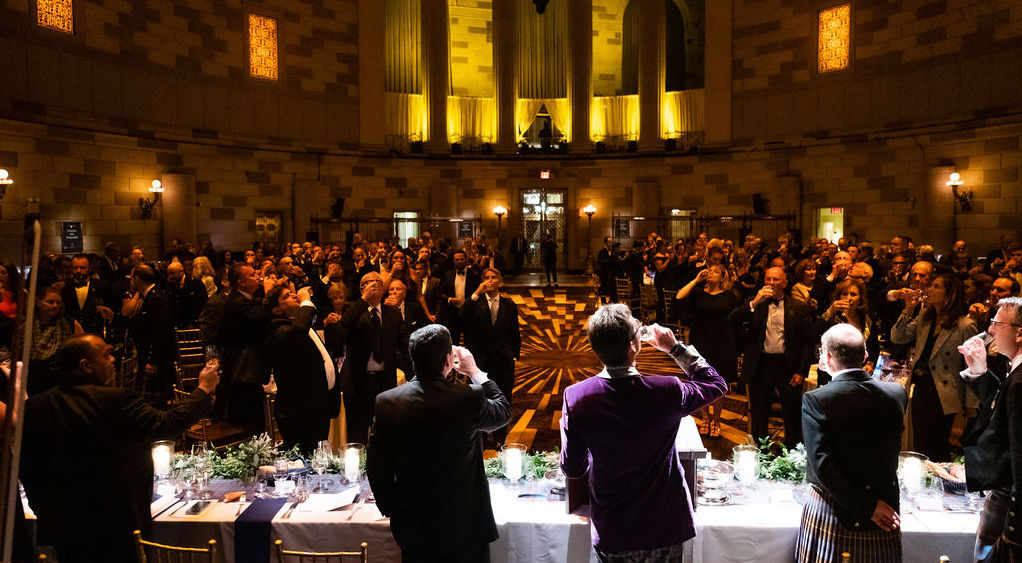 Scotch industry group the Keepers of the Quaich launched its USA chapter in New York City on September 25, toasting to camaraderie and future success. (Photo by Tim Ryan Smith)

Last night in New York City, the biggest leaders in scotch whisky came together to toast to the start of an exciting new moment. The Keepers of the Quaich, an industry group that celebrates individuals who promote and support scotch worldwide, opened its new USA chapter with a banquet ceremony at Gotham Hall attended by 175 people.

The biggest distillers of Scotland were all represented, with companies like Diageo, Pernod Ricard, William Grant & Sons, Beam Suntory, and many others pouring some of their finest whiskies during a cocktail hour. A series of toasts punctuated the formal dinner, which included remarks from British consul Antony Phillipson and Torquhil Campbell, the Duke of Argyll, a spirited recitation of Robert Burns’ Address to a Haggis, and plenty of bagpipes and traditional Scottish music.

Marvin R. Shanken, editor and publisher of Whisky Advocate, was inducted into the Keepers of the Quaich in its inaugural ceremony in 1988 and served as a member of the event’s steering committee. “The entry of Keepers of the Quaich into the U.S. is a major step for the scotch industry and great news for whisky lovers everywhere,” he said. “As one of the first members inducted and the publisher of the world’s leading whisky magazine, I am proud to represent this prestigious organization.”

The Oscars of Scotch

“Being a Keeper is a bit like being awarded an Oscar,” says Peter Prentice, the society’s chairman and global VIP relationships director at Chivas Brothers. “The Keepers give us the opportunity to showcase the very best of Scotland and scotch whisky in a way that reflects the leadership position that scotch whisky has in the world.” The Society’s stated mission is “to recognize the outstanding commitment of those who produce or promote the world’s finest spirit.”

Pointing to the collegiality across rival companies promoted by the society, Prentice compares it to creating a blended scotch. “When the whisky industry really took off in the mid-1800s, [it] rapidly learned that by blending whiskies together, you could make them a lot more palatable and pleasant—that whole expression of the whole being greater than the sum of its parts, and the art of blending and so forth,” he says. “We rely on each other in a symbiotic relationship in many ways.”

The Keepers of the Quaich was founded in 1988 by United Distillers, Allied Distillers, Justerini & Brooks Ltd., The Highland Distilleries Co., and Robertson & Baxter. (Mergers and industry changes over the years mean that, today, the founding partners are listed as Chivas Brothers, Diageo, Edrington, George Ballantine & Son, and Justerini & Brooks.) The society inducts 90 new members—and promotes ten existing members to the status Master of the Quaich—annually in ceremonies held in spring and fall at Blair Castle in Scotland. The stately residence is the seat of the Duke of Atholl, the chief of Clan Murray and a patron of the Keepers who commands Britain’s only private regiment, the Atholl Highlanders. These kilted infantrymen serve as the honor guard, greeting guests with bagpipes. 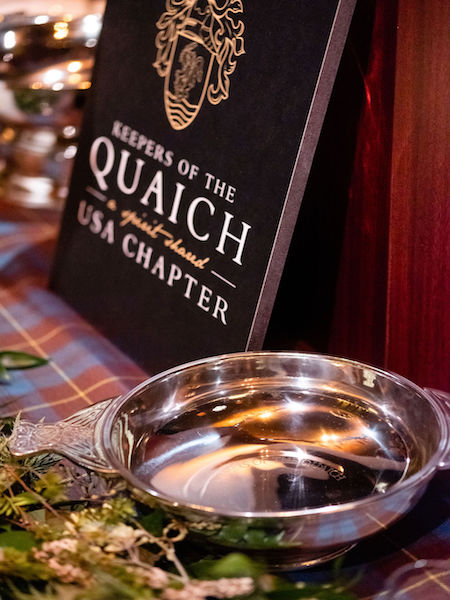 The two-handled quaich is often seen as a symbol of fellowship. (Photo by Tim Ryan Smith)

While details of the ceremony are deliberately kept secret, it does involve the use of a ceremonial quaich measuring 24 inches across and engraved with barley designs, and inductees are required to swear an oath. Scottish symbolism and heritage play a large role; the society has its own tartan, as well as a special coat of arms, shield, and crest. Its motto is “Uisgebeatha Gu Brath,” Scots Gaelic for “Water of Life Forever.” Yet despite its obvious Scottish identity, across the globe, the Keepers has ten international chapters in Australia, Brazil, Germany, India, the Netherlands, the Nordics (Sweden, Norway, Finland, Denmark, and Iceland), South Africa, Turkey, the United Arab Emirates, and now the United States.

“America is, without a doubt, the most important market for Scotch whisky in the world, with the most Keepers and Masters of any other country,” Prentice says. “I’m very excited about the America chapter because you’ve got so much to play with over there. You know how to do things well; you know how to do things big. The USA is the land of the free and the melting pot for so many people from around the world. In many ways, the spirit of the United States of America is so closely aligned to the spirit of the Keepers of the Quaich in terms of putting people together. I think there’s a lovely affinity.”

What Is A Quaich?

While most whisky drinkers today imbibe from a glass, hundreds of years ago, the Scots used a shallow, two-handled vessel called a quaich (in Scots Gaelic, “cuach” or cup). Traditionally made from wood, versions crafted in silver and other materials began appearing the 17th century.

The quaich’s two-handled design is often touted as a symbol of fellowship and trust. A person can only drink from it using both hands, meaning that, in the old days, the drinker couldn’t keep a hand on their sword or dagger—they had to trust that no one around them intended any harm. Fortunately, the Keepers of the Quaich’s membership has no such worries, but continues the tradition in the name of camaraderie and goodwill.