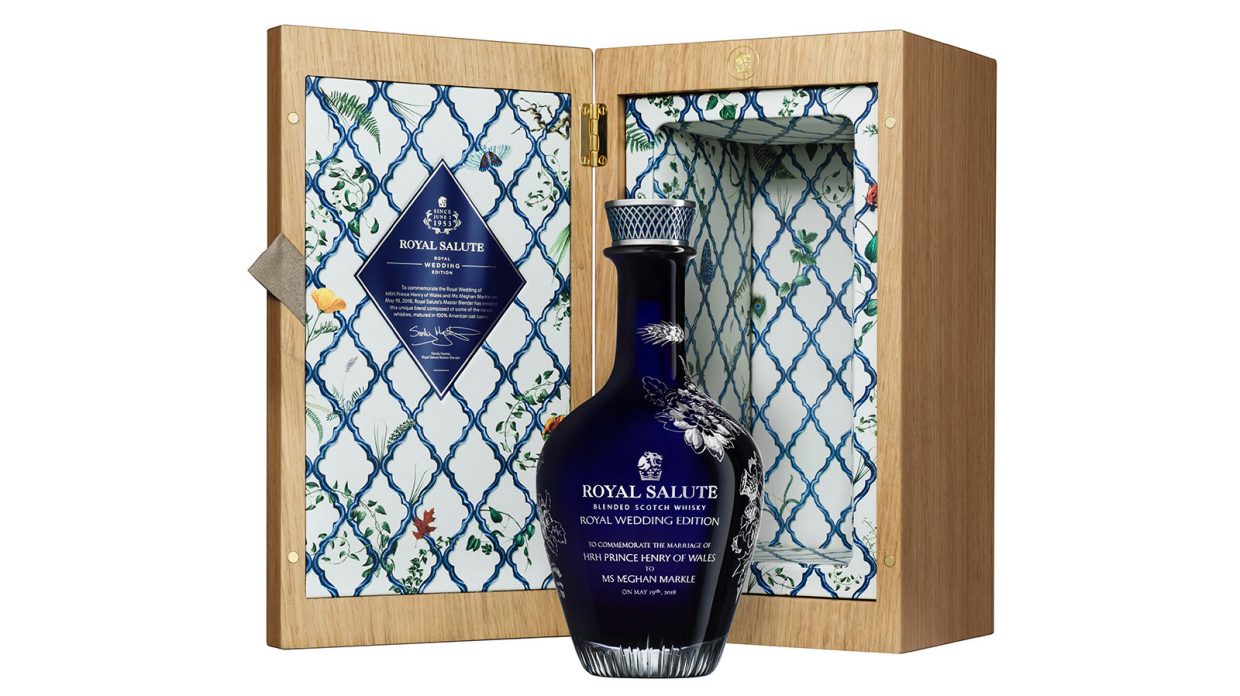 Royal Salute has created only 70 bottles of their Royal Wedding Edition whisky.

Wedding bells will ring across the Atlantic and beyond as Prince Harry marries Meghan Markle this Saturday, May 19th at St George’s Chapel, Windsor. As with any nuptials, the Royal Wedding 2018 calls for a toast, and scotch whisky blender Royal Salute is releasing a limited edition whisky just for the occasion. Never mind that the ceremony starts at 7 a.m. EST: put on your best Burberry, grab your finest glassware, and prepare for regality.

Only 70 bottles of Royal Salute’s Royal Wedding Edition have been created, with the married couple receiving one as a gift. Those remaining are each priced at $10,000. The whisky, bottled at 54.5% ABV, is encased in a Dartington Crystal decanter, and in honor of the bride, American actress Meghan Markle, the blend has been fully matured in 100% American oak casks, a first for Royal Salute. Crafted by Chivas Brothers’ Master Blender Sandy Hyslop, the release includes whisky from the Glen Keith, Longmorn, Strathisla, Alt À Bhainne, Braeval, Strathclyde, and now-closed Caperdonich distilleries. Though the Royal Wedding Edition bears no age statement, all single malts included are 21 years or older, some as old as the bride (36) and groom (33) themselves.

“It was a pleasure to create such a special whisky for HRH Prince Harry and Ms Meghan Markle,” Hyslop said in a press release. “By marrying together some of the oldest and rarest whiskies in our portfolio, and aging them in American oak casks, I have created a harmonious blend to match the coming together of such an iconic couple.”

The special release continues Royal Salute’s tradition of commemorating the British monarchy. The brand first launched in 1953 with the coronation of Queen Elizabeth II. The name itself references the 21 gun salute performed during royal occasions. In 2015, the company released a 62 Gun Salute expression for the gun rounds fired on royal anniversaries at the Tower of London. That whisky scored 94 points, so expectations for the Royal Wedding Edition should be about as high as its price tag.