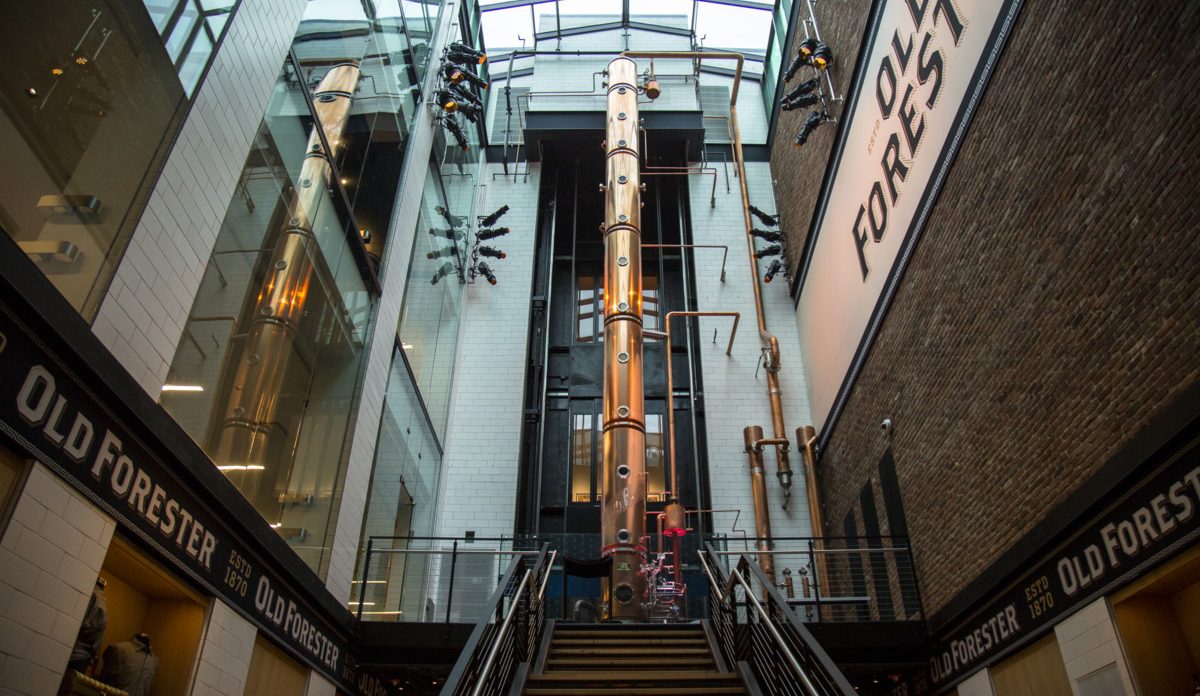 Before getting into the week’s new whiskies, there’s an update on the recently released “Star Trek” whiskey, James T. Kirk straight bourbon. Announced in June, the bourbon’s initial price was $60 a bottle, and the website for the bourbon stated it was between 4 and 12 years old. When I asked for clarification, the bottling company’s representative told me the bourbon was 10 years old and sourced from Tennessee. A Whisky Advocate reader who pre-ordered the whiskey recently emailed to say he had received it, and what he got was actually a 12 year old. When I asked the company, Silver Screen Bottling Company, about the discrepancy, it further clarified that James T. Kirk will be bottled in batches, with each batch varying in age from 4 to 12 years old. Meanwhile, the whiskey’s price has shot up from $60-$70 to $300 for the 12 year old batch.

For those who aren’t interested in Star Trek whiskey, there are plenty of other new releases to anticipate. Old Forester has announced the fourth and final release in its Whiskey Row series, 1910 Old Fine Whisky. This bourbon is based on a historic bottling that was the first documented evidence of double barreling—putting mature bourbon into a second new charred oak barrel. It’s $65 a bottle and widely available.

Islay’s Kilchoman Distillery is rolling out a sauternes cask-finished single malt, a departure from previous releases which were matured entirely in the sweet wine casks. This version is said to have more balance. At 50% ABV and $100 a bottle, there are 1,440 bottles available in the U.S.

Forty Creek Distillery in Ontario has released its annual limited-edition whisky. Forty Creek Unity combines a blended whisky finished with “mocha wood” staves with a 10 year old corn whisky and some port-style wine that aged for 15 years in Forty Creek’s own barrels. The whisky costs $75, and 3,000 bottles are available in the U.S.

In Speyside, Tamdhu has announced that it will be phasing out its 10 year old single malt and replacing it with a 12 year old. The new whisky is rolling out globally at the moment, with its U.S. debut set for 2019. When it arrives, Tamdhu 12 year old will be widely available at $65 a bottle.

The Chicken Cock bourbon brand is releasing a 10 year old “double barrel” whiskey sourced from MGP Distillery. Unlike Old Forester 1910, this “double barrel” phrase refers not to a rebarreling into a second new charred oak barrel, but rather to the fact that Chicken Cock’s distiller blended two barrels together for each batch of the whiskey. Chicken Cock 10 year old Double Barrel is 52% ABV and costs $250, with 1,980 bottles available.

Texas’ Balcones Distillery is celebrating its tenth anniversary this weekend and releasing two special single malts in honor of that event. Brujeria is finished in oloroso and PX sherry casks and bottled at 62.9% ABV. It will be available in Texas for $129. Hechiceros is finished in port casks and bottled at 61.5% ABV, with bottles available in Texas, California, Florida, Illinois, and New York for $99.

Out in Seattle, Copperworks Distilling is also celebrating an anniversary, its fifth. The distillery is releasing a single cask single malt, aged in French oak. It’s $76 and available at the distillery and online. 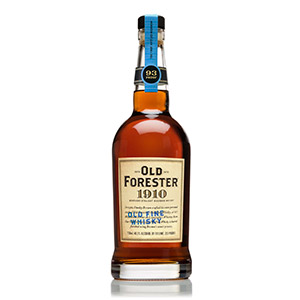 The final release in Old Forester’s Whiskey Row series—which also includes 1870 Original Batch, 1897 Bottled-in-Bond, and 1920 Prohibition Style—1910 Old Fine Whisky is an homage to a historic bottling called Very Old Fine Whisky. In 1910, a fire at Old Forester Distillery caused the bottling line to be shut down, but a vat of mature bourbon was already waiting to be bottled. Since it couldn’t be, the whiskey was moved into new, charred oak barrels—the first documented instance of a bourbon being finished/re-matured in another barrel. This new bourbon was also fully matured, then re-barreled into new lightly toasted, heavily charred barrels. Its entry proof for the re-barreling was 50% ABV, the same as the original Very Old Fine Whiskey.

Woodford Reserve released its Double Oaked bourbon in 2012, kicking off what has become a fairly common trend of “double barreling” whiskey—putting mature bourbon into a second set of new charred oak barrels to impart additional flavors from the wood. Woodford happens to be a sister distillery to Old Forester, so maybe master distiller Chris Morris was subconsciously channeling his whiskey-making forebears when he pioneered Double Oaked. Morris is also master distiller at Old Forester, and was surely thrilled and delighted to find historical evidence of this practice existing over a century ago. 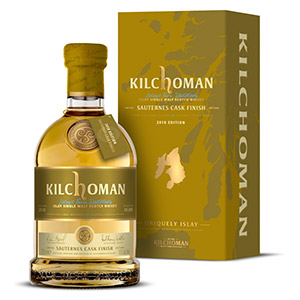 This whisky was distilled in 2012 from barley peated to 50 ppm and matured in ex-bourbon casks, then finished for five months in sauternes casks.

Whereas Kilchoman has previously released fully-matured sauternes cask single malts, this whisky is only finished in sauternes casks, which the distillery says provides more balance. The 2017 release of Kilchoman Sauternes Cask Matured scored 86 points in the Buying Guide. It will be interesting to taste this year’s new version which has much less sauternes cask influence. 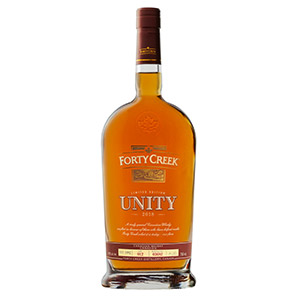 Forty Creek Distillery in Ontario releases a limited-edition every fall, typically available only at the distillery during its annual Whisky Weekend. This year, however, the whisky is for sale in the U.S. Unity was put together by master blender Bill Ashburn, with the input of five Forty Creek fans who assisted in choosing the final blend. Ashburn started by finishing a blend of whiskies with “high mocha” oak staves that have been toasted to bring out chocolate and earthy notes. He then combined that whisky with 10 year old corn whisky, and added in some port-style Starboard wine that had aged for 15 years in Forty Creek barrels.

Added wine?! Don’t worry, this is still whisky: Canada’s regulations allow up to 9.09% of a Canadian whisky to be comprised of wine or other aged spirits. What’s extra special about this particular blend is how the wine got to Forty Creek. Canadian whisky reviewer Davin de Kergommeaux, who gave Unity 92 points in the current Buying Guide, explains: 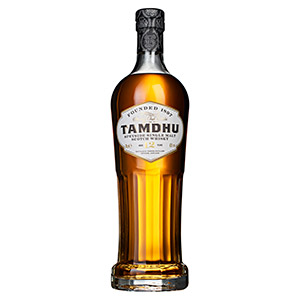 Tamdhu is phasing out its 10 year old single malt, replacing it with a version that’s two years older. The 12 year old whisky was matured in first-fill and refill American and European oak oloroso sherry casks. It’s currently rolling out abroad and will be launching in the U.S. in 2019.

Many single malt brands, like Macallan and Highland Park, emphasize their sherry cask aging. Matured only in sherry casks, Tamdhu is less well-known than some of its peers, but no less flavorful, consistently scoring well in our Buying Guide. Tamdhu Batch Strength ranked at number 8 of the 2017 Top 20. We’re looking forward to trying this new, older whisky. 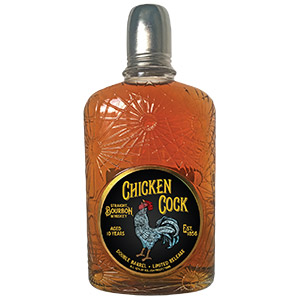 Made with a mashbill of 70% corn, 21% rye and 9% malted barley, this 10 year old bourbon was distilled at MGP and aged and bottled in Kentucky. “Double Barrel” refers not to a finishing barrel or second charred oak barrel, as you might expect, but to the fact that master distiller Gregg Snyder blended just two barrels together for each batch of this bourbon, creating a total of six batches. (The batch number is noted on the back label.)

A historic brand, founded in 1856, Chicken Cock has had a checkered past, going out of business for decades in the mid-20th century. A few years ago, the brand was relaunched and has been adding higher-end expressions—like an 8 year old (88 points)—alongside its core Heritage Reserve bourbon. 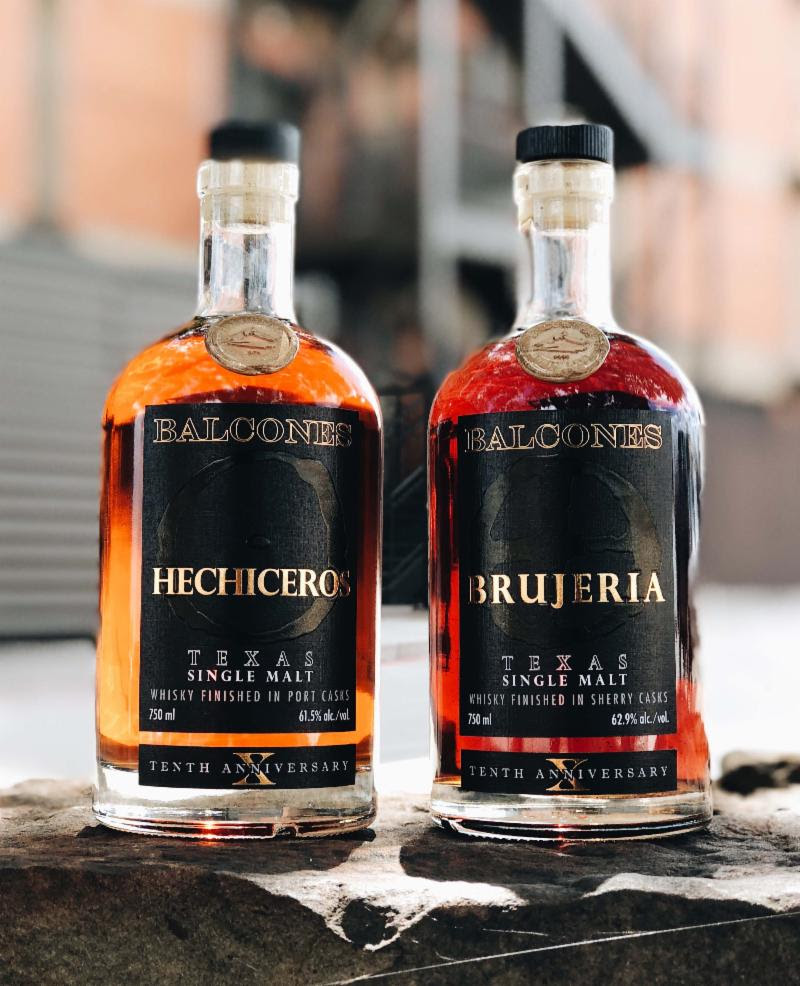 Balcones is releasing two limited-edition single malts on Saturday, October 13th. Brujeria (“witchcraft” in Spanish) was finished in oloroso and Pedro Ximénez sherry casks and bottled at 62.9% ABV, while Hechiceros (“sorcerers”) was finished in port casks and bottled at 61.5% ABV. Both are available in Texas, and Hechiceros will also likely be sold in California, Florida, Illinois, and New York.

Balcones is celebrating its tenth anniversary this month, hosting a party on October 13th where these whiskeys will be released. More limited-edition whiskeys are coming in the next couple of months, including a cask-strength wheated bourbon and a couple of variations on Brimstone (88 points), the distillery’s super-smoky corn whiskey. 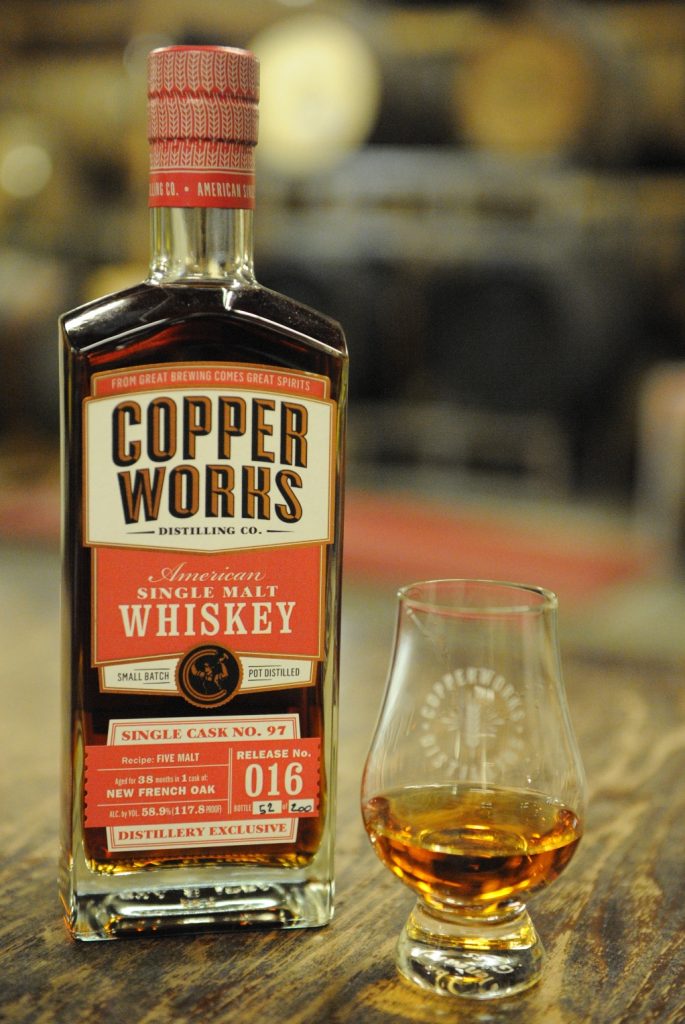 Seattle’s Copperworks Distillery is also celebrating an anniversary this month—five years since it opened. In honor of the event, the distillery is releasing its second single cask whisky, a single malt that was aged in lightly charred French oak barrels for 38 months. The whisky is available at Copperworks’ tasting room and online store.

One of many Seattle distilleries making single malt and other whiskeys, Copperworks typically uses American oak barrels for aging. This release is its first using French oak; the distillery says that it has flavors of stewed fruit, figs, white pepper, and maple. 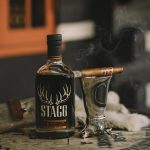 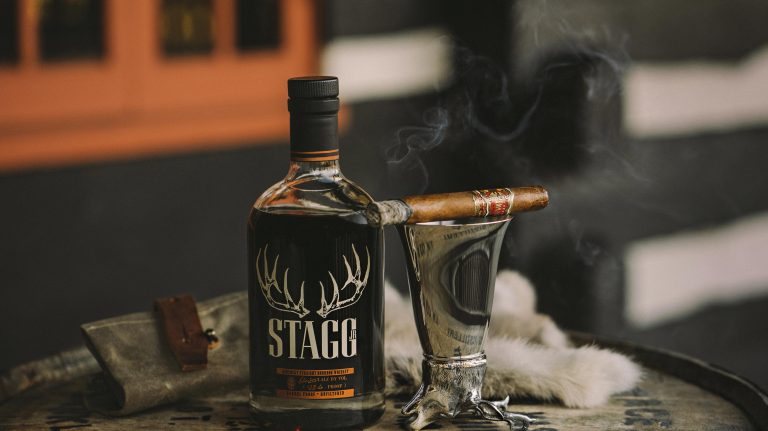 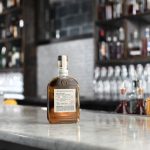 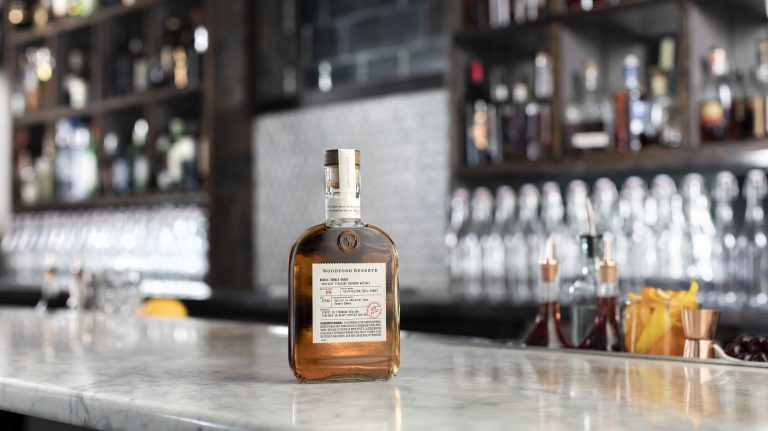 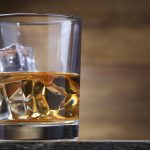 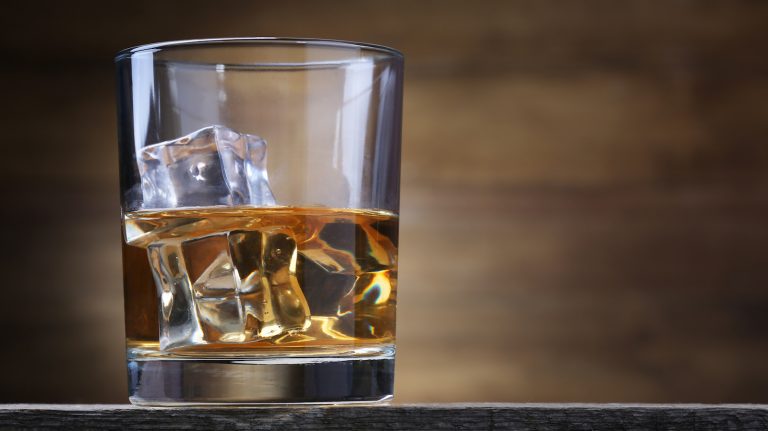