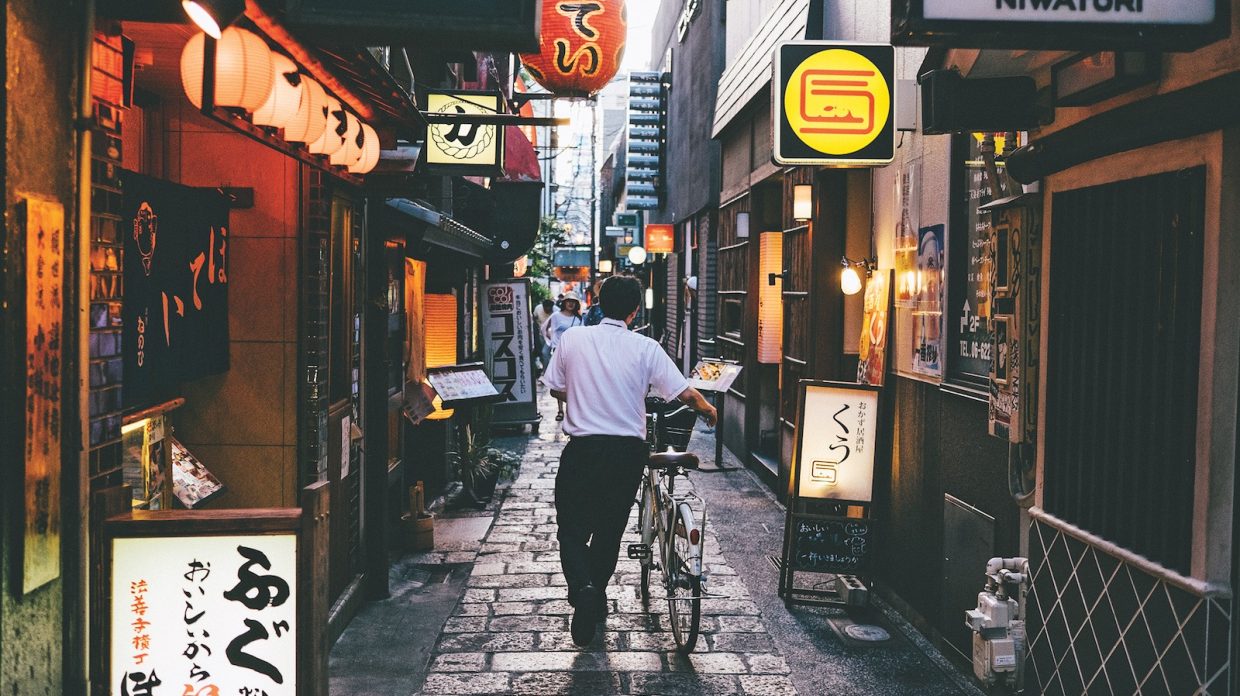 Stroll the streets of Osaka where you'll find over 3,000 bars and restaurants. (Photo by Cavan Images/Offset)

Forty floors up, from my window seat in 40 Sky Bar, I hover above the impossibly packed streets of Osaka with their notoriously fast walkers (and drivers). Up here I feel relaxed, almost weightless. The dense urban sprawl bleeds into blue-green mountains as jets descend through the afternoon light. Nearby, two women relish the popular afternoon tea service ($50), their Birkin bags resting on adjacent seats as a server glides past with a tray of small jeweled pink and green cakes. A mile distant is the gleaming twin-towered Umeda Sky Building, capped with an observation deck with views across the busy port to distant Awaji Island. We are nearly a hundred feet higher than that deck. And up there, they don’t serve impeccable Old-Fashioneds with perfect ice spheres. They do here.

Countless bars in Japan offer spectacular views. This one also offers a glimpse of history. Forty stories below the Sky Bar’s perch in the Conrad Osaka Hotel, the slow-moving Yodo River meanders through the city, then spills into Osaka Bay. In the autumn of 1923, two massive copper pot stills, each weighing two tons, were loaded on a steamship and ferried upstream to the construction site of the country’s first commercial whisky distillery—Suntory’s Yamazaki.

About six years later, the first Suntory whisky emerged. There’s whisky history throughout Osaka, more so than in any other Japanese city. If you love Japanese whisky—or just whisky, full stop—Osaka is your can’t-miss destination. It remains the country’s greatest whisky city.

Osakans are frank and funny, in contrast to the reserved and distant residents of Tokyo, who come from all over the country and tend to ditch their local dialects upon arrival. You might approximate a “Lost in Translation” vibe of Tokyo, but trust me, Bill Murray would be much more at home in Osaka, with its delicious food, legendary comedy scene, and passionate baseball fans. Osaka is a place where people are born, grow up, and rarely leave. Why would they?

“I prefer drinking in Osaka better—people are friendly,” a young Tokyoite confides to me later that evening. We’re in the One Shot Bar Keith in Shin-Osaka, one of the few Japanese whisky specialty bars in the country. The man, in town on business, fires up an American Spirit cigarette and polishes off his dram of Chichibu White, the bar’s house whisky.

“Make no mistake, Tokyo has truly excellent bars,” concedes the bartender, Teruhiko Yamamoto, who also owns the place. (He’s right; it does.) But here in Osaka, he notes, “everything is more compact than in Tokyo. Plus, there are more distilleries nearby.” That’s a big plus. From Osaka, a number of vastly different distilleries, all open to the public, are doable: Yamazaki; White Oak, makers of Akashi; tiny Nagahama; and if you’re up for a bullet train ride, the newly built Sakurao Distillery in Hiroshima. 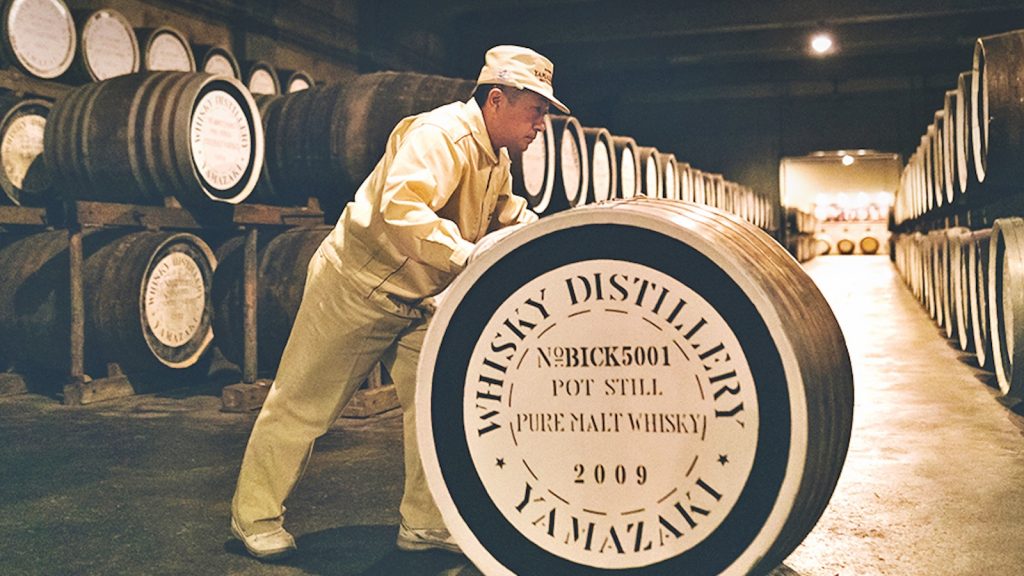 Yamazaki was the first Japanese distillery to use the western blueprint of whisky-making, borrowing practices and techniques from established scotch houses.

Ding! Ding! Ding! Signal lights flash as a group of camera-clutching whisky pilgrims waits at a railroad crossing. A sleek JR train rumbles by, the gates lift, and we scurry across the tracks. It was across these rails, the Tokaido Main Line, that in 1923 those massive Yamazaki stills were moved in the dead of night, after the trains had stopped running. Ahead, the Yamazaki Distillery cuts a striking pose against a mackerel sky. At the end of our 100-minute tour, sunlight hits the wide array of stills, in all shapes and sizes in the still house, creating a stunning tableau worthy of whisky worship. Here, it all began.

Although Japan had been distilling rice into shochu since the 15th century, Yamazaki was the first to produce whisky using a western blueprint. A young, English-speaking chemist named Masataka Taketsuru, who studied at the University of Glasgow and apprenticed at three distilleries, including Longmorn and Hazelburn, was sent to Scotland by Settsu Shuzo, a spirits company that aimed to make Japanese whisky. After the business plan fizzled, another company hired him with the same idea—making a Japanese whisky. That company was Suntory—called Kotobukiya at the time, and run by Shinjiro Torii, a liquor merchant with bigger dreams. Taketsuru became the distillery manager, and before long, those giant stills were heading up the Yodo.

While in Scotland, Taketsuru pursued more than just whisky, returning to Japan with his Scottish bride, Rita. Although they never had children, they are regarded as the mother and father of Japanese whisky, with every whisky distillery tracing their lineage to Taketsuru. After ten years with Suntory, he went on to found Nikka Whisky on the northern island of Hokkaido. The guy who’d sent him to Scotland, Kiichiro Iwai, set up the first Mars Whisky Distillery using Taketsuru’s notes. Today the location is a children’s park, but a plaque commemorates it as the location of the original company, Settsu Shuzo.

In retrospect, it seems inevitable that Osaka would become the birthplace of Japanese whisky. By the early 20th century, Osaka was also a center of scientific research, chemistry, and pharmacology. Stir in a tradition of delicious food, and you have the recipe to bring whisky to life.

Osaka’s food is a delight to the senses, and many of Osaka’s whiskies—notably Suntory’s blends—reflect the impeccable attention to detail and artisanship that is applied to all food and drink, however humble. Osaka’s kitsune udon soup, with its clarity, delicate aromas, and savory broth laced with pleasant sweetness, is a feat of masterful balance. The city’s whisky is equally refined, and approachable, a quality that has made Japanese blenders among the most respected in the world. Beam Suntory recently engaged the skill of master blender Shinji Fukuyo to lend his blending prowess to a new bourbon, Legent.

A Bounty of Bars

Nighttime in Kitashinchi. As the sun sets, this entertainment district comes alive with a dazzling array of illuminated signs calling out to the businessmen ready to spend. Kitashinchi is unfairly compared to Ginza, Tokyo’s ritzy district. Ginza offers around 1,000 places to eat and drink; Kitashinchi closer to 3,000. Rather than Ginza’s glitzy designer boutiques, Kitashinchi is dotted with liquor stores and flower shops. The flower shops cater largely to the hostess and host clubs, where well-dressed young men and women are employed to light cigarettes and pour whisky with a side of flirtation—and a premium price. This is where you go to drink. 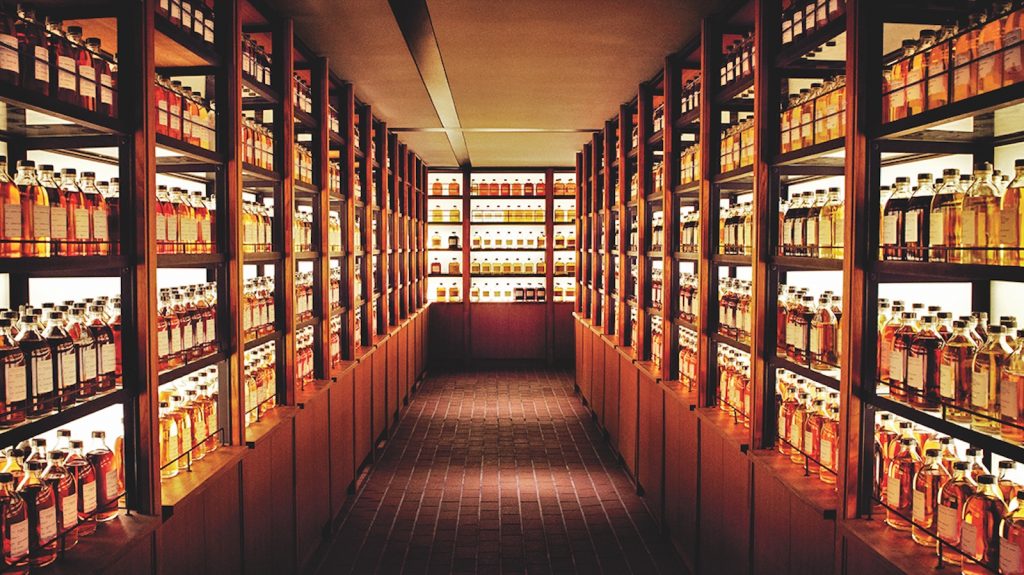 The Yamazaki Whisky Library has several thousand bottles on display in varying hues of amber and mahogany.

A lifetime could be spent exploring every bar. No matter if you are looking for a fine whisky selection, a craft beer bar, or an English-speaking pub, you will find it here. There are places to get fancy cocktails, like Bar Yoshida, and places to get working-class style Highballs, like Juso Torys Kitashinchi branch, which is one of the few remaining Torys Bars, the classic salarymen’s bars that flourished after World War II. Any of the several Bar Samboa locations serve pre-war style Highballs—whisky, soda, lemon twist, no ice.

Then there are places offering truly rare whiskies from Japan and beyond. At Bar Elixir-K, bartender Takuya Matsumoto pulls down a bottle of Extra Nikka from the 1960s. “Nikka is now bottled at 700 ml, but this is 640 ml,” he points out. The bar is lined with well-aged whiskies like Yamazaki 25 year old, as well as some grand old dames like bottles of Glen Moray and Strathmill dating to the 1960s.

“This was a workingman’s whisky,” says Matsumoto, pouring a taste of the vintage Nikka. I nose the whisky; there’s a faint aroma of smoke. I take a sip and it’s almost like drinking water. This would appeal to a generation that grew up on sake and had yet to develop a taste for smoky Islay whiskies beloved by so many Japanese today. Next, I order the bar’s version of the Prohibition-era cocktail The Last Word, which substitutes Port Charlotte 10 year old for gin, giving the tangy-sweet drink a wonderful smoky finish. “Islay whisky works surprisingly well in that cocktail,” Matsumoto says. Leave it to Japan to improve even the classics.

South of Kitashinchi is Minami, another nighttime mecca built on grid-streets, bisected by a canal, ablaze with LED billboards, and packed with bars, restaurants, and people. For many, the choice tipple has an American accent. In the wake of Suntory’s acquisition of Jim Beam in 2014, Osaka is in the midst of a bourbon boom. Millennials gather at gastropubs and fried-dumpling places to sip fizzy East-meets-West Jim Beam Highballs, called Biimu-hai.

Even Osaka’s suburbs have great whisky bars. A 22-minute subway ride away, transfer included, to Moriguchi Station, and not far from Panasonic’s headquarters, Rogin’s Tavern calls out with a neon glow.

Inside, the three-story tavern is a monument to American whiskey. A jukebox plays downstairs, and the walls are lined with bourbon and rye. There are vintage ads and memorabilia, the walls dotted with doodles and signatures of American whiskey luminaries. “Those whiskeys right behind you are all pre-Prohibition,” Seiichiro Tatsumi says in English, gesturing toward very old bottles of Old Crow, Old Grand-Dad, and Old Hermitage, as well as a Pendennis Club bottling of J.B. Beam, and a bottle of Green River bourbon with the label proudly declaring it “The whisky without a headache.” There’s stuff from the late 19th century here. But this is a whisky bar, not a museum. It’s all here to be sipped.

“This was distilled in 1916 and it’s very good,” Tatsumi says, producing a bottle from behind the bar and pouring a dram of bottled in bond “de-luxe” bourbon from the American Medicinal Spirits Company, when doctors could write a prescription for booze. I nose the glass. I’m transported back to my grandmother’s house, rummaging around the cellar for homemade peach jam to spread on toast. There are stewed fruits, old books, metallic notes, dry wooden stairs—nostalgic American aromas that I have never smelled in Japan. I take a sip; the finish is long and lingering. I wish it would never end.

Tatsumi fell hard for vintage whisky as a young man, after tasting his first bourbon at Osaka’s Rihga Royal Hotel. “In America, I drive around at night, looking for liquor stores, and ask them for old whiskey,” he says. He now has another home, Kentucky, a state that has bestowed him the honor of Kentucky Colonel and which is his home base for American whiskey hunting. How many bottles have you bought in America? “Maybe five thousand,” he says with a shrug and a smile. “I bought those McIntosh speakers there, too.” Jazz plays late into the night, and I ask Tatsumi to make me an Old Fashioned. Instead of a sugar cube, he spoons in finely powdered Japanese sugar. “I do my Old Fashioned a little different,” he says. Like so many things in Osaka, it is done well. 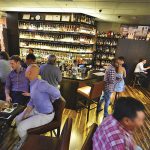 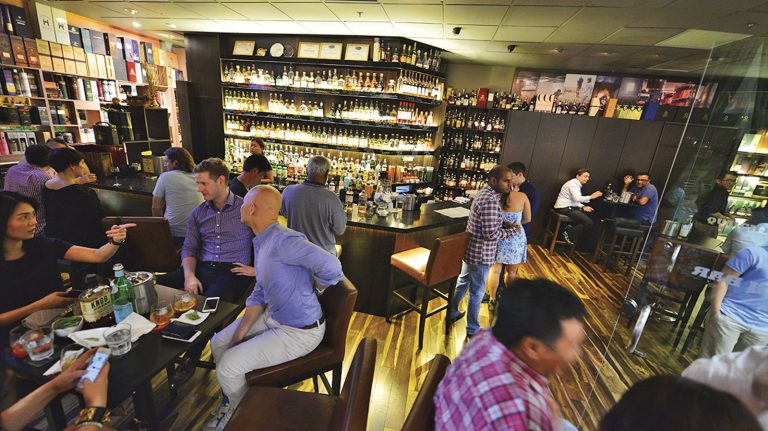 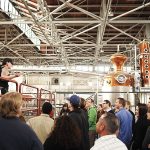 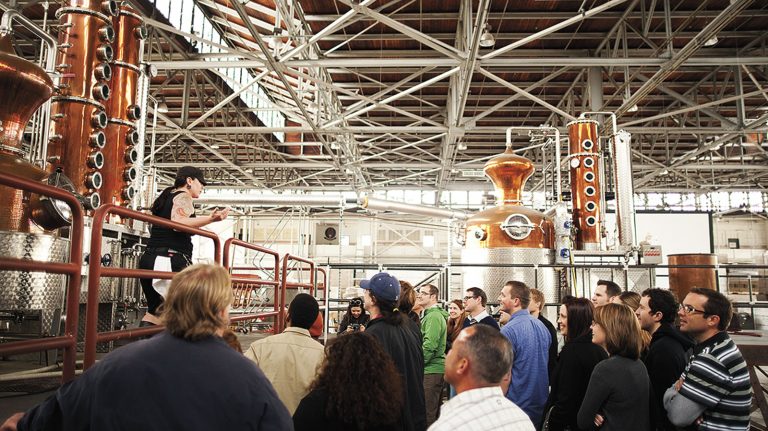 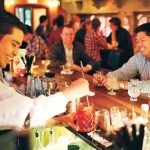 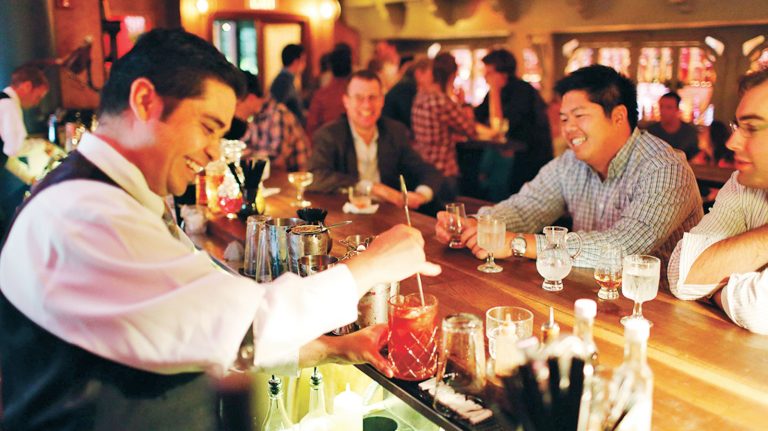