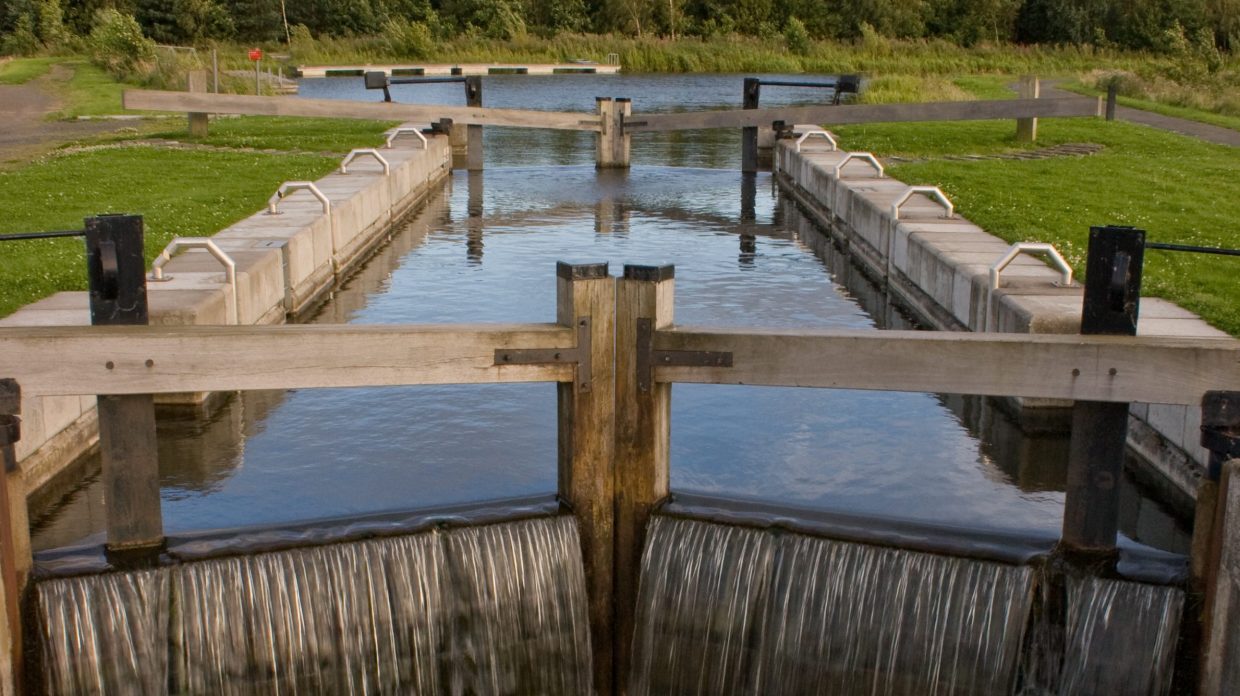 Rosebank Distillery is located along the Forth & Clyde Canal, which runs between Edinburgh and Glasgow. (Photo by ultra164/iStock)

Ian Macleod Distillers announced that it will reopen Rosebank Distillery after acquiring the trademark from Diageo and agreeing to acquire the site from Scottish Canals. The project—which includes a visitor center, along with production and warehousing—will cost £10 million to £12 million ($13.2 million to $15.9 million), and construction is projected to take about two years, with a goal to begin distillation by 2019. In the meantime, Ian Macleod has also acquired all Diageo’s remaining stocks of Rosebank whisky—just “several dozen casks,” according to Ian Macleod’s operations director Gordon Doctor. The company will release that old whisky bit by bit until the modern liquid is mature.

Located on the Forth & Clyde Canal that runs between Edinburgh and Glasgow, Rosebank was founded in 1840 and closed in 1993. Its owners, United Distillers (now Diageo), sold the site to British Waterways (also known as Scottish Canals) in 2002 while retaining the trademark for the Rosebank name. For several years, Diageo offered Rosebank single malt as part of its annual Special Releases, though that hasn’t been the case since Ian Macleod began conversations a couple of years ago to acquire the trademark, according to Doctor. “We’ve got a very good relationship with Diageo,” he says. “Someone else could have bought the site, but they couldn’t have built a Rosebank distillery on it, ’cause I don’t think they would have got access to the trademark. I think we are probably the only company that would have been able to do what we’ve done, which is to buy the site separately and then acquire the trademark and the remaining stock from Diageo.”

The former distillery has sat empty in the years since Rosebank closed. Over the course of several years, thieves stole much of the remaining equipment, including the old stills. “It’s pretty derelict,” Doctor says. “Nothing remaining from the original equipment, [the owners] must have sold it. What was copper was stolen. I think [the thieves stole the stills] over an extended period of time, somehow managed to keep it secret. The claim is that they started cutting from the back of the stills forward, so that whenever anybody look into the still room it looked as if the stills were still there. But the reality was that they were getting eaten away from the back and taken away piece by piece. It is a shame, but we will put back the stills exactly as they were before.” Doctor notes that Ian Macleod will also reinstall worm tub condensers. The building itself will require major reconstruction, with only the frontage and chimney likely to be preserved. Some on-site warehousing remains in good condition and can be used to store casks.

Doctor explains that Ian Macleod’s goal is to faithfully recreate Rosebank’s triple-distilled Lowlands-style single malt. “That would be the intention, to try and reproduce the style of malt coming off the stills,” he says, although doing so will involve research in Diageo’s archives and analysis of existing liquid. “As of yet I have no idea whether there are any old samples of the new make, and they would be pretty old now, anyway. So it’s not as if we’ve got something to benchmark against. But we’ve got [records of how people] described the new make and so on in the past, so we believe if we put the exact same facilities in, then hopefully the spirit coming off the stills will be as close to it as we can get.”

Ian Macleod also owns Glengoyne in the Highlands and Tamdhu in Speyside, and the company will convene a panel of staff from those distilleries to help shape the production of Rosebank’s single malt. The distillery will have a production capacity of up to a million liters. Doctor notes that the company is unlikely to release the whisky at a young age. “We’re looking forward to assessing this—as it matures it may be that the first one will be 10 or 12 year old,” he says. “If [the panelists] think we’ve got good spirit after six, seven years or something, then I wouldn’t rule out bringing out an earlier edition. But it would be call of judgment. It wouldn’t be for any other reason. It wouldn’t be because we’re desperate to get products out there, it would be purely because we think this is worth sharing.”

The news about Rosebank’s revival comes just one day after Diageo announced plans to reopen the Port Ellen and Brora distilleries. While all three whiskies have had a cult following in the years since their closure, Rosebank’s rebirth poses one of the most exciting developments for scotch lovers, as it will add significantly to the ranks of Lowlands distilleries. Next to Campbeltown, the Lowlands has the smallest production of Scotland’s historic whisky-producing regions, though it was once a distilling powerhouse. In the last few years, however, the area has seen significant investment by new whisky companies, including Kingsbarns and Eden Mill in Fife, the recently reopened Bladnoch, and the upcoming new distillery from Douglas Laing in Glasgow. (For a full report on what’s happening in the Lowlands, look for Whisky Advocate’s Winter 2017 issue, hitting newsstands in December.) Soon, Lowlands scotch will be more available than ever—and Rosebank fans will have even more whisky to enjoy. For now, if you want to stay up to date with the project and the Rosebank bottlings that Ian Macleod will be offering, sign up at www.rosebankwhisky.co.uk.