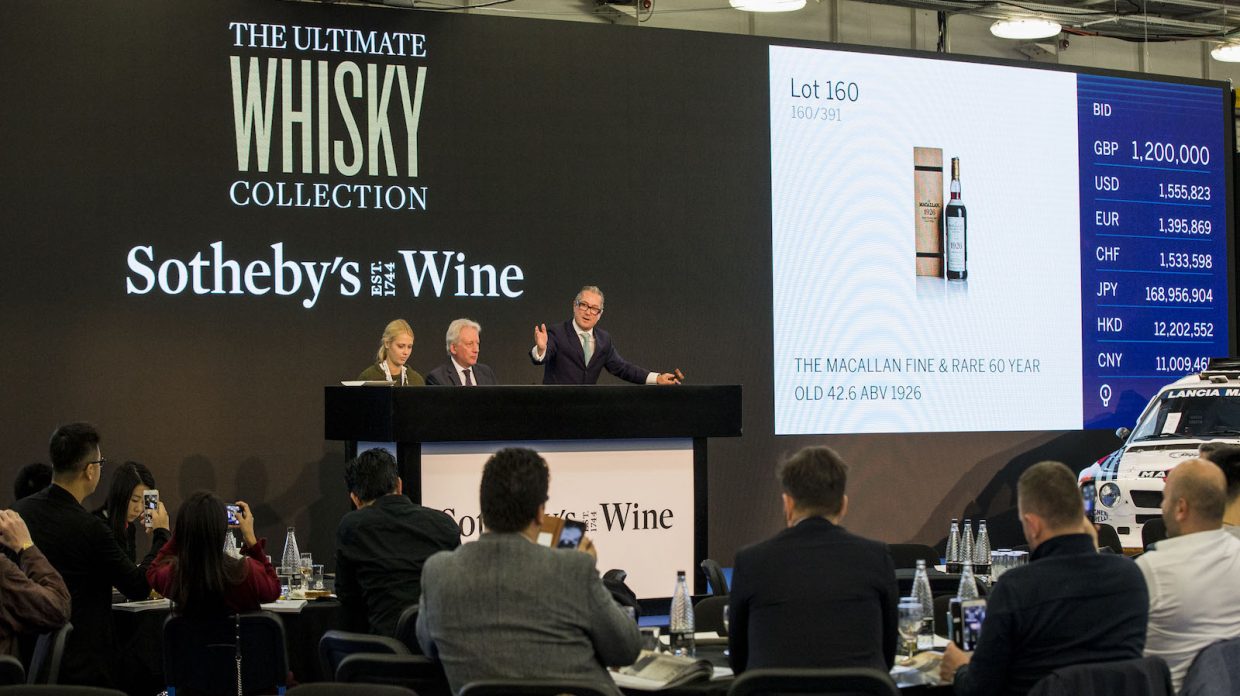 Sotheby’s, London regained the world record for the most expensive bottle of whisky sold at auction on Oct. 24, when the 1926 Macallan Fine & Rare 60 year old sold as part of The Ultimate Whisky Collection. With buyer’s premiums, the bottle fetched £1,452,000 ($1,873,951), making it the fifth time a bottle of 1926 Macallan 60 year old has broken $1 million at auction. The single-owner whisky collection made $10 million in total, with 100% of lots sold—and a substantial number exceeding Sotheby’s high estimates. This auction marked the highest-value wine or spirits sale ever held by Sotheby’s, London, and a remarkable debut for Jonny Fowle, Sotheby’s newly appointed spirits specialist.

“This fantastic result is testament to the quality of the collection,” said Fowle in a statement following the sale. “It was remarkable to see so many iconic bottles break records—homage to the importance of distilleries such as Bowmore, Brora, Springbank and, of course, Macallan. The electricity in the auction room was palpable. There were cheers when the hammer fell on the 1926 Macallan Fine and Rare, in what has to be one of the most exciting moments in the history of whisky sales.”

Sotheby’s is no stranger to record-breaking whiskies; it previously held the record for most expensive bottle of whisky sold at auction in the early months of 2018 with Yamazaki 50 year old, which sold for over $300,000 in Hong Kong. A scant few months later, however, this record was lost to Bonhams, Hong Kong, which sold the Macallan Peter Blake and Valerio Adami bottles for over $1 million each. Sotheby’s new record takes the crown back from Christie’s, London, which held the record for the past 11 months, having sold the 1926 Macallan Fine & Rare 60 year old Michael Dillon bottle for over $1.5 million. (See below for a table of record-breaking 1926 Macallan 60 year old bottles.)

The pre-sale estimates of $420,000–$500,000 for this most recently auctioned 1926 Macallan Fine & Rare 60 year old look rather modest in hindsight. Although it was one of 178 bottles from the Fine & Rare series up for sale, its rarity may have pushed collectors to continue bidding up in the hopes of securing the ultimate bottle for their vertical.

There’s a growing interest in the auction of single casks, with more appearing at auction every year. Of the nine single casks in this sale, the top hammer price of £60,000 ($76,872) was claimed by a first-fill oloroso sherry cask of 1992 Highland Park lying in bond that was gauged to yield 205 bottles, making it $375 per bottle.

Bowmore performed superbly, with strong prices across all iterations of Black Bowmore, but the successful auction of Bottle #1 of 12 of the 1957 Bowmore 54 year old was the most impressive result of all. The distillery offered this exact bottle for £100,000 as a charity lot at Bonhams, Edinburgh on Oct. 10, 2012, but it famously failed to sell in front of the media, whisky collectors, and a film crew hired to record the event. Seven years later, the hammer price of £300,000 ($384,361) at this auction shows that Bowmore was just ahead of its time.