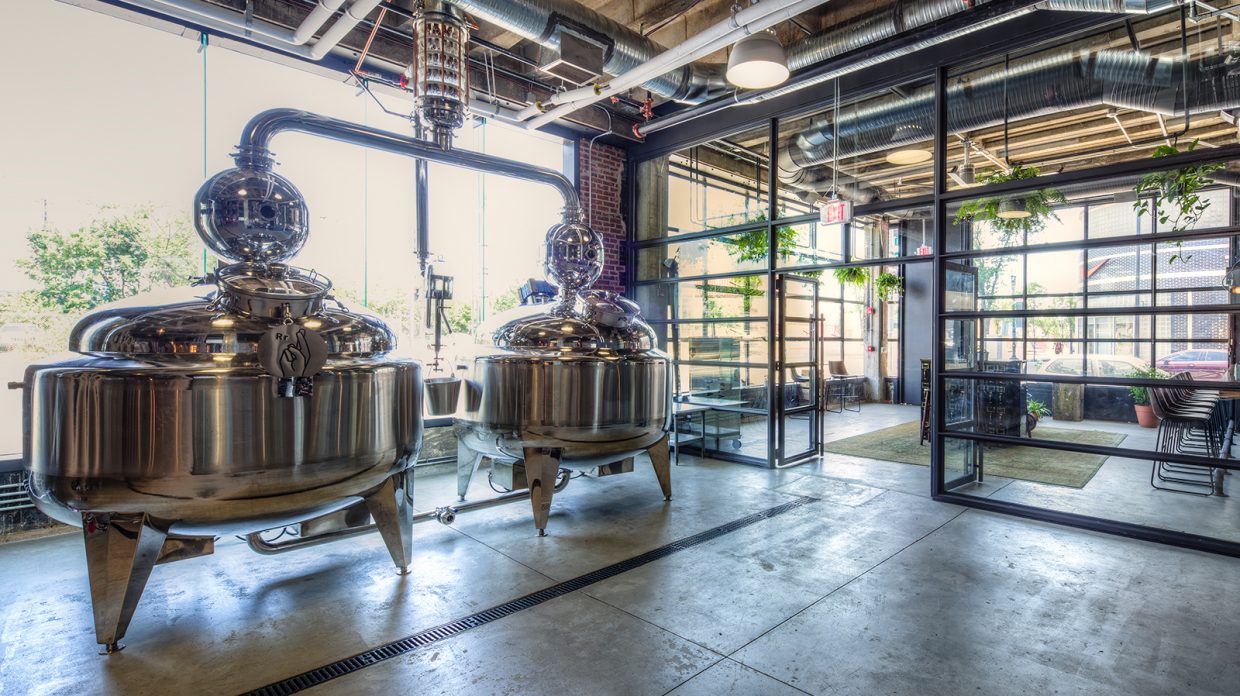 This double-kettle setup at Republic Restoratives uses copper only where it contacts the spirit vapor with extensive bubble plates and caps.

The District of Columbia might be best known for hard-nosed politics and massive protests, but the hard-working men and women of the nation’s capital can at least agree on one thing: the need to unwind with a whiskey. Already home to one of the world’s best whiskey bars, Jack Rose Dining Saloon, D.C. now offers a thriving craft distilling culture, with several making the good stuff right in the heart of the city.

There are half a dozen whiskey-producing distilleries in the nation’s capital, and that’s just in D.C. proper—no need to hit the beltway or figure out the difference between the inner loop and outer loop. Even better, four of those six distilleries are within half a mile of each other in the bustling Ivy City neighborhood, making it a cinch to visit them all in a single day.

Hit the craft whiskey trail in Washington, D.C. at these six distilleries. 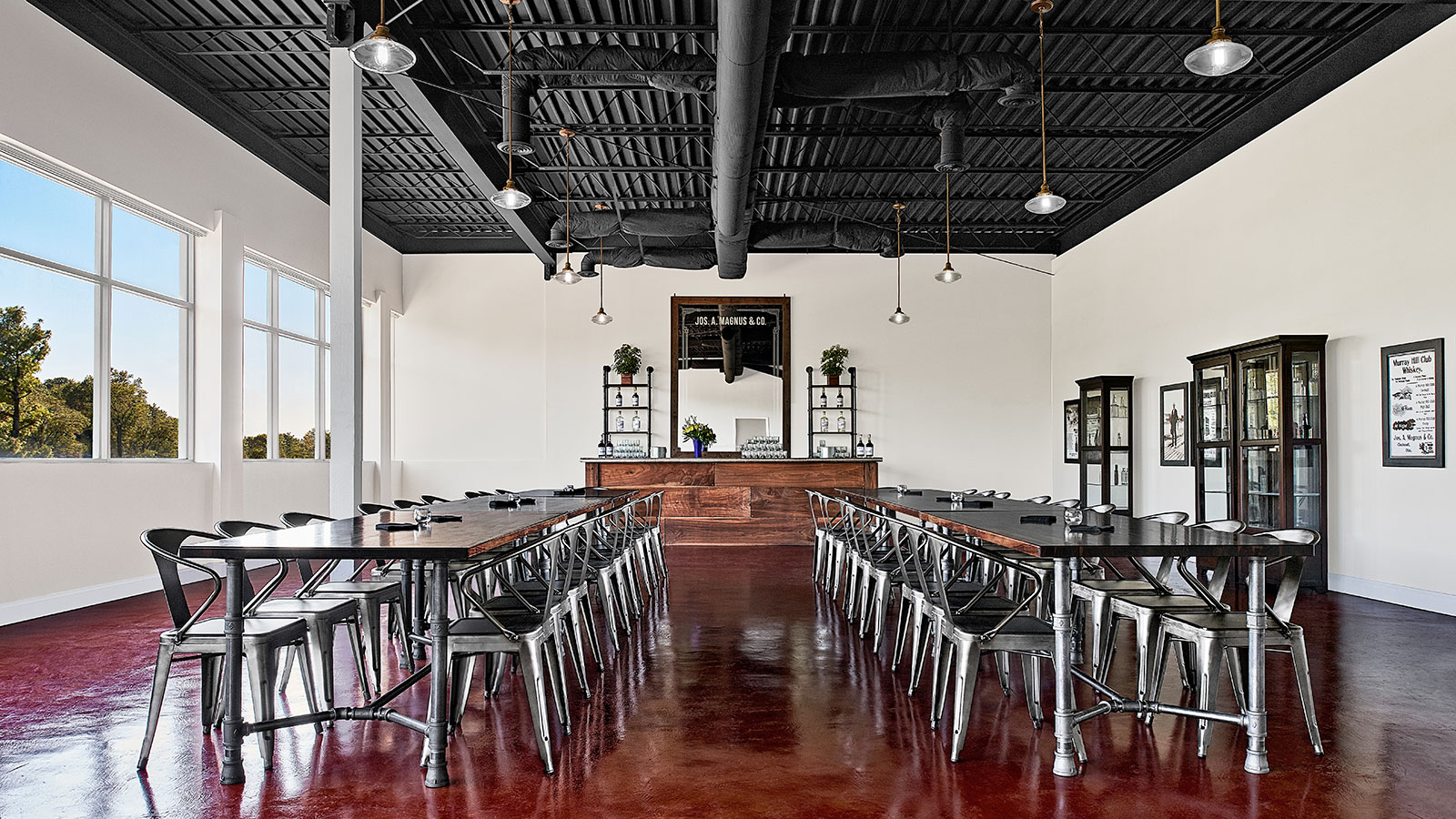 The Magnus Room at Jos. A Magnus & Co. is used for tastings, cocktail classes, and private events.

Jos. A. Magnus & Co. made a quick splash on the national scene with its blended, sourced whiskeys, which launched in 2015. The list includes the highly touted Cigar Blend bourbon, as well as J.A. Magnus Reserve, Joseph Magnus Straight bourbon, and Murray Hill Club Blended bourbon.

But the distillery is also making its own historically accurate spirits, inspired by a bottle of 19th-century bourbon discovered by Joseph Magnus’ great-grandson. Master distiller Brett Thompson has worked with whiskey consultant Nancy Fraley and several other industry heavyweights, such as former Woodford Reserve distiller Dave Scheurich and former chairman of the Kentucky Distillers Association Richard Wolf, to craft spirits, including gin and vodka. For whiskey, Thompson works with three mashbills, making a wheated bourbon, a high-rye bourbon, and a rye whiskey backed by corn and malted barley.

John Uselton and Michael Lowe opened New Columbia Distillers in 2011, becoming the District’s first craft distillery. The place is mostly known by a different name—Green Hat Gin, New Columbia’s core product since its opening. Despite its fame for gin (it makes several different varieties), New Columbia has been patiently putting away whiskey all the while. The distillery’s focus is on rye whiskey, made using 70% rye and 30% malted barley, although it also has a smattering of experimental barrels.

Drinkers who have gotten a glimpse of New Columbia’s whiskey are eagerly awaiting its eventual release.

Free tours and tastings are available on Saturday afternoons from 1 to 4 p.m. 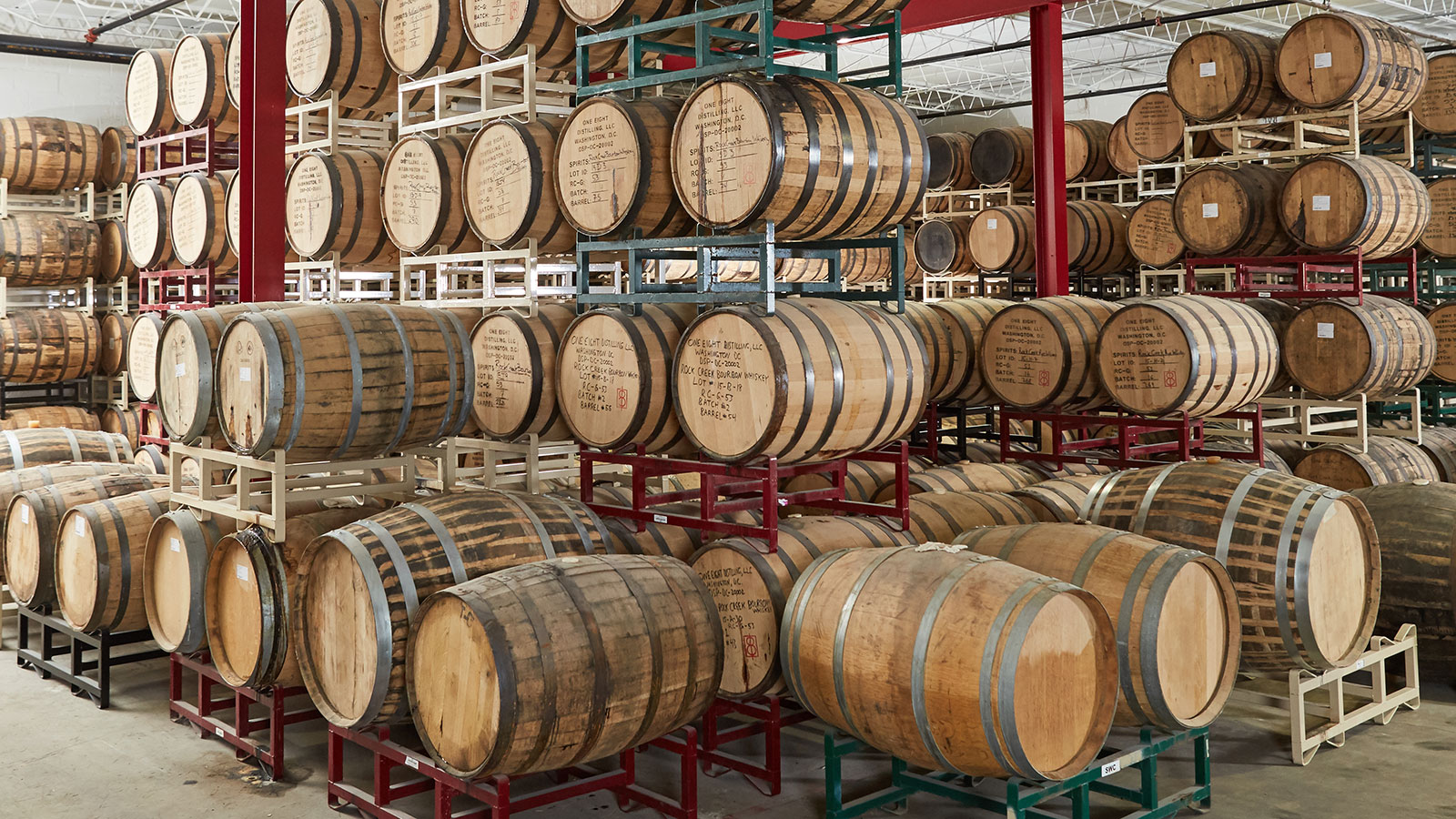 One Eight Distilling, which aptly opened on January 8th, 2015, is the project of co-founders Sandy Wood and Alex Laufer, who also serves as head distiller. They work with a 2,000-liter hybrid pot still—purchased from Chicago’s Koval Distillery, which had outgrown it—and began producing white spirits as they waited for their whiskey to come of age. In the meantime, One Eight also offers the Untitled series, an ongoing and ever-changing lineup showcasing sourced whiskeys which are finished in an array of unusual cask types, like muscat, calvados, and ex-bourbon barrels that previously were used for aging coffee beans.

One Eight’s first house-distilled whiskey, Rock Creek Rye, became available in 2016. Bottled at 47% ABV, Rock Creek was the first rye whiskey distilled and bottled in the District since Prohibition. In September 2017, One Eight released the first ever D.C.-born bourbon, Rock Creek Bourbon Whiskey, which has a mashbill of 58% corn, 7% wheat, 17% rye. 13% malted rye and 5% malted barley. 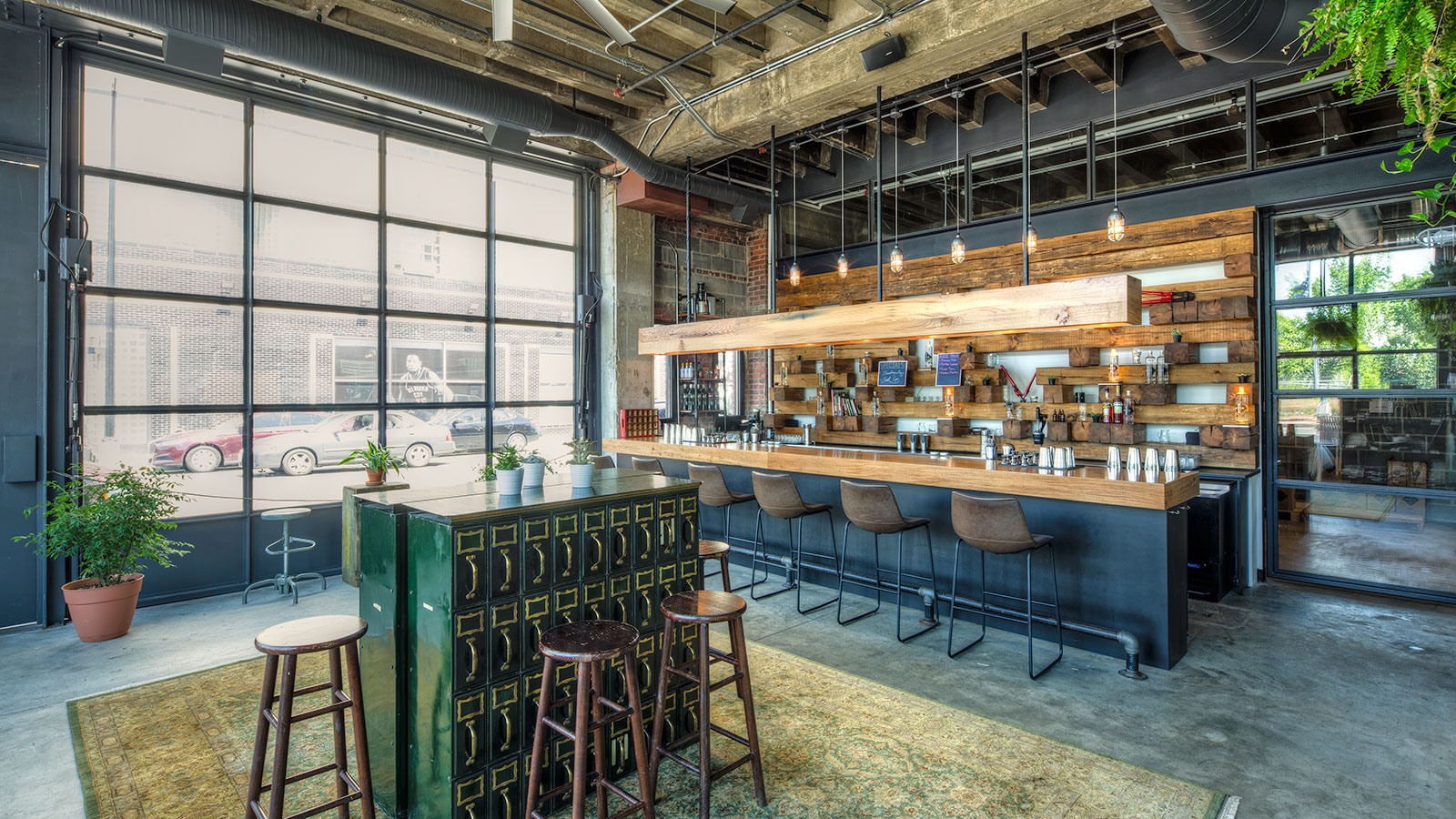 Grab a drink at Republic’s Ivy Room, a popular destination for well-made and reasonably priced cocktails.

Pia Carusone and Rachel Gardner raised nearly $120,000 through crowd-funding website Indiegogo to found Republic Restoratives in 2015. The partners hired distiller and engineer Rusty Figgins, who helped design the operation, including the unique reciprocating still. This double-kettle setup is fast and efficient, and uses copper only where it contacts the spirit vapor with extensive bubble plates and caps.

While many craft distillers migrate to using smaller barrels for maturing their whiskey, Republic Restoratives is going in the other direction—aging bourbon in 132-gallon puncheon casks, much larger than a standard 53-gallon barrel. While waiting for that bourbon to mature, Republic is offering Civic Vodka and a lineup of sourced whiskeys, including Rodham Rye—a blend of 3 year old and 1 year old whiskey from Tennessee, cut with water from a farm in New York, and named for the former First Lady and Secretary of State—and Borough Bourbon, which is made in Bardstown, Kentucky, and finished in Sauvignon Blanc barriques.

The distillery’s attached bar, Ivy Room, is a popular destination for well-made and reasonably priced cocktails.

District Distilling boasts a thriving bar, a full-service restaurant, and a beautiful, shiny distillery, all in a multi-story rowhouse smack dab on the corner of 14th & U Streets. Head distiller Matthew Strickland used to head up research and development at Tennessee’s Corsair Distillery, known for its innovative techniques and unusual ingredients. He puts a wildly inventive streak and endless experimental curiosity to good use on both a 24-inch diameter double column still and a 300-gallon CARL pot still, making rye whiskeys, smoked whiskeys, rum, brandy, gin, eaux de vie, and agave spirits, to name a few.

The distillery’s currently available whiskeys include Backroom Bourbon, Backroom Rye, and C&O Tradesman Whiskey; all are sourced from multiple distilleries and blended by District. On-site distilling began in August 2016, and several types of wheated bourbon are currently resting in a mix of 53- and 25-gallon barrels.

Distillery director Jon Arroyo and distillery manager Bob VanLancker produce vodka and amaro on a 50-gallon still, alongside a smaller alembic-shaped system they use to re-distill the amaro. They plan to continue working with Copper Fox for their whiskeys.

Beyond Whiskey and The District

If you’re ready to expand beyond whiskey, consider visiting rum distillery Cotton & Reed (located adjacent to Union Market), or pick up an amaro or a liqueur to deploy in an all-D.C. cocktail at local producer Don Ciccio & Figli (near Takoma).

The District’s whiskey scene continues to blossom, with bars, restaurants, and distilleries sprouting up left and right. There’s always a good reason to come back—and a good drink waiting for you.