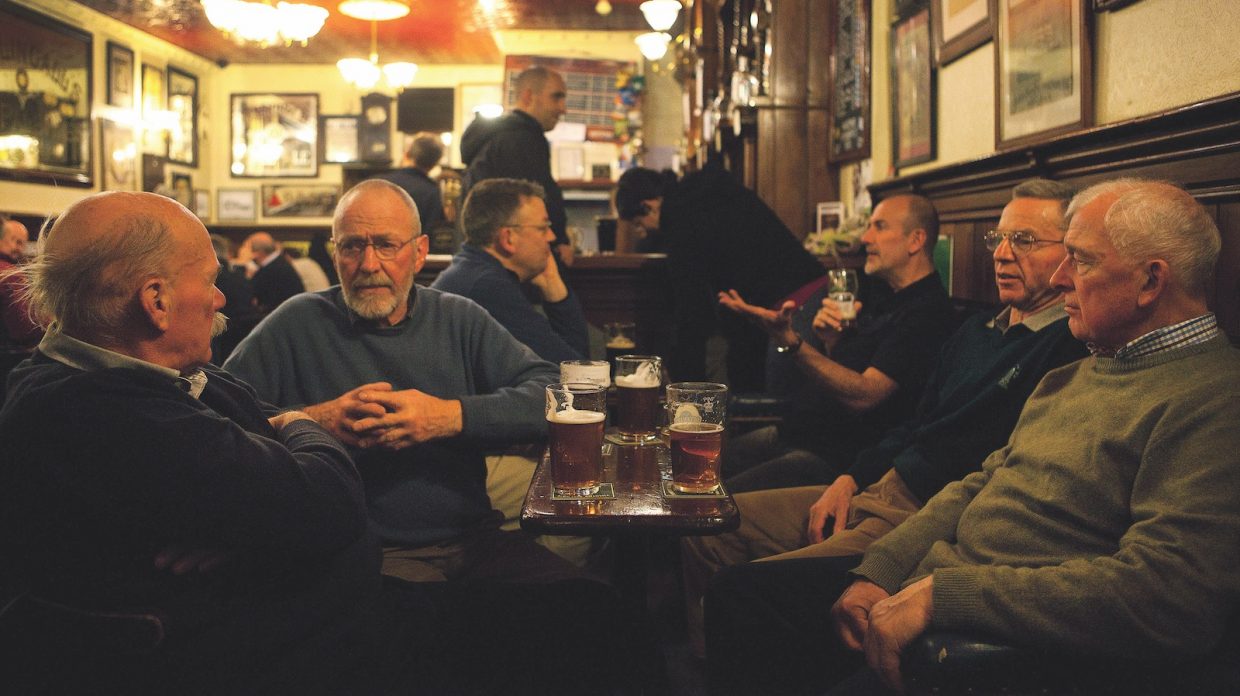 Edinburgh is home to a vibrant bar scene, including the storied Bow Bar, known for its excellent beer selections and ever-changing whisky list. (Photo by ilpo musto/Alamy)

For the whisky lover, traveling to Scotland can seem daunting—there’s so much ground to cover in scotch’s homeland. Fortunately, the capital, Edinburgh, offers visitors a comprehensive whisky experience in the convenience of an urban setting. With its excellent access to over a dozen Highland and Lowland distilleries, countless pubs and bars, revitalized urban distilling, world-class cocktail culture, and immersive whisky education, Edinburgh serves as the gateway to Scotch whisky.

Central Edinburgh is divided into two sections: the Old Town, whose main artery is the Royal Mile, stretching from Edinburgh Castle down to Holyrood Palace, and the New Town, the neatly gridded area to the north of Princes Street Gardens. Buses and trams provide excellent transportation throughout most of the city, but within the Old Town, which has a lot of stairs and narrow alleys, getting around on foot is most efficient—just be prepared to huff and puff a bit. Taxis and Uber operate widely throughout the city.

Edinburgh is a year-round whisky city, but many people visit during the Fringe Festival in August, when the two-day Whisky Fringe takes over the lofty Mansfield Traquair. The city hosts several other large-scale whisky events, including the theatrical Whisky Stramash, held at the creepy-cool Surgeons’ Hall Museum in May, and the Edinburgh Whisky Festival at the Assembly Rooms in June. Edinburgh can serve as a base for whisky festivals that are further afield, like the Fife Whisky Festival (March), Stirling Whisky Festival (May), and the Whisky Social in Falkirk (August)—all easily accessible by train.

The UK regulates pour sizes for spirits, either 25 ml or 35 ml (or multiples of those amounts). Check which volume is being offered. Most pubs and bars close at midnight or even earlier during the week, although nightclubs are open later.

Bramble
One of Edinburgh’s most original cocktail bars, featuring inventive and imaginative drinks across all spirits. Tall folks should watch their heads in the low-ceilinged space.

Kaleidoscope Whisky Bar & Shop
This New Town venue belongs to the Scotch Malt Whisky Society but is open to the public, with more than 200 whiskies to try.

Panda & Sons
A speakeasy-style bar masquerading as a barbershop with an ursine backstory. Book in advance or be prepared to queue. 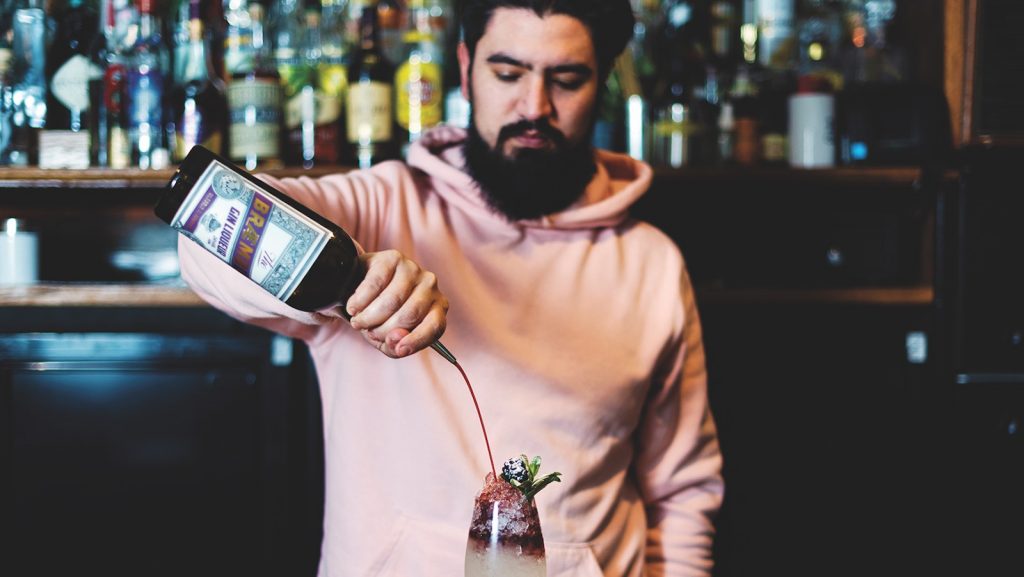 Bramble, one of Edinburgh’s most original cocktail bars, features inventive and imaginative drinks across all spirits.

Scotch
This whisky-only venue in the stately Balmoral Hotel boasts more than 550 bottles, which the expert staff use to create custom “whisky journeys.” Despite the luxe feel of the space, the menu has plenty of affordable options.

Tonic
Movie buffs will enjoy the drinks named for famous film lines, such as Dead or Alive You’re Coming With Me, made with Bulleit. The menu is divided by base spirit, making it easy to home in on a choice.

Usquabae
This underground pub serves excellent food and offers some of the best rare whiskies in the city, as well as well-priced standard pours and a strong cocktail menu. Aim for one of the snug booths if you plan to settle in for a long dramming session.

Balmoral Hotel
With its Victorian architecture and imposing clock (set three minutes fast to make sure the locals make their trains on time), The Balmoral is Edinburgh’s old-school hotel. J.K. Rowling finished writing “Harry Potter and the Deathly Hallows” here (you can now stay in the J.K. Rowling suite). “Balmoral” is Scots Gaelic for “stately residence,” and guest rooms are sumptuously appointed, many with spectacular views. The Balmoral offers a whisky turndown service for VIP guests, featuring Glenmorangie.

The Glasshouse Hotel
A former church, the boutique Glasshouse Hotel boasts floor-to-ceiling windows and terrace rooms with stunning views of Calton Hill. Suites are named for distilleries and Scotland’s whisky regions, like Macallan and Islay. The hotel’s bar, the Snug, has a large whisky selection, cocktails, and cigar pairings. The Glasshouse also offers a two-day Elite Whisky Experience package that includes a custom tour at your distillery of choice.

If you’re picking up a bottle to take back to the U.S., ask the shopkeeper to print a VAT 407 form, which allows you to get a refund on the tax. Follow the instructions on the form and deposit it, along with your receipt, into the postbox by Gate 5 at Edinburgh Airport before departing.

Royal Mile Whiskies
Easy to find (it’s in the name), this petite shop has a wide range of scotch and other whiskies, including bourbons you might have a hard time locating stateside. Ask the staff to help you find a bottle that isn’t available back home—the shop-only exclusives are an excellent choice.

Cadenhead’s
This independent bottler is owned by the same family behind Springbank, making its shop a destination for Campbeltown lovers. But there are plenty of whiskies from throughout Scotland, available as cask-strength, single-cask bottlings. The blackboard list of offerings might trigger panic—what to buy?—until you realize that nearly everything is available to try before purchase. 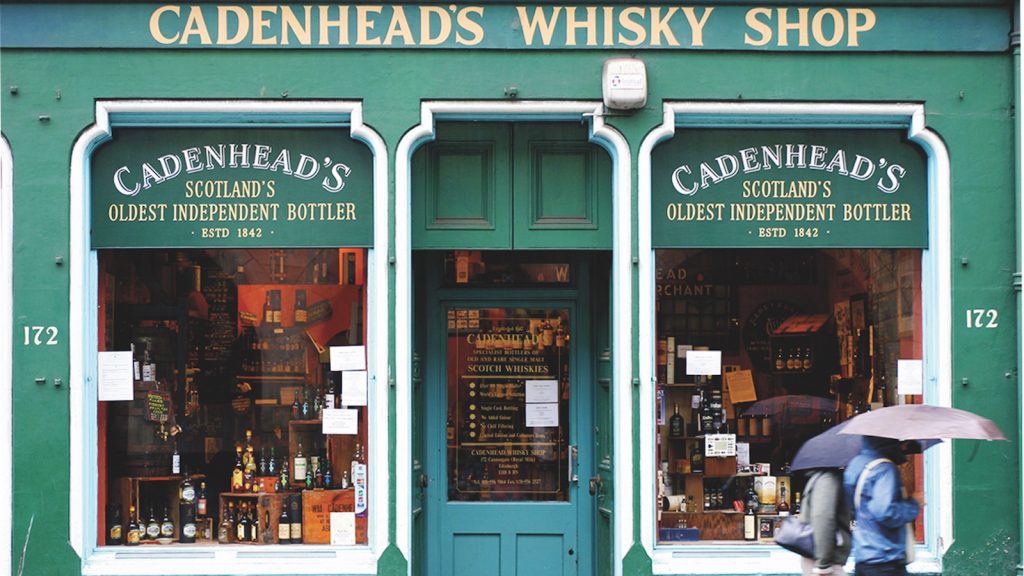 The Whisky Shop
Tucked into the cute shops and restaurants lining Victoria Street/West Bow, this store has a vast selection and ships to the U.S.; pick up a bottle and then go next door to I.J. Mellis for some locally made cheese to pair with it. There’s a second location of The Whisky Shop in Waverley Mall as well, convenient to the train station.

The best exclusive whiskies are found in specialist shops, which typically offer several single-cask bottlings. In addition, look for single malts that aren’t available in the U.S., such as Diageo’s Flora & Fauna series that showcases some of its lesser-known distilleries, including Linkwood and Auchroisk. John Crabbie & Co. currently bottles several single malts as well; check out the 12 year old.

Edinburgh is within a two-hour drive of a wealth of single malt distilleries, making them an easy day trip. All, except Aberfeldy and Annandale, are accessible within three hours by bus or train (or a combination of the two).

For those who want to stay within the city, Holyrood Distillery began hosting tours in July 2019. Port of Leith Distillery and Crabbie’s Bonnington Distillery will open their doors to visitors in the next couple of years.

Annandale
A historic distillery located in the far southern Borders and revived in 2014. The former maltings is now a café, perfect for enjoying lunch and a dram of the distillery’s Man O’Words (unpeated) and Man O’Sword (peated) single malts.

The Borders Distillery
Among the newer distilleries, it is making whisky and gin in a converted Victorian-era electrical station. The company also offers blended whiskies.

Clydeside
Glasgow’s newest distillery occupies a historic building on the docks and sells a variety of single malts, as well as its new-make. Whisky can be paired with food in the on-site café.

Eden Mill
A brewery and distillery located in the heart of St. Andrews; it also makes gin. Production is kept intentionally small, but you can taste the single malt during the whisky and beer tour.

Kingsbarns
The Wemyss family opened this distillery in 2014; it’s well-located for golfers exploring the courses of Fife. A range of tours includes tastings of Wemyss Malts’ independent bottlings and blended malts.

Glenkinchie
A quick trip from Edinburgh, offering free shuttle service twice daily from the city center. The range of tours includes one that explores the wildlife around the distillery.

Lindores Abbey
Touted as the “spiritual home” of Scotch, this historic abbey made whisky hundreds of years ago—and now does so again. While the single malt is aging, try the botanical aqua vitae spirit.

Aberfeldy
A can’t-miss stop for fans of Dewar’s, where you can create your own custom blend and enjoy whisky straight from the cask.

Blair Athol
The home of Bell’s and one of Scotland’s most picturesque distilleries. Don’t miss the distillery-only bottling.

Deanston
As seen in the movie “The Angels’ Share,” this former cotton mill makes excellent single malt. Try the variety of cask-finished, distillery-only bottlings after your tour and pick one to take home.

Edradour
One of the smallest distilleries in Scotland and just up the road from Blair Athol. Edradour is owned by independent bottler Signatory, so you can taste a great selection of whiskies from all over Scotland. 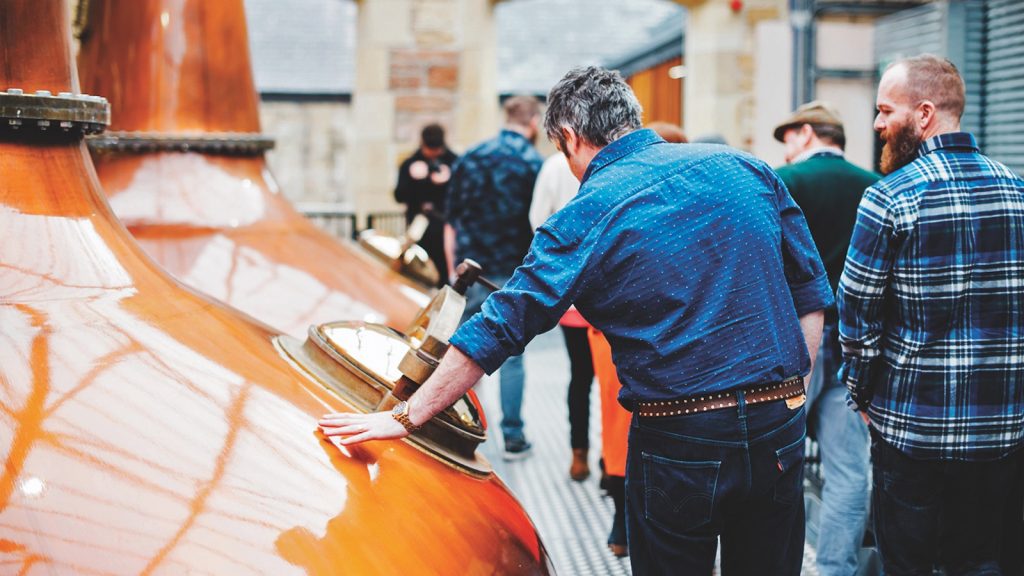 Just a short jaunt from Edinburgh, the Borders Distillery makes whisky and gin in a converted Victorian-era electrical station.

Fettercairn
North of Dundee, this distillery’s whisky has most often been used in blends, but visitors can taste up to three different expressions of the single malt during a tour.

Glengoyne
A favorite stop for hikers on the West Highland Way, Glengoyne technically straddles the Highlands-Lowlands divide, but is considered a Highland distillery. Grab a bottle of the highly coveted Teapot Dram in the gift shop.

Glenturret
This distillery makes the heart malt for The Famous Grouse, which is the focus of its tour experience.

Strathearn
Opened in 2013, this tiny distillery occasionally has whisky available for sale, but mainly offers gin and rum.

Tullibardine
Conveniently located just off the A9, this distillery makes a floral single malt and offers a range of tour options, including a chocolate pairing.

Taste of Edinburgh: 6 Whiskies to Try

You can easily reach over a dozen distilleries from Edinburgh within a two-hour drive, making it an ideal jumping-off point for exploring Highlands and Lowlands whiskies, from longstanding names to up-and-comers. While many of the newest distilleries don’t yet sell their whiskies in the U.S., there’s still plenty to enjoy from the more established producers.

The Famous Grouse—89 points, $30
With its heart malt made at Glenturret Distillery, this classic blended scotch has everything to like: toffee, spice, citrus, and fruit.

Glenkinchie 12 year old—87 points, $60
Until recently, this was the closest distillery to Edinburgh, and its classic expression offers soft notes of flowers and vanilla. 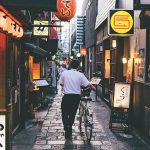 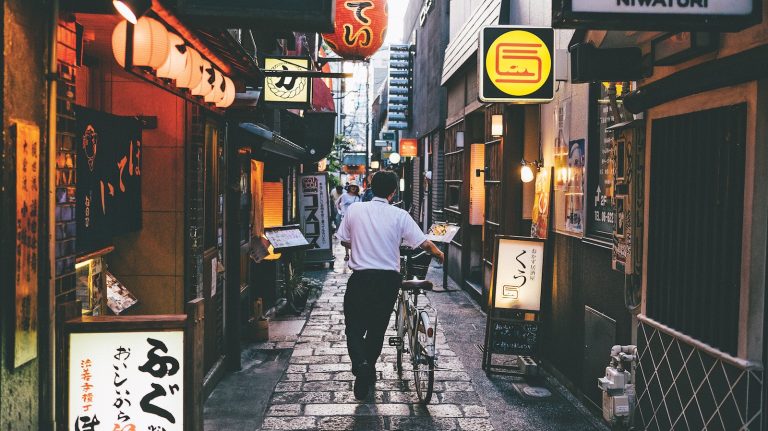 From its distilleries and bars to its robust cocktail culture, the birthplace of Japanese whisky offers unique angles for appreciation. 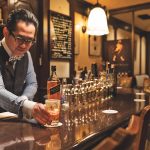 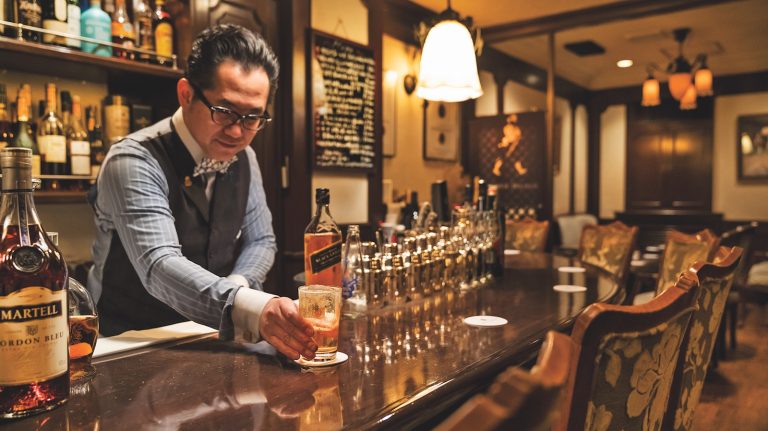 Osaka presents a plethora of options for the traveling whiskey lover. This guide will help you find the best. 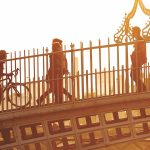 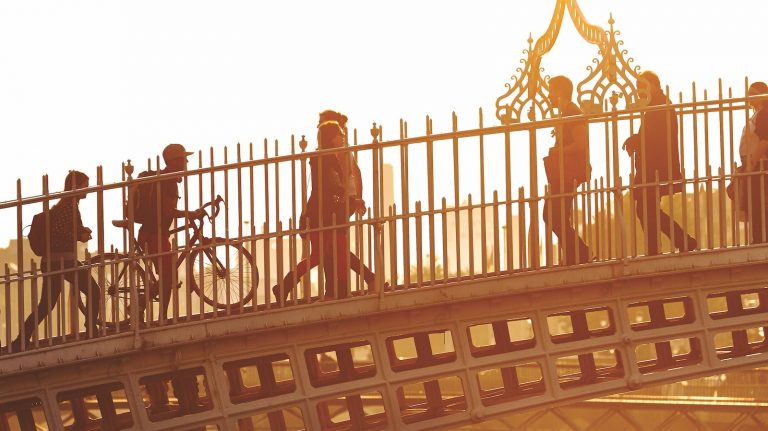