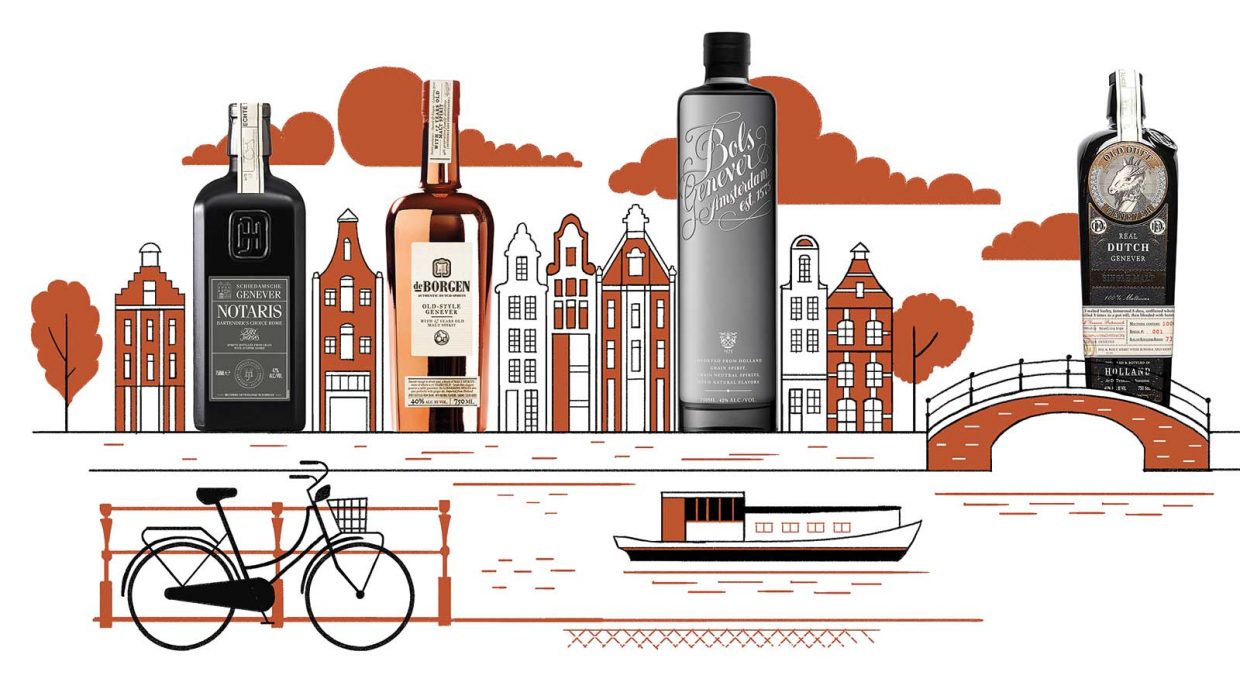 Both Dutch genever and England’s London Dry gin are informed by juniper—from which their names derive—but that’s where their similarities end. Nearly all genever combines neutral grain spirit and “malt wine”—a heavier flavoring spirit that may be distilled from a mash of malted barley and any other grains, although corn, wheat, and rye are common. It’s the percentage of this malt wine, and to what degree it’s aged in oak, that largely determines whether a genever will veer toward lighter gin or evoke the fuller flavors found in whisky. Genevers with generous malt wine and barrel age may be far better suited to whisky lovers than Gin and Tonic devotees.

Genever is a point of pride in the Netherlands, where it predates the gin rage in Britain. Piet van Leijenhorst, master distiller of Lucas Bols, points out that the 17th century British soldiers returned to England with a taste for genever, so-called “Dutch courage,” following the Eighty Years War. According to Philip Duff, owner of Old Duff Genever, the English attempted to replicate genever—albeit poorly. “They tried to copy a genever, but they didn’t succeed. They used too much juniper berry. They ramped up the amount of botanicals 20 or 30 times to cover up the fact that they didn’t know how to distill grain properly.”

Genever Crash Course: The Essential Facts You Need to Know

Genever has many names…
The national drink of the Netherlands is now most commonly spelled genever, but variations include geneva, jeneva, jenever, genièvre, and even hollands. The accepted English pronunciation is juh-NEE-vuhr, but the Dutch say ye-NAY-ver.

And may or may not be Dutch.
In 2008, the European Union declared genever a Protected Product of Origin, allowing it to be made in the Netherlands, Belgium, and certain areas of Germany and France. Much of what is bottled in the Netherlands is distilled in Belgium.

More genever is coming!
To increase awareness, the European Union and a genever association—including the producers of Bobby’s, Bols, de Borgen, Notaris, Rutte, and Smeets—called SpiritsNL are bringing genever education to the U.S.

Well, actually, it’s back.
Genever was once hugely popular on this continent, but two world wars and Prohibition whipsawed the drink’s fortunes. Myriam Hendrickx, master distiller of Rutte genever, surmises that a 19th-century Martini forerunner, the Martinez, was developed with genever.

So, start mixing it…
Luke DeYoung, bar manager of Chicago’s Scofflaw, says using authentic genever in classic cocktails is “like seeing a whole different side of cocktails.” Substituting genever for gin results in grain-driven cocktails with fewer botanical flavors and a textured mouthfeel. DeYoung suggests trying genever in the Old-Fashioned, Gin Daisy, and Bees Knees.

Or sip it like whisky.
The Dutch take genever as a kopstootje (kop-stow-che). Meaning “little head butt,” it is essentially a Boilermaker (a shot and a beer) with a ritual. The bartender pours genever to the rim of a tulip glass. The customer then bends over the bar to slurp up enough liquid so the glass can be picked up without spilling. Then comes a toast and alternating sips of genever and beer.

One number you need to know:
The percentage of malt wine correlates closely with richness and flavor. Oude (old style) has at least 15% and up to 100% malt wine. Jonge (young style) was developed later; it includes more high-proof neutral spirits and has less than 15% malt wine (most contain only 1 to 3%.) The rare korenwijn style must have at least 51% malt wine.

A Journey Through Genever: 6 Must-Try Bottles

Bobby’s Schiedam—38%, $35
This new-style genever has a slight malt content of 4%. Juniper, ginger, and cubeb pepper all come through, but sweet lemongrass dominates.

Bols Barrel Aged—42%, $45
This expression revives an 1820 recipe. Malt wine (made from rye, corn, and wheat) makes up half the spirit. Aged in French Limousin oak, it tastes of sweet spice, fruit, and bread dough.

de Borgen Old-Style—40%, $50
Meant to honor traditions of the 17th and 18th centuries, its malt wine content is 21% and the juniper is not shy. Contains sweet notes such as caramel popcorn.

Rutte Old Simon—35%, $44
This oude genever, with a malt wine content of 40%, calls out its list of twelve botanicals, with juniper, walnuts, licorice, and fresh fruit apparent on the palate.