The whiskey scene in Dallas is like Texas itself—unpretentious, down-to-earth, and bold. Every neighborhood has a different feel that seeps into its bars. In Deep Ellum, you’ll find no-nonsense places that will likely have live music playing outside. In Uptown, expect a neighborhood bar feel with a mix of old Dallas money and fresh-out-of-college kids bonding over an Old Fashioned. From ultra-rare bottles to barbecue dinners cooked with whisky, each of these spots in Dallas offers a unique, whisky-filled experience.

2714 Elm St. armouryde.com Tucked away in Dallas’s vibrant Deep Ellum neighborhood, Armoury DE is detectable only by the neon “A” above its doors. Its understated, approachable atmosphere is complemented by delicious Hungarian food and a diverse collection of 100-plus whiskies, including rare finds such as Parker’s Heritage Collection 8 year old rye ($40/1.5 oz.), Midleton Very Rare 2017 ($41/1.5 oz.), and Old Fitzgerald 13 year old Bottled in Bond ($45/1.5 oz.). “The type of drinker who comes in is looking for specific stuff, a little bit rarer,” says general manager Kelsey Hanshew. “So, we hit those different names they know, but [suggest] something that’s a little more special.” In addition to its whiskies, Armoury DE has an impressive cocktail program featuring its signature Bonnie and Clyde Smoked Old Fashioned made with bourbon, rye, chamomile demerara, smoked cedar, bitters, and a Laphroaig rinse. 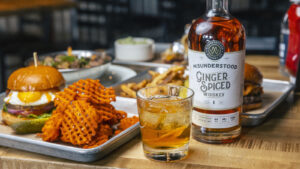 5855 Maple Ave. themaplelanding.com Whiskey and barbecue are a quintessential Texas combo, and Maple Landing provides the best of both worlds. Not only does it carry rare whiskeys such as the St. Patrick’s Day edition of Kentucky Owl ($66/1.5 oz.) and Elijah Craig 18 year old ($32/1.5 oz.), but it also incorporates them into their food, including its smoked barbecue sauce. “If we have a whisky dinner, we’ll utilize our whiskies and put them into the flavors to complement whatever whisky we choose,” says general manager Joe Elkington. Recently, the venue hosted a Blanton’s and Weller dinner, and another one in the planning stages will feature Japanese whisky paired with foods inspired by it. 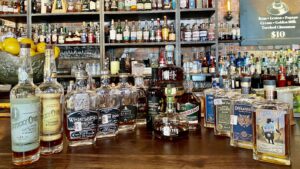 2900 McKinney Ave. tspdallas.com Perhaps one of Texas’s most well-renowned whisky bars, The Standard Pour lives up to its reputation. The bar’s ever-changing collection of over 100 whiskies includes several bottles that are nearly impossible to find. Of course, they carry highly revered labels such as Pappy Van Winkle 23 year old ($300/1.5 oz.), but their true gems are labels like O.F.C. 1985 ($400/1.5 oz.) and Hibiki 21 year old ($185/1.5 oz.). Thanks to general manager Sean Taylor, The Standard Pour is first in line for many allocated whiskies. “There are no two ways about it, we have the best selection of bourbons and small-batch whiskeys in all of Dallas-Fort Worth,” owner Eddie Campbell says.

2800 Canton St. whiskeyhatchet.com Throwing axes and drinking whiskey are probably two of the best ways to let off steam, and Whiskey Hatchet provides an exciting environment for both. Besides the axe-throwing aspect, the bar sets itself apart from other spots by carrying newer, lesser-known whiskies. “We aren't looking for the crazy things that everybody knows by name,” general manager Jeff Picken says. “We’re trying to introduce a new brand or product to people.” Along with classics such as Woodford Reserve Master’s Collection Very Fine Rare ($25/2 oz.), Whiskey Hatchet’s list also includes labels like Elijah Craig Toasted Barrel ($17/2 oz.) and Glenfiddich 30 year old ($100/2 oz.). The bar also hosts scotch tastings; chocolate, cheese, and whisky pairings; and even a bacon and bourbon tasting. 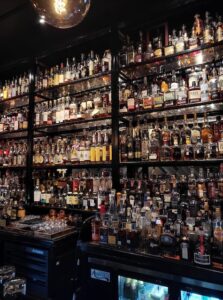 835 Exposition Ave. whiskeysdallas.com Despite boasting a collection of about 600 bottles, the staff at Whiskeys is particular about what it chooses to serve at the bar. “We keep a folder with all the feedback of all the bourbons that we have in here,” owner Sean Smith says. “So, we handpick everything. We don’t just get it because it’s out. We go sample, and if it doesn’t meet our criteria, it doesn’t get on that back wall.” Along with rare whiskeys like William Larue Weller ($92/1.5 oz.), Sazerac 18 ($92/1.5 oz.), and Willett Purple Top ($65/1.5 oz.), they also offer private barrel picks, currently Sagamore Rye ($9/1.5 oz.). To help navigate the impressive number of options Whiskeys has to offer, every member of the all-female bar staff is Stave and Thief bourbon-certified, so they can point both novices and aficionados to something they’ll love.