9 Whisky Cocktails That Are Perfect for Fall

As we pack away our swimsuits and sandals and pull out the sweaters and boots, it's also time to shelve the light, sessionable cocktails and put deeper flavors front and center. Not only does whisky warm you from inside out, but there is also a whisky to complement pretty much every fall flavor, from apples to squash, resulting in a bounty of delicious cocktails.

Whether you're gathered around a bonfire, navigating a corn maze, or raking the leaves (yet again), keep these recipes in rotation all fall long.

Try These Whisky Cocktails Made With Autumn Ingredients

“There's nothing like sitting around a backyard and savoring the final moments of summer as we transition to the cooler evenings of fall,” says Jacyara de Oliveira, bar manager at Beatnik in Chicago. She created The Pandorica Opens to celebrate the joys of cooler weather. “The combination of smoke and apples in the base spirits here reminds me of campfires and apple picking.” Add the warming spices from Yellow Chartreuse and walnut liqueur, plus some nutty sherry to dry it all out, and this cocktail tastes like fall in a glass.

Get the Recipe: The Pandorica Opens

“I associate rye with the coming of chilly weather and what is more Halloween than pumpkin?” says Brian Cupitt, beverage manager of Philadelphia's Alma de Cuba. His Batista's Exile is spicy, sweet, savory, and tart. "The rye contributes baking spices and heat, the calabaza shrub provides tartness and fruity notes, and the vermouth balances it all and adds a little sweet,” he says.

Get the Recipe: Batista's Exile

Corn isn't just for eating off the cob or running mazes—try it in this cocktail, created by Becky McFalls-Schwartz, beverage director at Bar Moga in New York City. “The corn flavor in this recipe really comes through, adding a sweet vegetal, pasture-like note that makes me think of the close of summer and transition into fall. The chipotle adds a faint smokiness and depth without imparting too much heat, and the sherry and Cherry Heering round it out with the faintest touch of acidity,” says McFalls-Schwartz, who collaborated on this recipe with the chefs at Table X, Salt Lake City.

Get the Recipe: Corn Silk Flip

“Fall is my favorite time of the year for live music. The Empire Line cocktail is named for a song from the upcoming fall release from The National. The drink emulates the song with its depth and richness,” says Steva Casey, bartender at The Atomic Lounge in Birmingham, AL. “Making a spiced syrup with brown sugar adds depth to your drink and is a wonderful enhancement for scotch.”

Get the Recipe: Empire Line

Saged Sherry: Get wild with smoky whisky, walnuts, and hay

“This smooth cocktail starts with the high notes from the mandarin and the sweetness from the walnut and vermouth,” says mixologist and beverage director Cristopher Wagner of New York City's PS Kitchen. He created the Saged Sherry with bartender Tracy Fabricante. “There's a bit of a viscous mouth feel from the pear puree, and you finish with a bold, smooth note from the whisky. The aftertaste is the black walnut and some dryness from the hay.” For a campfire experience, smoke the glass first.

Get the Recipe: Saged Sherry 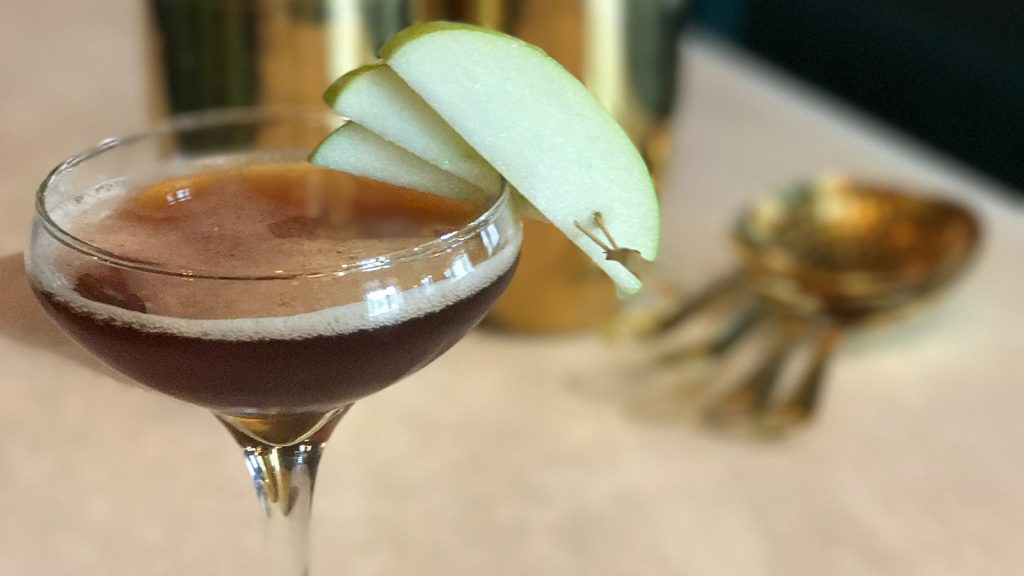 An Apple A Day: Introduce apple pie flavors to bourbon

An Apple a Day keeps the doctor away...or in this case keeps you warm and cozy. “This cocktail evokes memories of grandma's baked apple pie, the crisp autumn air, burning leaves, and hayrides through the orchard,” says Allen Lancaster, master cocktail craftsman at The Bar at The Spectator in Charleston, SC. “Bright notes of apple and acidity from the lemon up front are complemented with the fall spices on the back palate at the finish.”

Get the Recipe: An Apple A Day

Get the Recipe: Charming Man

Falling in Love: Warm up bourbon with chai spices

The Falling in Love cocktail combines spices with bourbon and fruit juices for a drink that tastes and looks like fall. “You get warming spices and robust flavors that help keep you warm, but also make you feel at home,” says creator Cody Goldstein, founder of Muddling Memories and beverage consultant for Farmhouse Hospitality. Plus the drink replicates fall turning from summer (the light bottom) into more red and orange colors (the wine float).

Get the Recipe: Falling in Love

The Late Harvest: Tart up rye with cranberry

The Late Harvest, created by bartender Mario Salas of Nashville's L.A. Jackson, is stirred and serious...but not too serious. “This drink makes you feel like you're huddled up near a fire at a cabin in the Blue Ridge Mountains,” Salas says. “You get the undertone spice notes from the rye to accentuate the viscous, tart cranberry, as well as high notes of lingering orange and clove from the allspice. The aroma of orange oils brings it all together.”

Get the Recipe: The Late Harvest