Steve McCarthy began as a modest distiller in Portland, Oregon, founding Clear Creek Distillery in 1985 to make European-inspired eaux de vie. But whiskey had been on his mind since a 1980 trip to Ireland, where he was rain-bound in a cabin amply stocked with scotch. He later took a trip to Scotland, and returned to make his own whiskey, aged in sherry barrels and finished in Oregon oak casks. McCarthy released this creation in 1996, calling it Oregon Single Malt.

Over the years, other American distillers began making whiskey from malted barley, embracing the term “single malt,” with Scotland as the inspiration. Among the leaders has been Virginia Distillery Co., founded in 2011 by George Moore. George passed away in 2013, but today his son Gareth carries on his vision of taking, as he describes it, “traditions from the Old World and making them better.” Virginia Distillery Co.’s early releases were from distillate made in Scotland and aged at the distillery in the foothills of Appalachian Virginia. Today its own whiskeys have come of age, with its Courage & Conviction series scoring high ratings in the Whisky Advocate Buying Guide.

But the roots of America’s single malt phenomenon perhaps lie more in craft beer, where brewers fermenting malted barley took the step of turning that beer into whiskey. “You hear a lot from distillers who were scotch-inspired, but in sheer number, the proliferation of smaller American single malts is coming out of beer,” says Christian Krogstad of House Spirits, maker of Westward American single malt whiskey. Krogstad himself worked as a brewer for years before launching the Portland, Oregon-based distillery in 2004. Another distiller who emerged from the beer world is Lance Winters, a professional brewer before joining St. George Spirits in Alameda, California. Soon after arriving, he set about dabbling in whiskey, making it from malted barley and releasing a highly regarded line of American malts. Among St. George’s more prized releases today is Baller, an American single malt aged in sherry and bourbon barrels, then finished in casks that previously held Japanese-style plum brandy.

Rising out of those two traditions—scotch whisky and craft beer—American single malt has since blossomed, with a broad array of innovative approaches and flavor profiles. Single malt producers in Texas and Arizona contend with high heat and dry conditions, which can add robust flavor elements to aged whiskey. Cooler, more humid climates like the Pacific Northwest yield whiskey with a softer, more nuanced feel. Dozens of variations fall in between—making American single malt one of the most multifaceted and enigmatic whiskey styles in the world.

“I can’t tell you what the flavor profile of American single malt is in one sentence,” says Owen Martin, head distiller at Stranahan’s Colorado Whiskey. “If you taste McCarthy’s and then taste ours, they’re not really anything alike. They import peated malt, and we use local Colorado malt. We use new barrels, and they use used barrels.” His best attempt at describing Stranahan’s is to say the taste lies somewhere between bourbon and scotch. Colin Keegan, founder of Santa Fe Spirits in New Mexico, which makes Colkegan single malt, takes a similar route in explaining the flavor profile of his whiskeys, framing them as somewhere between a softer Irish whiskey and a more assertive scotch.

Keegan says American single malts have indeed embraced terroir, though not exactly like French wine or scotch whisky, where regional styles emerged over centuries. American producers are instead being highly proactive in creating whiskeys that set out to reflect the distinctive characteristics of their regions. Keegan produces his smoky New Mexico whiskey with a mashbill that’s one-third mesquite-smoked barley malt. He sought a style that reflected the Desert Southwest, and mesquite was a natural option. Mesquite smoke isn’t part of a long local distilling tradition—in fact, Keegan’s malt is custom smoked at a malt house in Wisconsin—but the whiskey proudly proclaims a regional connection with its flavor. 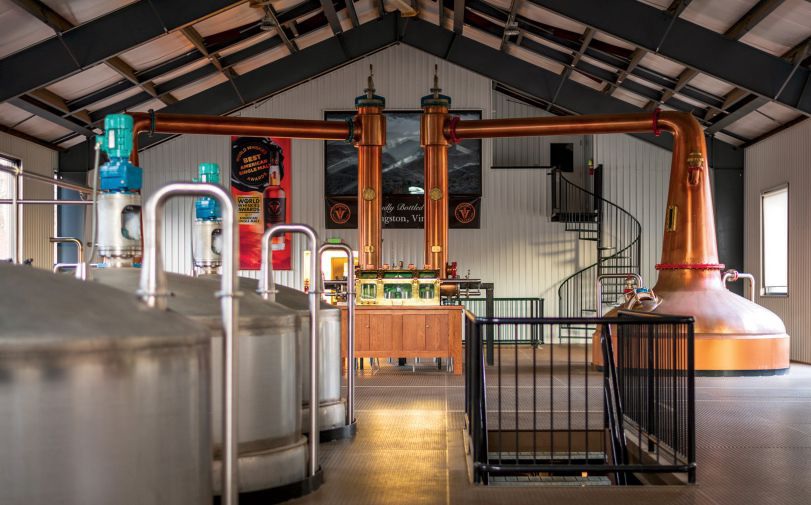 Jared Himstedt, head distiller at Balcones Distilling in Texas, strives to let the grain speak loud and clear in his single malts. The Balcones range includes Classic, made wholly with Texas malted barley, and Lineage, a blend of distillates from Texas malt and Golden Promise Scottish malt. Himstedt notes there’s more “hayfield and barnyard” in the Texas grain, along with herbal elements, with the Scottish malt delivering more pear, apple, stone fruit, and banana bread.

In Seattle, master distiller Matt Hofmann and his team at Westland Distilling have been exploring how to capture the varied flavors of the Northwest in their whiskeys. They’ve centered their efforts in the Skagit Valley, about 75 miles north of Seattle, using dozens of different barley varieties in seeking out a range of flavors. “Anytime we use a variety of a tan or blonde grain, it’s like a pilsner or a very light ale of some sort,” notes Hofmann. “With the darker varieties, there’s much more earthiness, nuttiness, and interesting fruit characteristics.”

Westland has also produced whiskeys aged in barrels made from garryana oak—a wood native to the Pacific Northwest that is said to add a rich crème brûlée note—and smoked its barley malt with peat harvested on the Olympic Peninsula. “Regionality is inevitable to a certain extent,” says Hofmann, “and it will get more and more concentrated. But the beauty of American single malt is that it’s hugely diverse—massively more so than scotch or bourbon. You can reflect a huge range of agriculture and aging climates.”

Can too much variation be a bad thing for a style hoping to gain greater recognition? If few guidelines exist, prospective buyers might have little idea of what they’re getting. In 2016, nine craft distillers founded the American Single Malt Commission to define American single malt and push for legally binding standards. They sought guidelines narrow enough to ensure integrity, but broad enough to encourage experimentation and innovation. The group settled on a definition: American single malt should be made from 100% malted barley; mashed, distilled, and matured in the U.S.; distilled at a single distillery; matured in oak barrels (used or new) not larger than 700 liters; distilled to no more than 80% alcohol by volume (ABV); and bottled at no less than 40% ABV (the same minimum still and bottling proofs mandated for all American whiskeys). Support has grown among craft distillers, with the commission now comprised of nearly 100 distiller members.

But none of those guidelines are binding. The designation appears on many whiskeys’ labels, but it’s only a descriptor in the eyes of federal regulators, with “whiskey” being the official class. And as long as it’s distilled from a “fermented mash of grain,” a spirit is considered to be whiskey. “You could make [American single malt] from 100% quinoa if you wanted,” says Krogstad. Last fall, the Alcohol Tobacco Tax and Trade Bureau, which regulates liquor labeling, announced that a formal definition of American single malt will soon be released for public comment. At press time, enactment was expected to occur some time in the middle of this year.

The official designation could accelerate the process of educating whiskey lovers about American single malts. Ideally, store owners might then be more inclined to give these whiskeys a showcase of their own, and bartenders will be more embracing of a style that has been lingering on the margins. “People will start thinking about [American single malt] as they go down the aisles,” Keegan says. “I think it will open the door to people who drink bourbon or rye.” 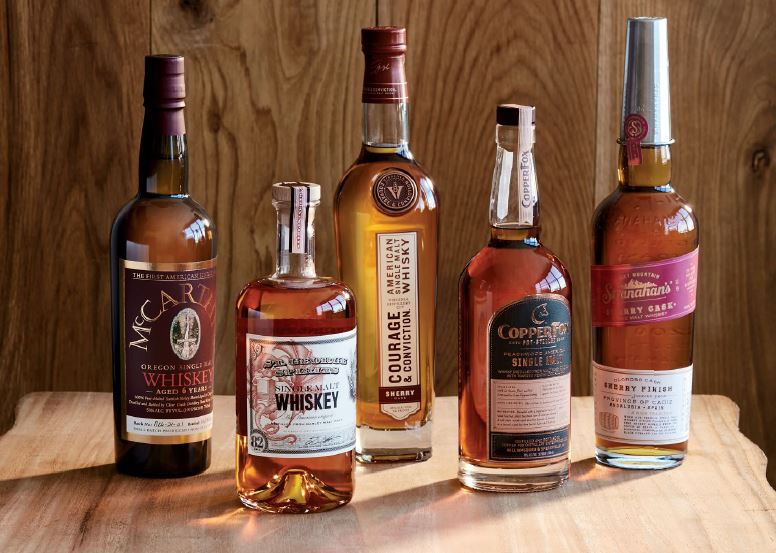 Spice, charcoal smoke, barbecued meats, and mint, with a touch of sweetness