What's It Worth? Glenfiddich

Glenfiddich was one of the key distilleries behind the growth of single malt scotch in the 1960s and is now one of the most ubiquitous scotches in the marketplace. But as far as whisky collectors and connoisseurs are concerned, there can be a price to pay for being a mainstream brand; modern whisky drinkers assume they know everything about it already, and collectors overlook it in pursuit of other acquisitions.

Auction houses welcome sales of collectible Glenfiddich, from the distillery’s Rare Collection, Private Vintage, and Vintage Reserve series, and through previous iterations of the 30 and 40 year old, early bottles from the 1960s, and limited editions such as Glenfiddich Snow Phoenix. The distillery has never stopped courting whisky collectors; Glenfiddich was the first scotch whisky brand to launch a whisky NFT on BlockBar.com in October 2021, and it introduced a bold new look in 2022 with the Glenfiddich Time Re:Imagined collection. The latest Glenfiddich 50 year old is only the fourth release to carry this age statement since 1991, but at $50,000 a bottle, it costs considerably more than the current highest auction price achieved for the first release.

Unlike most scotch whisky companies, Glenfiddich’s owner William Grant & Sons does not sell casks of its single malt whisky on the open market. Consequently, the handful of Glenfiddich independent bottlings perform exceptionally well at auction. With that in mind, we set the bar at $10,000 and above for this list, tracking down Glenfiddich’s highest hammer prices at auction. Whiskies of great age, scarcity, and exclusivity were key to making the cut. 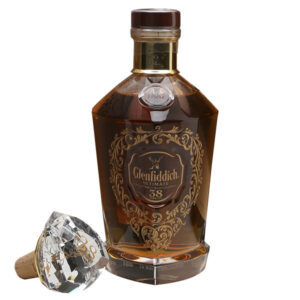 This was bottled for the Chinese market in an initial run of 600 bottles. The whisky was matured in American and European oak casks, and each decanter is decorated with 24K gold. 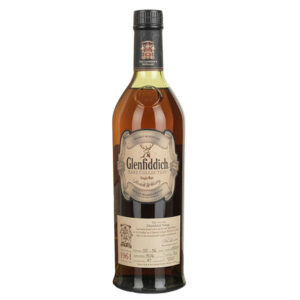 One of 56 bottles filled from cask no. 9016, with the box and label signed by Glenfiddich malt master Brian Kinsman.

Sherry cask no.10976 yielded 300 bottles for this independent bottling from Hart Brothers, and the distinctive bottle depicts the seven Stuart monarchs on gold medallions. 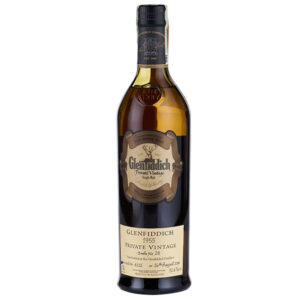 The Private Vintage series ran from 2001-2008, and included some of Glenfiddich’s oldest casks in the warehouse. This was hand bottled from cask no. 4221.

This was an independent bottling for Peter J Russell & Co, Edinburgh, the company that later acquired Ian Macleod & Co., now owners of Glengoyne, Tamdhu, and Rosebank Distilleries. Its year of distillation is one year earlier than the oldest casks used in the first release of Glenfiddich 50 year old. 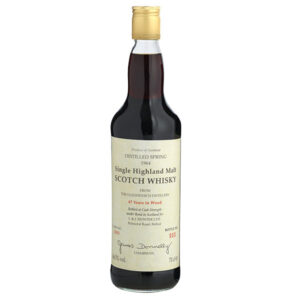 This was a release of 24 bottles, bottled in bond in Scotland for J&J Hunter Ltd., Belfast, a wine and spirits merchant, and it came in a presentation box with a tasting sample. It has an incredibly dark color for Glenfiddich, a result of its long maturation in a first-fill sherry cask. 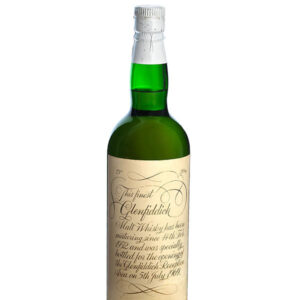 Bottled at 75 proof, this is a 17 year old Glenfiddich bottled for the reopening of the Glenfiddich Reception Area on July 5, 1969.

Only 6 bottles of this Glenfiddich 40 year old from Cask no. 3959 were produced, and no ABV was stated on the label. It was served at a presentation dinner in London where William Grant & Sons were awarded Distiller of the Year 1999 at the International Wine and Spirit Competition. 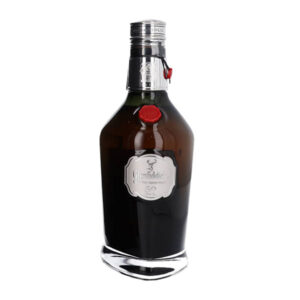 The third release of Glenfiddich 50 year old was packaged similarly to the 2nd release, but with a lower ABV. It came in a lockable box, with a book about the release and a presentation plinth inside. 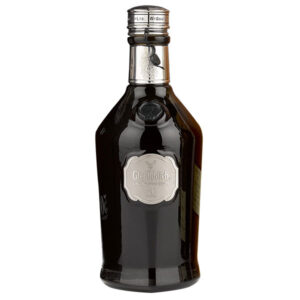 While 500 bottles were produced, Glenfiddich only made 50 bottles available each year over a decade, with the detail of the bottling number incorporated into the inside panel of the lockable presentation case. This 50 year old scotch scored 92 points in our winter 2009 buying guide.

This expression of Glenfiddich was finished in French cognac casks and was released with a suggested retail price of $600. The distillery engaged a number of international artists to stamp their own style on the packaging, and this work of art by Swiss artist Simon Berger was the highest-priced bottling of the five portraits he created in glass, which were sold exclusively through Whisky Auctioneer.

One of only three bottles produced for DFS Masters of Wine & Spirits 2019 in Singapore. This may have been the only chance to buy one at auction. 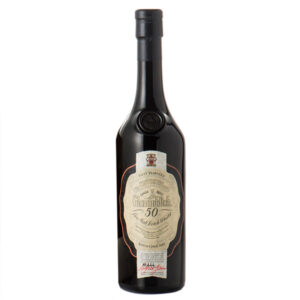 The first release was bottled on July 26, 2001 and contains whiskies laid down between July 17, 1937 and December 14, 1939. Alexander (Sandy) Grant Gordon (1931–2020) signed the certificate that comes with each bottle. He was the great-grandson of William Grant and the man who launched Glenfiddich Straight Malt in 1963 in the green triangular bottle. The scroll invites the owner to become a Freeman of Glenfiddich Distillery, a transferable privilege when the bottle is sold at auction, and one that Glenfiddich has only dropped recently with the release of the Glenfiddich 50 year old Simultaneous Time release from the Time Re:Imagined Collection. 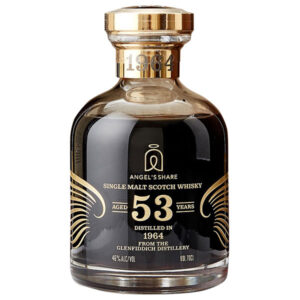 This is the highest-priced independent bottling of Glenfiddich, one of 100 bottles released by Angel’s Share, a Hong Kong-based company, from a first-fill sherry hogshead (cask no. 10793). The company is now preparing to launch the whisky as an NFT.

Glenfiddich created the Janet Sheed Roberts bottling to celebrate the remarkable long life of William Grant’s granddaughter–she died on April 6, 2012 at the age of 110 years old. William Grant & Sons created 15 bottles, making 11 bottles available to the public via charitable auctions around the world, though none match the price achieved in New York. 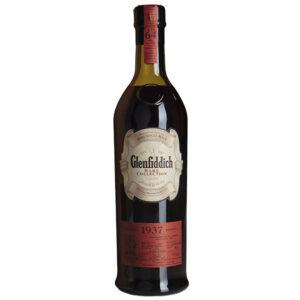 David Stewart, then malt master of Glenfiddich, selected cask no. 834 for bottling, and 61 bottles were filled on October 24, 2001. Auctioned exactly 18 years since its bottling date, this was the oldest official release of Glenfiddich for many years–only surpassed by a 66 year old whisky with the arrival of Glenfiddich The 1950s collection. 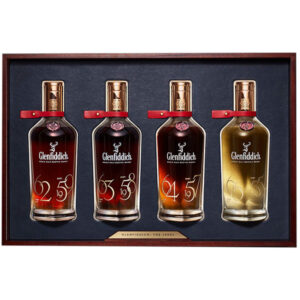 1. Glenfiddich The 1950s Collection, 40.1%-45.5%
Original Release Date: 2021
Sold at Auction: December 3, 2021 at Sotheby’s, Edinburgh
Hammer Price: $1,098,195
This set of four bottles containing whiskies aged for 62-66 years was created for the Sotheby’s Distillers’ One of One auction at Barnbougle Castle, near Edinburgh from whiskies distilled in 1955, 1957, 1958, and 1959. Selected by the sixth malt master, Brian Kinsman, these whiskies were filled into cask under Gordon Grant, the third malt master. The whiskies were presented in a Baccarat decanter with a 24K gold neck with engravings in gold leaf, and presented in a cabinet by N.E.J. Stevenson which incorporated a Fischer thermometer and hygrometer. The Distillers’ One of One is a biennial philanthropic auction organized by the Distillers’ Charity of the Worshipful Company of Distillers to benefit their Youth Action Fund.