A small island nation with a cool, windy, and damp climate sits about 200 miles northwest of Scotland. It has a population of around 52,000 people and its main industry is fishing. And now it's home to a new whisky startup. The Faroe Islands—which, despite their proximity to Scotland, are a self-governing territory within the Kingdom of Denmark—will soon welcome Faer Isles Distillery, which has just begun crowdfunding efforts.

Sales for membership to the Faer Isle Founders' Club began on Aug. 1. For €200, members will receive lifelong membership, a bottle each of Faer Isles Founders' Club Edition Gin and new make Faer Isles single malt, and a bottle of Faer Isles First Edition 3 year old single malt once the spirit has completed its aging process. “The first edition will be a peated whisky [matured in a] bourbon cask, but we will also be experimenting with maturation in different casks from day one in order to see how the whisky will optimally mature,” says Dánial Hoydal, founding partner of Faer Isles Distillery.

Faer Isles' location means it will operate a bit differently than a distillery elsewhere. “Even if there is an old tradition for growing barley on the Faroe Islands, this today is very small-scale and not sufficient for industrial use,” Hoydal says. “Therefore we will have to import the malt from Scotland, where they will use local peat.” He adds that the island does possess “an abundant amount of peat,” so the distillery may experiment with its own malt in the future. 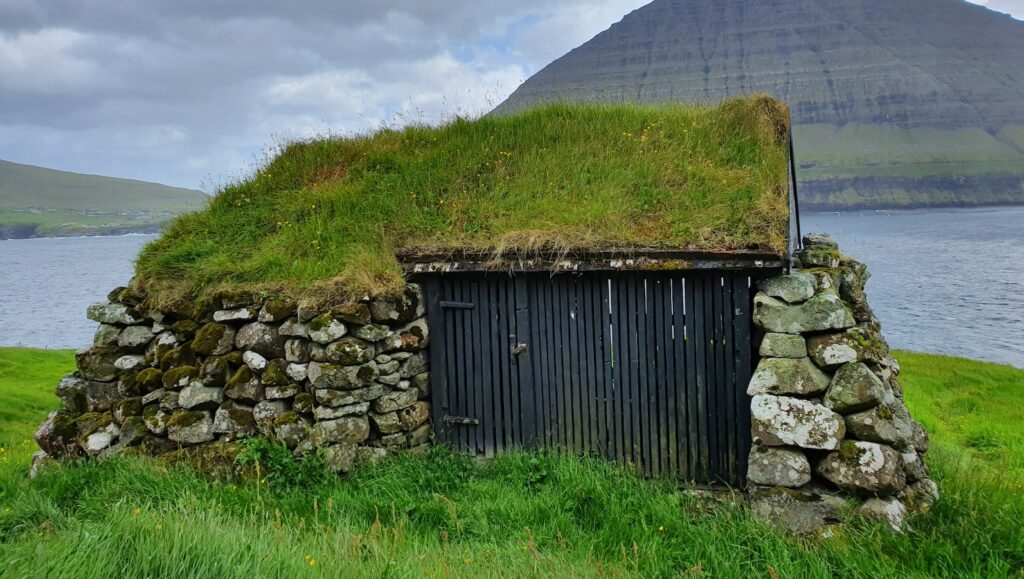 Faer Isles will utilize a version of the "opnahjallur," a traditional Faroese wooden drying house with gaps that allow wind to pass through, to mature whisky.

Regardless of the origin of its grain, Faer Isles' whisky will bear the mark of its birthplace. “We plan to use local, traditional methods for maturation that have been used for centuries to create the distinct culinary elements of the islands,” Hoydal says, explaining that the architectural design of the distillery will also add an element of local flavor. Faer Isles plans to erect buildings based on opnahjallur, traditional Faroese wooden drying houses with gaps that allow the cool wind to pass through. “The storage facilities will be constructed in the same way, however with modern design elements making the turf roof blend into the surrounding landscape,” Hoydal says, adding that he believes this method of maturation will be reflected in the whisky through maritime notes.

These 12 Distilleries Embrace the Extreme

Production has been in a testing phase for the past two years on a small system, and the company is now investing in equipment that can produce 400 liters of pure alcohol (lpa) a week as it moves into this next phase. The full distillery will come on line in the third phase and produce about 800 lpa a week. The testing phase has been managed by two Faer Isles founders: Bogi Mouritsen—who also founded Einmalt, the Faroese Whisky Association—and engineer Bjarni Lamhauge. Hoydal is also a founder, as is Christian Grahn, who is CEO of data management company Keel Solution. Rounding out the distillery staff is Glenfiddich alumna Jana Jacobsen, who serves as customer manager. Faer Isles also has an advisory board made up of spirits and business experts, including independent spirits consultant Julia Nourney, founder and CEO of Vivino Heini Zachariassen, business development manager at Badachro Distillery Michael Fraser, and business development consultant and barrel broker Alexandre Sakon.

A NEW WAY TO FUNDRAISE

Opening a whisky distillery on the Faroe Islands is remarkable enough, but for Faer Isles, it gets even more unconventional. The second phase of crowdfunding, which is due to start on Oct. 1 according to the distillery's timeline, will be done via a security token offering (STO), also known as cryptocurrency. Hoydal estimates that it's the first whisky distillery in the world to be funded in this way. “This is token-based crypto funding, so it is basically a very efficient and consistent method to create a digital share register to keep track of all the micro-owners registered through the crowdfunding platform,” he says, adding that while U.S. and Canadian residents can participate in the first phase of crowdfunding, the distillery can't guarantee that they'll be able to participate in phase two because the “cryptoplatform may be limited by local legislation.”

With a team secured and crowdfunding in its first stage, Faer Isles is off to a running start. The detailed timeline on its website lists each milestone the distillery plans to accomplish along the way, such as purchasing land for the distillery, warehouse, and visitor center in Kvívík—a centrally located village—in September 2020, starting production in the new Kvívík distillery in spring 2023, and the first official batch of whisky (made at an interim distillery that Hoydal says was previously used to store fishing equipment) reaching 3 years of maturity in spring 2024.

While many elements are at play in this new endeavor, it all comes back to the land itself, and how the new distillery's location will benefit the whisky. “We believe that the local climate of the remote Faroe Islands is perfect for maturing whisky,” Hoydal says. “The very humid climate with year-round stable temperatures and very salty winds create the optimal environment for creating whisky.”

Update 8/20/2020: This article has been updated to reflect new information about whisky distilling in the Faroe Islands. Faer Isles will be the country's first dedicated whisky distillery; however, Einar's Distillery, owned by Faroese brewing company Føroya Bjór, has been making whisky, along with vodka, gin, aquavit, and a bitter liqueur, for several years, with a planned release for the mature whisky in December 2020.
Single Malt sstone News World Whisky Openings