Can Zero-Proof Whiskey Stand In For Your Daily Dram?

There's nothing like a good whisky, except, perhaps, another good whisky. Yet even whisky lovers may decide to take a break from time to time for medical, religious, or other reasons. Whatever the motive, abstaining no longer means a choice of just soda or seltzer. Now there is a range of alcohol-free alternatives for when you're off the sauce or just want to lighten the proof load of your usual tipple.

“The vast majority of consumers are not necessarily vigilantly sober daily,” says Lauren Chitwood, who co-founded Spiritless in 2019 and serves as its CEO. “They're really just looking to curb consumption and increase moderation.” Spiritless's first product, Kentucky 74, is a dealcoholized “whiskey” that's made in a two-step process. First, grain neutral spirit and oak are combined in a pot still, using pressure, vapor, and temperature variations to create a highly concentrated extract. The resulting liquid is put into a second pot still and “reverse distilled”—the alcohol is cooked off, and what's left is a liquid containing oils, tannins, and other flavor molecules that is then pH-adjusted to become shelf-stable.

Other alcohol-free “whiskies” are made by blending essential oils, flavor and aroma extracts, and distillates of oak or other ingredients, sometimes with a little sugar and with preservatives added. All list their contents on the label, and may occasionally take on a hazy appearance due to ingredient separation. Since they have no alcohol to act as a preservative, these products generally need to be consumed within a few months after opening.

While many of these alcohol-free liquids claim to closely mimic whisky, you'll likely want to avoid attempting to sip them from a Glencairn glass: Served neat, they definitely don't taste like the real thing. All are thin in body, and while most have some flavors in common with whisky, the full experience of nose and palate is decidedly unorthodox. But totally replacing your usual three fingers on the rocks isn't necessarily the point, either. As Chitwood says, “We are not at all trying to step on toes. We just want to ride along and be a great option for when you were either going to not participate or do something else.”

Where these whisky alternatives can succeed is in cocktails, especially those that balance them with other distinctly flavored ingredients, like the citrus-forward Whiskey Sour and—with the right vermouth—the Manhattan. Avoid using them in drinks like the Old Fashioned that make whiskey the star; the results are underwhelming at best.

You might also try splitting the base of your usual cocktail to lower, but not eliminate, the alcohol by volume (ABV): half whisky, half whisky alternative. The result will taste different than a cocktail made with whisky, so pull out your lesser-used bitters; a few dashes of, say, plum bitters in a Sour or chocolate bitters in a Boulevardier can round out the cocktail without adding ABV.

Whisky Advocate tested four alcohol-free whisky substitutes, tasting them neat and in a variety of cocktails—both low and no proof—to find ideal uses for each.

Where's the Proof? Putting Alcohol-Free Whiskey to the Test 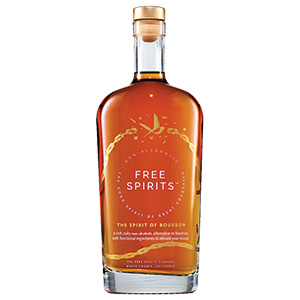 Free Spirits Co. The Spiritof Bourbon—$37
The claim: “A rich, oaky, caramel-kissed non-alcoholic alternative to a great Kentucky bourbon.” It contains “functional ingredients,” including vitamin B3 and B6, and taurine.
In the glass: Bubble gum, yellow cupcake, and gummy bears on the nose, with flavors of French vanilla creamer and tingling spice.
Recommended use: Hot Toddy with lemon juice, honey, and a cinnamon stick.

Lyre's American Malt—$36
The claim: There's no such thing as a “bourbon malt,” but that's what Australia-based Lyre's says it's emulating with this umber-hued beverage.
In the glass: Aromas of light spice, hay, and cotton candy give way to a palate with the syrupy sweetness of vanilla and orange.
Recommended use: In a no-ABV Boulevardier using Lyre's Aperitif Rosso and Italian Orange. 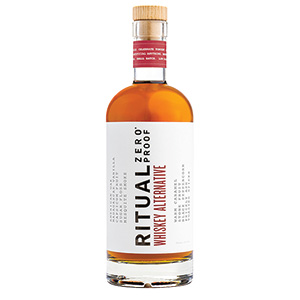 Ritual Zero ProofWhiskey Alternative—$27
The claim: “[It] delivers the taste and burn of good whiskey, only with no alcohol or morning hangover.”
In the glass: A nose of pink peppercorn, zesty citrus, and strawberry Blow-Pop is followed by pineapple, lemon, prune, and spice flavors. The only one with a somewhat textured mouthfeel.
Recommended use: New York Sour; the red wine float highlights dark fruit flavors in the Ritual.

Spiritless Kentucky 74—$36
The claim: “A beautifully distilled non-alcohol spirit crafted to complement your favorite bourbon cocktails. It serves up a high-quality, smooth finish...without sacrificing flavor.”
In the glass: The most complex of the bunch, with vanilla, orange, cherry, and sweet spice throughout the nose and palate.
Recommended use: Split the base of a Highball with this and your usual bourbon, adding seltzer and a citrus twist for a refreshing lower-proof cocktail.
Distillations Summer 2021 Insights sbarton