Islands have always held special allure in the world of whisky. Scotch whiskies from the islands of Islay, Skye, and Orkney are renowned for their salty, often smoky character. Meanwhile, America's traditional whiskey heartlands of Kentucky and Tennessee are located in hilly uplands far from the sea. But now, whiskey is being made in every parcel of the United States, including those surrounded by water. Pummeled by nor'easters and gales, America's island distillers produce whiskeys that owe as much to the Scottish isles as to their compatriots in Kentucky and Tennessee. These are whiskeys that capture the essence of the sea.

Windswept Nantucket, 30 miles off the coast of Cape Cod, has been a nautical haven for centuries. The island grew fat on whale blubber, and even today it is as much a historic nautical community as a luxury summer colony. It's here that Randy Hudson, owner and distiller at Triple Eight Distillery, has made whiskey for nearly two decades. His Notch single malt tastes of salt and sea spray. Hudson is certain that the island is responsible for the maritime flavors. Nantucket is influenced both by polar air coming from the Arctic and the more temperate Gulf Stream—the same set of climatic conditions that prevail in western Scotland. “Even if you took all of our processes and did everything the same way, but distilled somewhere else and aged these barrels somewhere else, [the whiskey] would be different for sure,” says Hudson. “I like to tell people that come on tours that they should think back on their first experience coming to the island. When they walked up on deck in the middle of Nantucket Sound or when they stepped off the plane, it really hits you. It's very different just breathing in that air, and to think that the whiskey is residing in that environment full time; it's got to be beneficial.”

Triple Eight's single malt ages in an open warehouse on Nantucket, fully exposed to the wind and sea air, and even the occasional Nor'easter or spring gale—neither of which succeeds in shutting down distillation for the day. “We just keep on grinding,” Hudson says. Notch is far older than most American craft whiskeys—the current release has a 12-year age statement, nearly unmatched in American single malts—so it has plenty of time to soak in the sea flavors. The distillery's Nor'Easter bourbon, a blend of island and mainland whiskeys that complete their maturation on Nantucket, also picks up hints of the sea while aging on the island. “The bourbon that we were sourcing just never seemed quite right when we got it, but we would notice a difference within 6 months of it being here,” Hudson says. 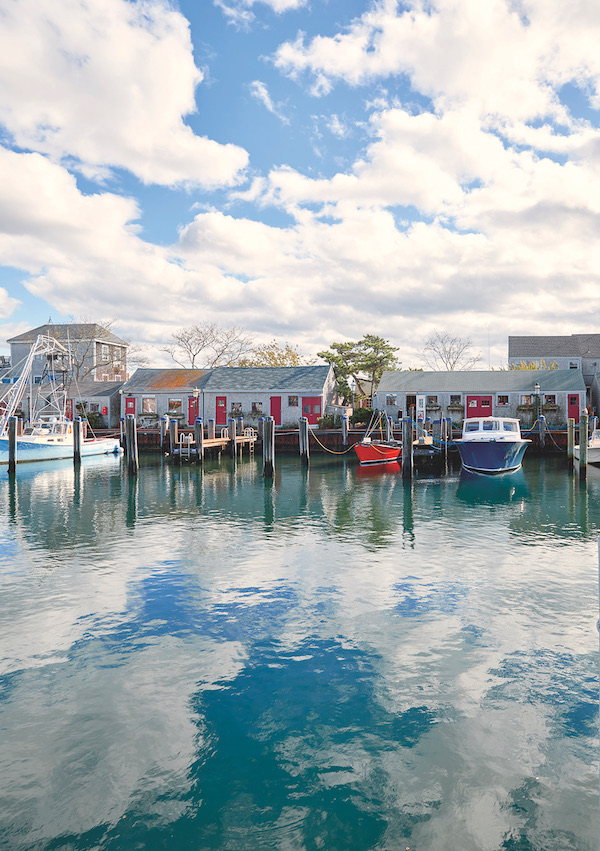 Two centuries ago, Newport, Rhode Island had almost two dozen distilleries, most of them making rum. Today it only has one: Newport Distilling Co., which began making rum and whiskey as an offshoot of Newport Storm Brewery in 2006. Co-founder and master distiller Brent Ryan sees a strong maritime influence in his Sea Fog American whiskey. The 7 year old peated single malt is distilled and aged entirely in Newport, which lies on Aquidneck Island. “I definitely get some salty, brackish character from being near the salt air,” says Ryan, who actively cultivates the benefits of seaside aging. The distillery matures its whiskey in used barrels, which impart muted flavors, allowing the environmental influence to shine through. “By aging in a coastal area, there's a more temperate climate,” Ryan says. That slows down wood extraction. “You end up with a whiskey that certainly has quite a bit of barrel character, but continues to maintain a focus on the distillate that you just don't see with a lot of American rye and bourbon whiskeys.” The island lends unique character, but where do these island flavors actually come from?

The whiskies of Islay are the most famous island whiskies in the world. “Being on the island where we are, on the west coast of Scotland, the weather is very damp and windy and there's a lot of sea salt in the air,” says Kilchoman Distillery founder and managing director Anthony Wills. “Our style of whisky has a certain maritime character and we age it in warehouses close to the distillery, and the air is circulating all the time.” However, Islay whiskies that are aged on the island are more the exception than the rule. Some of the most iconic whiskies of Islay are distilled on the island and shipped to large central warehouses in the Lowlands. Yet they also display distinct maritime character. That's because seaside maturation isn't the only source of maritime flavors: choices made during distillation, like using Islay peat and water, also capture some of the island's flavors.

While some of the alchemy of maturing whiskey flavors remains almost magical, science can help explain some of the process. Certainly the sea air makes a difference, as do Nantucket's temperate climate and the fairly low pH of the island's natural aquifer. It's impossible to put your finger on one thing that makes island whiskey taste like it's from an island.

St. George Spirits has made and aged whiskey on Alameda for years, but master distiller Lance Winters doesn't see much of an oceanic impact. In contrast to Nantucket and Islay, Alameda is located on the eastern side of San Francisco Bay, heavily sheltered from the Pacific. “While it's difficult to say with certainty that there's absolutely no influence because it's all that we know, my sense is that because we're reasonably temperate here, and there are no waves to throw mist into the air, we don't get any coastal influence to speak of,” says Winters.

In the Puget Sound of Washington State, maritime character varies across the windswept Whidbey Island's distilleries. Whidbey Island Distillery distills and ages all its whiskey on the island, but general manager Mike Huffman sees little maritime influence. “The sound is salty—we can wake up and smell that in the air,” he says. “But I don't know how much it really affects our whiskey or even our liqueurs at this point.” Maturation vessels and time may be the key to that result. Founded by a rocket scientist, Whidbey ages its whiskey for just 4 to 5 weeks in a relatively neutral barrel that contains new and used white American oak staves. While the benign barrels might seem to invite maritime flavors, it appears the whiskey's stay is too brief for the sea air to have a noticeable effect. “When you make whiskey, you can't help but become a product of your environment. The ones we do now just aren't in there long enough for any of that to happen,” says Huffman, noting their traditional rye will enjoy a longer maturation. “Those barrels, I think, will have more effects from that salty-sweet air,” he says. 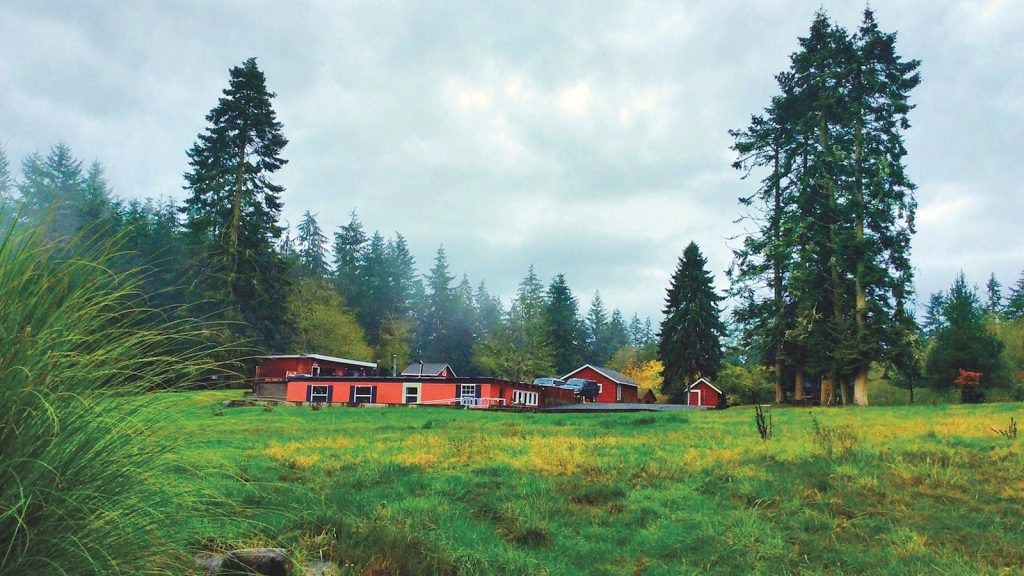 Since 2009 Whidbey Island Distillery has been making spirits in the mist of Puget Sound's oceanic climate.

Just four miles away at Cadée Distillery, founder Colin Campbell ages sourced mainland whiskey at Cadée's warehouse on the island, opting to proof the whiskey before bottling with Whidbey Island water. “Whidbey Island has one of the largest peat bogs in North America, and the water table is [only] ten feet below the surface on average,” Campbell says. “So we are adding flavor that's coming from that natural peat source when we're cutting the product.”

Even factors like atmospheric pressure can impact island whiskey. “We are situated in a barometric trough between the Olympic Mountains and the Cascade Mountains,” Campbell notes. “The pressure differential is constant between the two mountain ranges. As such, it squeezes our barrels in a regular fashion that increases our absorption and evaporation … so much so that we lose over 20 percent to evaporation and absorption over the first couple of years. But the advantage is it creates deeper flavor, deeper color, in a shorter period of time.” Ryan of Newport also sees effects from atmospheric pressure. Islands tend to be at low elevation. Elevation affects pressure, and pressure affects boiling points—which affects the distillation run. “When you're at sea level, you have the highest boiling points, and that affects your still's performance—you have a much broader boiling point differential from start to finish,” Ryan says, noting this longer window of opportunity allows him to more precisely manage the flavors in the distillate.

It will come as no surprise to anyone who's stood in crashing waves that ocean air truly has salt in it, or more precisely, sea salt aerosols—sodium chloride (table salt) and other particles—that the ocean's waves and bubbles kick into the air, especially in areas with high wind speeds. As the liquid level in barrels of maturing whiskey drops over time due to natural evaporation, the remaining space fills with the prevailing air. “The logic would say that if alcohol vapor is getting out, then something else is getting in,” explains Bainbridge Organic Distillers founder and master distiller Keith Barnes, who distills on Bainbridge Island in the Puget Sound, directly west of Seattle and south of Whidbey Island. “Air is passing through our barrel warehouse all the time. If we're smelling salt in the air, then it's a pretty good bet that that's what's getting inside the barrel.”

For Barnes, maritime effects of maturation become increasingly evident as the years go on. The distillery's small-barrel whiskeys are generally aged for 3 to almost 4 years, while larger barrels will age for at least 6 or 7 years and have a stronger maritime influence. “I'm interested to see, as the wood elements calm down, how some of the other things like salinity and ambient air begin to impact the whiskey in a more subtle manner,” Barnes says. He dreams of a day when craft distillers can lay down barrels for decades, as the Scots do. “To envision, ‘Hey, this is going to be a 40 year old whiskey…' we're all salivating at that. If it's aged out in Nantucket, or it's aged on Bainbridge Island, or it's aged out in Grays Harbor County for Westland, it's going to have a significant maritime character to it. That's where we want to be.”
Features Dispatches American Whiskey apolonski Winter 2018