Arguably the most indecipherable scotch name in a sea of them, anCnoc (pronounced a-NOCK, meaning “the hill;” the distillery's actual name is Knockdhu) makes up for its curious moniker with clean, clear flavor. Knockdhu opened in 1894, though nearly a century passed before its whisky was bottled as a single malt. “The place was a bit unloved,” says distillery manager Gordon Bruce, who since 2006 has been upgrading Knockdhu to make production more efficient and environmentally friendly. Even so, the distillery remains cheerfully old school, with not a single screen or monitor to be found; the most high-tech tool used by staff is a calculator. “The guys are so good” they don't need more advanced technology, Bruce notes.

Bruce's minor but ingenious tweaks surely help, starting with the wort, the sugary liquid created during mashing. It goes through a custom filter, inspired by a cyclone-style vacuum cleaner, to remove even the tiniest particles: the clearer the wort, the cleaner the whisky's flavor. At Knockdhu, the wort ferments in six regular washbacks; after about 45 hours, it gets filled into two large “fermentation vessels,” allowing for a longer fermentation time to create a super estery wash that's distilled into bright fruity spirit, ideal for maturation in bourbon casks.

Only about 20% of Knockdhu's production is destined for anCnoc single malt, with the rest going into blends. The distillery makes peated whiskies as well, which showcase its characteristic restraint and purity with an added smoky dimension. No longer unloved, anCnoc has found its niche. 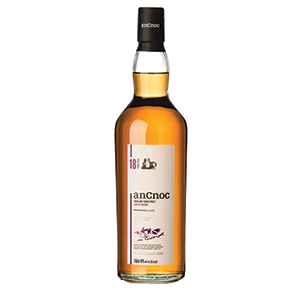