As With Bourbon, Kentucky Is a Thoroughbred Pacesetter

Kentucky, land of bourbon and horses, is a magical place. Within her borders lie hundreds of equine farms, making the Bluegrass State the world's leader in thoroughbreds as well as bourbon. With more than a million acres of Kentucky land maintained for horses, it's hard to miss the rolling pastures that are home to these remarkable creatures, that can be seen munching on grass and swatting pesky flies with their tails as you drive by.

Kentucky became home to thoroughbreds for many of the same reasons bourbon did: a four-season climate, fresh air, and limestone-filtered water. While providing a superb base ingredient for whiskey, the water also delivers a wallop of bone-building calcium to the pasture grass, along with its famous tinge of blue. Horses and bourbon were part of the picture even before Kentucky became a state in 1792. Commercial whiskey was distilled in Kentucky since the 1700s, and explorer Daniel Boone is credited with introducing a bill in Kentucky's first Legislative Assembly aimed at “improving the breed of horses.”

Today's Bluegrass country—a patchwork of pastureland stretching throughout central Kentucky—is home to more than 450 horse farms, many with storied pedigrees. Claiborne Farm in Paris, owned by the Hancock family for over a century, has been home to big-name horses like Secretariat and Seabiscuit. Nearby Runnymede Farm has raised thoroughbreds since the end of the Civil War. Stonestreet Farm is owned by the Jackson family, the renowned California vintners known for Kendall-Jackson and a host of other wines. Using his experience in finding and cultivating vineyard land in California, the family's late patriarch, Jess Jackson, sought out just the right location for horses. Calumet Farm in Lexington, identified by its pristine white fencing and red-trimmed white barns, holds the record for the highest number of Kentucky Derby winners, at eight. 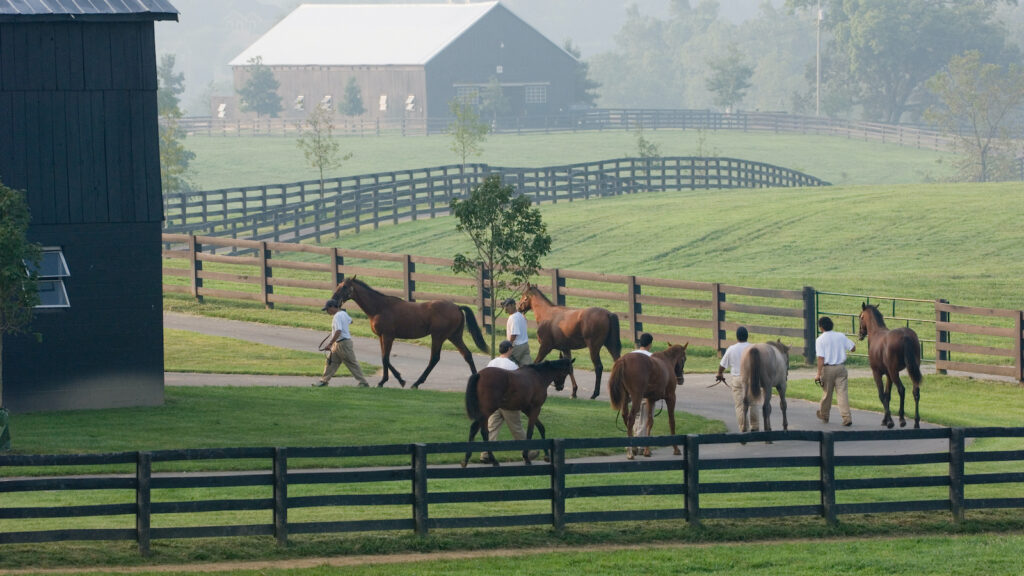 A horse doesn't randomly grow up to race in the Kentucky Derby. Planning is often years in the making—with science, genetics, racing history, bone structure, and a little luck thrown in—before breeding takes place. The horse farms themselves are luxury accommodations with well-appointed barns (some with chandeliers and padded floors), manicured pastures, and impeccably maintained fencing.

Ashford Stud Farm in Versailles is part of Ireland-based Coolmore Stud, the world's largest thoroughbred breeder, which is owned by Irish business magnate John Magnier. (Ashford's land was originally part of a cattle farm owned by Col. Edmund H. Taylor Jr., founder of Old Taylor Distillery in nearby Frankfort, recently restored and rechristened as Castle & Key.) At Ashford, the horses lead a cushy life filled with sunshine and fresh air, and each has about a private acre of pasture. The farm employs more than 100 people—all focused on caring for its 16 stallions—either working directly with the horses or maintaining the farm's 4,000 acres of lush grounds.

Enjoy Bourbon and Horses Together at Hermitage Farm

When a male horse's racing career is over—usually around age three or four—he is put out to stud at farms like Ashford, where his job is to sire offspring to carry on his genes. Sometimes that job can go on for many years: An Ashford horse named Tale of the Cat, but often called the Elder Statesman, is 27 years old and still up to the task. In spring mating season, the stallion will breed with a mare—sometimes up to four times a day. The stud fee will depend on his racing history, pedigree, or both. One sought-after stallion is Uncle Mo, who is recognized more for his prized offspring than his racing career. When one of his colts, Nyquist, won the Kentucky Derby in 2016, Uncle Mo's stud fee doubled to $150,000, and currently stands at $175,000. American Pharoah, who won racing's Triple Crown (first-place finishes in the Kentucky Derby, Preakness, and Belmont Stakes) in 2015, commands a stud fee of $100,000. The price of entry is steep, but the returns can be sizable: Two years ago, one of American Pharoah's offspring sold for $8.2 million.

A female horse is known as a filly until age 3 or 4 and is then called a broodmare during her fertile years, from age 3 to 22. The females also have plush accommodations and spend their days frolicking in the pastures with their fellow mares. Gainesway Farm in Lexington works with horses at all stages of their lives, but typically has 100 or so broodmares on its 1,500 acres. At breeding time—usually from February through the first week of July—they help mare owners matchmake with one of the farm's seven studs. “We find out whether [the owners] want to breed, race, or sell, we research the pedigree, and we discuss a price range,” says Lakota Gibson, who handles sales and breeding at Gainesway. “Then we can find the right stallion.” A mare's pregnancy, known as being “in foal,” lasts about 11 months, so she gives birth about once a year. As her due date approaches, the farm's veterinarians monitor the mare around the clock. 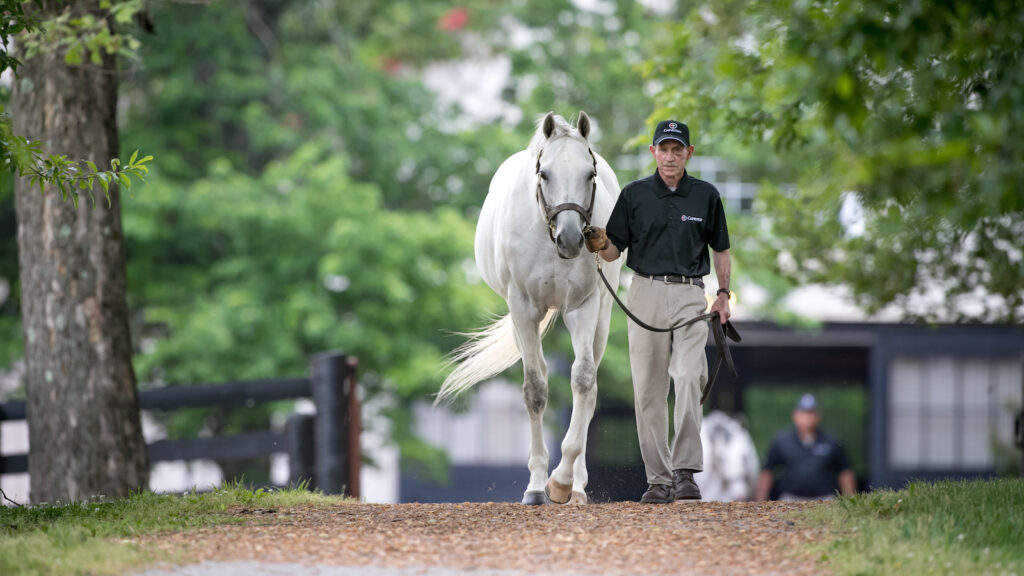 Tapit, one of seven stallions at Gainesway Farm, commands a stud fee of $185,000.

Life for most of these horses begins at the nursery farms, which pamper the mother mare and raise the foal for its first year or year and a half of life—essentially serving as an equine preschool. Mill Ridge Farm in Lexington has been raising thoroughbreds for six generations. Alice Headley Chandler, who grew up on the land, established Mill Ridge in 1962 to focus on foals, and has raised many winners there. The farm covers about 600 acres and is sometimes home to more than 225 foals. The babies stay with their mothers until being weaned when they're a few months old. The weanling (a foal that is no longer nursing) then gets moved to the fields with other adolescents. These teens, still getting used to their long legs and newfound freedom, play with their peers all day. Mill Ridge keeps a few older mares with them as a bit of adult supervision. The foals usually stay on the farm until the autumn of their yearling year, then head off to begin a life of training and racing.

When their careers are over, the horses need a place to live out their golden years. There are several retirement farms across the state, and among the best known is Old Friends Farm. This 236-acre retirement facility in Georgetown pampers thoroughbreds in their final years. Their mission is to provide a dignified retirement to the 128 horses that live there. Guests are welcome to walk the fence lines, led by a tour guide who can expound upon the achievements of its most famous residents. “We give the horses a sanctuary where they can live out their days,” says Old Friends board chair Cynthia Grisolia. “And we offer an opportunity to unite them with their fans.”