Located in the northern Highlands, a stone's throw from Glenmorangie Distillery, Balblair was founded in 1790 but has lingered in obscurity, tucked away off the main road without even a sign pointing the way until a few years ago. Its whisky, however, is every bit the equal of its famous neighbor's (and it has its own ancient carved stone, the Clach Biorach, just like Glenmorangie's Cadboll Stone). The majority of Balblair's production goes into blends like Hankey Bannister, but the single malt stands out for its structure, body, and balance, with citrus, flowers, vanilla, and—when sherry-matured—spice and leather. “It's instantly recognizable,” says distillery manager John MacDonald.

Until recently, Balblair was that rare scotch bottled as a vintage whisky, rather than with an age statement, and some of those bottlings can still be found on shelves. (The 1999 is particularly exceptional.) In 2019, the distillery shifted back to age statements, and while the bottles may look different, the whisky within continues to impress. “The move to age statements has allowed us to bring consistency to our collection,” says MacDonald. “[But] the people, the place, and our craft haven't changed at all.”

Balblair keeps things simple, fermenting in wooden washbacks and maturing its spirit strictly in thick-walled, earthen-floored dunnage warehouses in either bourbon or Spanish oak sherry casks. Rather than relying on barcodes to track the casks, the number of fills they've had is marked by stickers: one for first-fill, two for second-fill. The whole process is unhurried, just as everyone should be when sipping Balblair's whisky. 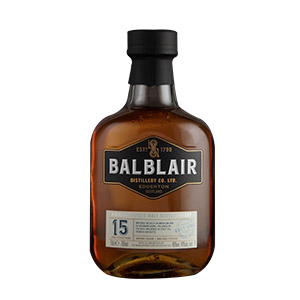