For the first time ever, Cigar Aficionado's Big Smoke event teamed up with WhiskyFest at the Seminole Hard Rock Hotel & Casino in Hollywood, Florida on October 30. It was a day filled with exquisite cigars, world-class whisky, and great company. A bounty of whiskies were poured at the event, alongside collectible cigars from some of the world's top cigarmakers. 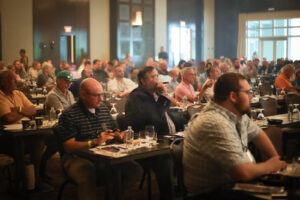 The day kicked off at 9 a.m. with a slew of sold-out cigar seminars that featured industry luminaries like Jorge Padrón, Rocky Patel, and Carlos Fuente Jr. Superb cigars were presented by all three cigarmakers—as were rich stories, given that each man has decades of experience in the industry. The morning concluded with the first taste of what was to come that evening: A shared whisky and cigar experience in a seminar that featured Heaven Hill master distiller Conor O'Driscoll. His talk highlighted the unique qualities of Whisky Advocate's 2020 Whisky of the Year, Larceny Barrel Proof (Batch B520), and the No.-7 whisky of 2020, Elijah Craig Straight Rye when paired alongside Cigar Aficionado's 2020 Cigar of the Year, the E.P. Carrillo Pledge Prequel.

That night, the true scope of the event could be experienced, with more than 2,000 attendees buzzing around a ballroom filled with whiskies from around the world, including such sought after pours as George Dickel 15 year old single barrel, Aberfeldy 21 year old, Paul John Mithuna, Kentucky Peerless Double Oak bourbon, Dewar's Double Double 21 year old, Glendronach 21 year old, and Jack Daniel's 10 year old Tennessee whiskey, among many others. On the outdoor terrace, more whisky and other spirits were being poured, accompanied by live music and plenty of cigars. 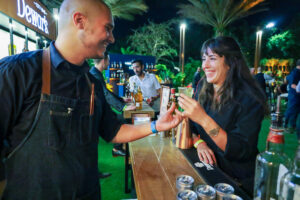 Given that 24 different cigarmakers were present at Big Smoke Meets WhiskyFest, the opportunities for whisky-and-cigar pairing were near endless, and attendees took note. “I love this combination—it's an excellent event, and the fact that I can try different cigars and whisky is incredible,” said Marc Lewis, who had previously attended both Big Smoke and WhiskyFest events. His favorite pairing of the night was Four Roses Select bourbon with a Padrón cigar. Elsewhere, Dan Timmerman—a first-time WhiskyFest or Big Smoke attendee—also enjoyed a Padrón cigar, this one smoked alongside Elijah Craig Straight Rye. “Before tonight I wasn't really a rye drinker, but the Elijah Craig had a terrific flavor alongside the Padrón, with spice enhanced in each,” he said.

The attendees weren't the only ones on a discovery tour; cigarmakers and distillers, too, were finding new ways to enjoy their products throughout the night. “I'm not much of a bourbon guy normally, but I've been trying different bourbons tonight, like the Heaven Hill 7 year old bottled in bond bourbon, with our cigars,” said Jose Ortega, vice president of sales at My Father Cigars. “That's the most positive part of this experience, venturing into those new pairings.” Over at George Dickel, brand ambassador Brian Downing was keen to see the ways in which cigars could enhance the whisky experience. “With something like the 15 year old Single Barrel, I'm interested to see how that shakes up to a cigar, not being much of a cigar smoker on a day-to-day basis myself,” he said. “If we can turn some cigar lovers onto the whiskey by being well paired, that's great.” 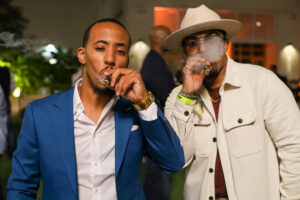 As with the morning, there were seminars throughout the evening, these focused exclusively on whisky. The first was led by Dewar's North American ambassador Gabriel Cardarella, who gave attendees the chance to blend their own scotch by using five different single malts, as well as taste Dewar's 8 year old Mizunara Cask Finish and Double Double 21 year old. Heaven Hill's Conor O'Driscoll and Bernie Lubbers rounded out the evening of seminars with a discussion on the renaissance of rye whiskey in the U.S., and a tasting of various ryes in the Heaven Hill lineup.

WhiskyFest returns this Friday, November 5, in Chicago, where some tickets are still available; the event will travel to New York City on November 11, ahead of a final stop in San Francisco on December 3.