From the base of New Hampshire's White Mountains to the forgotten remnants of eastern North Carolina's tobacco trade, a new generation of rural distilleries has popped up along the Eastern Seaboard, farming pastoral landscapes and reinvigorating small towns thirsty for an economic boost. Entrepreneurial spirits, from a visionary advertising executive to a longtime car parts salesman, have found in whiskey a means to improve their neighbors' quality of life while attracting visitors looking to take a scenic getaway, drink in the local flavor, then depart with irreplaceable bottles and memories.

Last fall, Tamworth Distillery & Mercantile CEO and founder Steven Grasse tapped the maple trees shading an unmarked Revolutionary War graveyard near the front gate of his summer residence. The syrup from these trees is the skeleton key that opens up his maple-flavored Graverobber Unholy rye whiskey. Tamworth's William Whipple straight winter wheat is a recent limited release, with a mashbill including organic hard red wheat, roasted chocolate wheat, and toasted caramel wheat. Its Eau De Musc is a 2-plus year old bourbon infused with the fruit-leather funk of the extract from North American beaver glands. Grasse tasked distillers Jamie Oakes and Matt Power to channel the natural resources of the White Mountains into Tamworth Distillery's spirits and, ultimately, revive the blink-and-you'll-miss-it main street of Tamworth in an effort to reconnect with family roots as old as those maple trees. 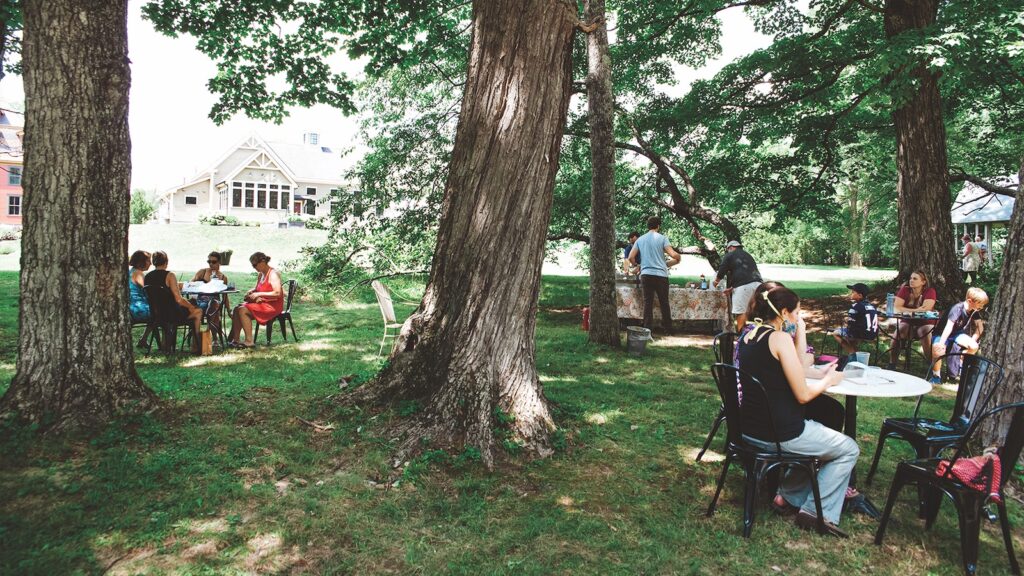 Tamworth Distillery in New Hampshire fuses the terroir of the White Mountains with a bit of New England eccentricity.

Prior to starting Tamworth, the Philadelphia ad man conceived Sailor Jerry rum and Hendrick's gin, along with launching Art in the Age, a collection of herbaceous aperitifs inspired by flavors of his paternal Pennsylvania German ancestry. In another nod to his heritage, he purchased a Tamworth estate 20 miles north of Meredith, New Hampshire, where his mother's family settled more than a century before the Revolutionary War, which was a popular overnight stop for Henry David Thoreau (in July of 2021, Tamworth released a corn whiskey honoring Thoreau). Grasse breathed new life into a panorama of dilapidated architecture. First he restored the Tamworth Lyceum, an 1826 general store that's now Art in the Age Cafe, serving fried eggs and collard greens over distillers' cornbread made from spent grains. Then came the distillery, occupying the grounds of the former Tamworth Inn, with a bed and breakfast in the works next door.

“Eventually I want to see New Hampshire be as enlightened as the state of New York, where farm distillers can sell at farmers markets,” Grasse says.

If you go: “For those ‘On Golden Pond' vibes, visit the Squam Lake Inn in Holderness,” Grasse says. “They make lovely garden cocktails using our spirits and herbs from their garden, and all their food is locally sourced.”

“It's on the same piece of limestone,” says John Little, Smooth Ambler CEO and master distiller, but he is still surprised by visitors who expect less of West Virginia than neighboring Kentucky, which boasts of its limestone-laced water. “They think of moonshine and picture us smoking corncob pipes in the corner,” he says. Instead, Smooth Ambler's Maxwelton distillery offers a modern interpretation of Appalachian craft and hospitality. Little moved to West Virginia about a decade ago and set up shop with his father-in-law, TAG Galyean, leaving behind a life selling brake pads in his native North Carolina. Here he discovered the most progressive small town in the surrounding Allegheny Mountains, a hidden gem on the Greenbrier River. The charm of the region shows itself in seasonal distillery-only releases, like bourbon finished in local Hawk Knob cider barrels that capture the essence of autumn. “Not only can you taste the apples, you can nose them,” Little says.

The General Lewis Inn offers accommodations and pours Smooth Ambler's Old Scout in the Thistle Lounge. It's the hotel of choice during the Drambleree, an annual gathering of the Smooth Dramblers, an invite-only Facebook group of Smooth Ambler superfans. When Little and the Smooth Ambler team discovered the group, they decided to welcome them each year with a weekend of whitewater rafting, clay shooting, and bluegrass, while also showcasing nearby Lewisburg's finer dining. Most popular is the annual barrel pick: “On Friday they sample product, pick a custom barrel, and by noon Saturday they can buy a bottle,” Little Says.

If you go: To experience calmer waters than the local rapids, book your stay at The Greenbrier, a luxury spa resort that dates back to 1778. Guests arrive to revive in its sulfur spring waters, preferably between a day of golf and a night at the hotel's guests-only casino. 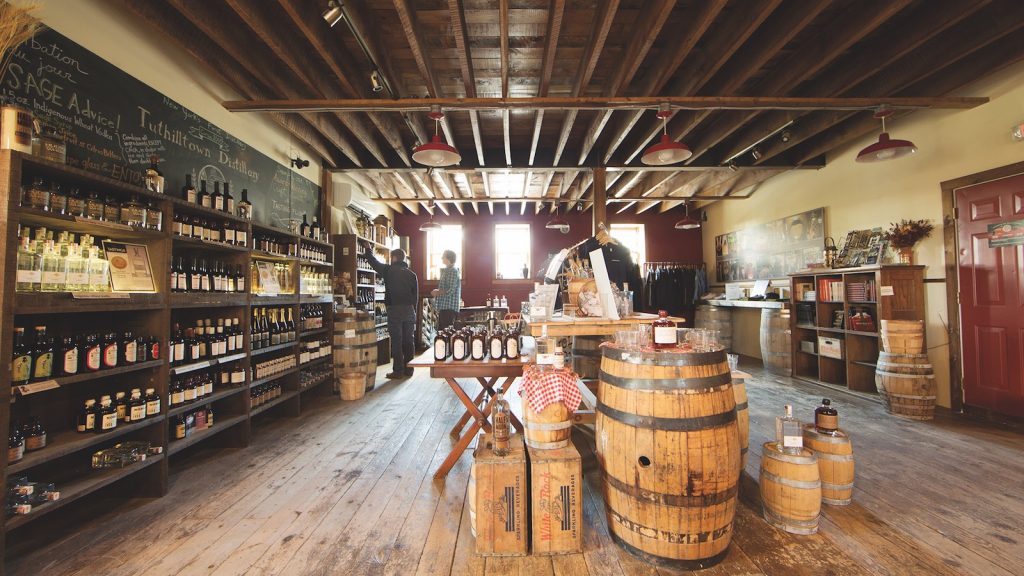 The tasting room at Tuthilltown Spirits in Gardiner, New York.

Tuthilltown Spirits, an hour north of Manhattan on the edge of the Shawangunk Mountains in the Hudson Valley, was the first whiskey distillery in New York since Prohibition when it opened in 2003. When a distillery license became available, Ralph Erenzo decided to convert a vacant mill granary on his land into a distillery. It was a far cry from the rock climbing retreat he had originally imagined. Erenzo and Tuthilltown Spirits co-founder Brian Lee began by distilling local apples into vodka, and later aged the first batch of Hudson Baby bourbon. In 2017, the brand was acquired by William Grant & Sons, which today owns the Tuthilltown distillery and all of its products, putting the town of Gardiner on the map, as nearby farms follow Tuthilltown's example in showcasing the Hudson Valley's bounty and beauty.

Tuthilltown offers a range of whiskeys for sale at the distillery-from single malt to a rye finished in barrels that previously held Hudson whiskey, then Vermont maple syrup. The Gardiner Liquid Mercantile, a bar, restaurant, and bottle shop stocked with spirits from farms within the region was run by Hudson's former chief distiller Gable Erenzo, who sadly passed in April 2021.

If you go: While you can't camp on Tuthilltown grounds, you can stargaze overnight at Minnewaska Lodge, ten minutes away on the edge of the Minnewaska State Park.

Mother Earth Spirits embodies the essence of Kinston, where co-founders Stephen Hill, chairman, and Trent Mooring, president, had the notion of giving folks a reason to come a little early and stay a little longer. At the end of the 20th century, the town's status as the seat of eastern North Carolina's tobacco trade had diminished, as had local factory jobs. However, Kinston became the unlikely destination for culinary travelers from all over the world, drawn to dine at Chef & the Farmer restaurant, where homegrown chef Vivian Howard of the PBS series “A Chef's Life” championed progressive farm cooking. Hill got the idea to give those diners a room where they could spend the night and a reason to stay and explore, spawning Civil War exhibits, a minor league baseball team, and a growing collection of public artworks. 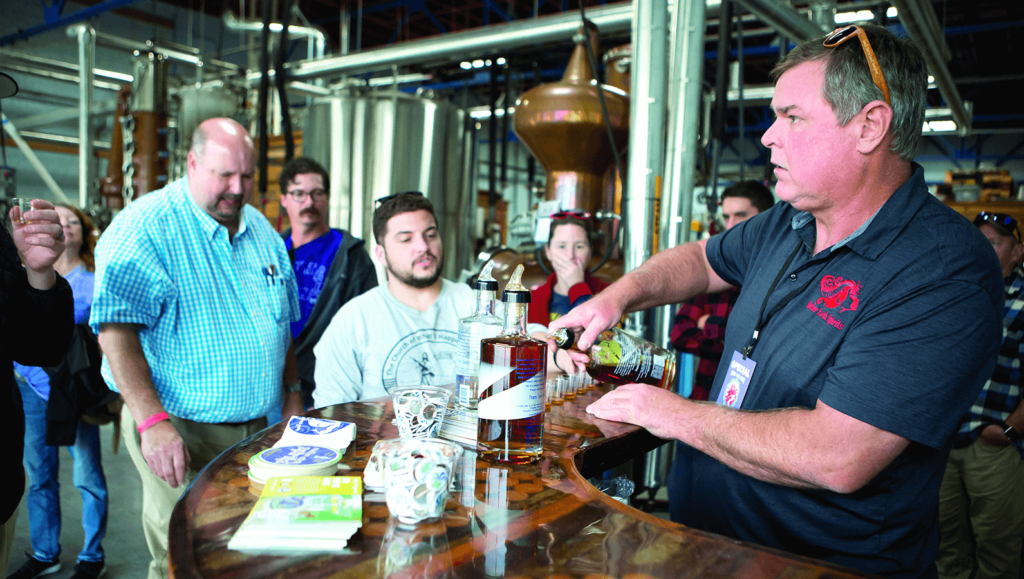 In Kinston, North Carolina, Mother Earth Spirits gives visitors of the town plenty of reasons to extend their stay.

“You can't just build houses and hope they fill up, you've got to give people something to do,” says Hill, who cut his teeth in the construction business. His two hotels include the budget-friendly mid-century Mother Earth Motor Lodge and The O'Neil, a luxury hotel just a short walk from Mother Earth Brewing's taproom. Here, locals and visitors join over a glass of Silent Night, an imperial stout aged in the distillery's bourbon barrels, or Homegrown, a blend of fresh local tomato juice and beer that's a Hill family staple. Mother Earth Spirits' whiskey can be sampled after a distillery tour and purchased by the bottle, or in cocktails at select local restaurants.

If you go: Take a distillery tour and visit the brewery, where you can ride the slide rescued from Hill's and Mooring's favorite childhood park. The next morning, have breakfast at Lovick's Cafe, where factory workers have started their shifts with pre-dawn dough burgers since the Depression.
Distillations Dispatches Fall 2020 Travel arobb