Bugs Could Pose a Major Threat to Your Favorite Whiskey

Whiskey warehouses are susceptible to sundry forms of calamity. Battered by the elements, they can collapse, catch fire, be struck by lightning or torn apart by tornadoes. Several warehouse mishaps in 2018 and 2019 prompted the bourbon industry to look into ways to prevent similar disasters from happening in the future. Bourbon warehouses—often called rickhouses or rackhouses—are typically constructed of large wooden support poles, with horizontal storage racks, or ricks, stacked several high, and are sheathed with corrugated tin metal. With age, these buildings grow increasingly vulnerable to damage from severe weather and other threats—including pests.

A recent study by pest management company McCloud Services, which works with distillers across Kentucky, explains the importance of assessing and mitigating insect damage in warehouses. “While never proven as the root cause for collapses, [wood-destroying insects] should be managed to decrease structural integrity degradation of rickhouses,” the report states, noting that semi-annual inspections “can potentially reduce rickhouse collapses.” 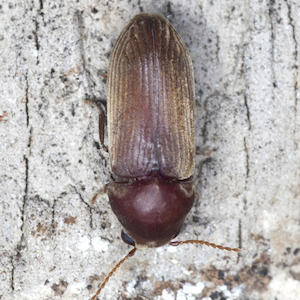 Aging rickhouses are particularly susceptible to damage from powderpost beetles, which feed on old wood. (Photo courtesy of McCloud Services)

The problem of wood-destroying insects, such as anobiid powderpost beetles, roundheaded borers, and subterranean termites, rarely seems urgent. “None of these insects will cause significant damage overnight,” McCloud technical director Patricia Hottel tells Whisky Advocate. “It takes time for the feeding damage to progress, and each pest group will have certain preferred environmental conditions, which will increase survival and the potential for damage. Humidity, moisture content of the wood, and temperature are key.” For example, optimum temperatures for anobiid beetles fall in the 60-75 degree Fahrenheit range, whereas old house borers are better off at around 82 degrees Fahrenheit. The rickhouse's age also plays a role; powderpost beetles—which Hottel notes “have most commonly been implicated with structural damage to rickhouses”—prefer to feed on older wood. She recommends that distilleries inspect each rickhouse individually, as one site may provide more amenable conditions for pests than another.

Some distilleries are heading off potential insect problems by building new rickhouses from non-wood materials, such as concrete—though Hottel advises constructing walls from poured concrete, rather than hollow concrete blocks, which, “from a pest standpoint, can have some disadvantages,” as the void makes it easier for insects to invade. Steel is also an option, making buildings safer from both pests and fires. Colorado's Breckenridge Distillery constructed its newest warehouse from steel rather than wood as part of a multi-million-dollar expansion in 2019.

Heaven Hillalso is in expansion mode, actively building new wooden warehouses bothat its home base in Bardstown and in Cox's Creek, Kentucky. Mitigating and preventing insect-related risk is constantly on the mind of master distiller Conor O'Driscoll. “The powderpost beetle is a known concern throughout the industry, and throughout wooden structures everywhere,” O'Driscoll says. “As we're building new warehouses, and replacing old ones, we're building them very conscious of the life cycle of the beetle.” 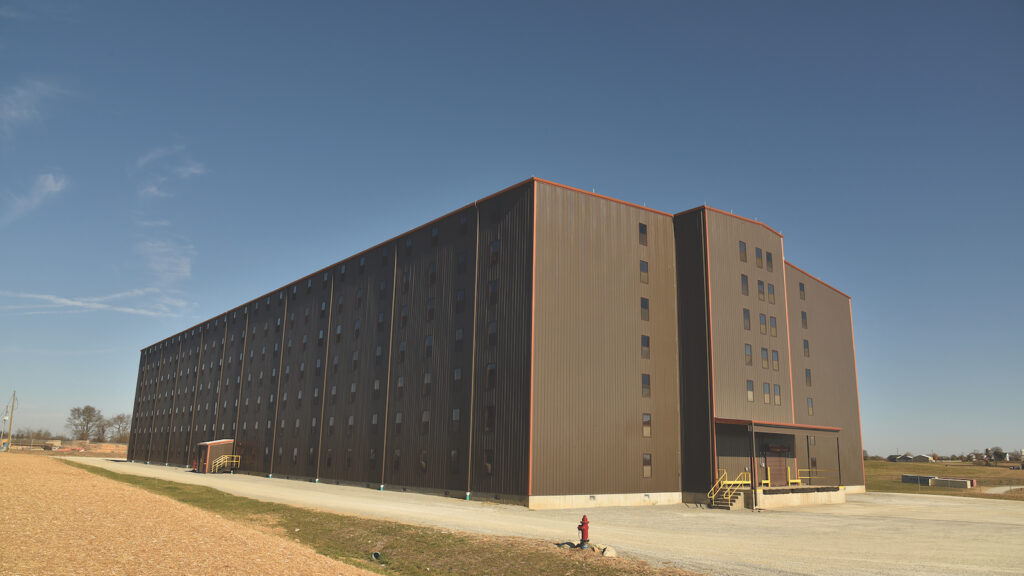 Powderpost beetles are a persistent pest in warehouses like the ones Heaven Hill is building in Cox's Creek, Kentucky (pictured), but can be avoided altogether by keeping the moisture level of the wood low enough so that the beetle can't survive. (Photo courtesy of Heaven Hill Distillery)

The problem can be avoided altogether by keeping the moisture level of the wood low enough so that the beetle can't survive; O'Driscoll says Heaven Hill's warehouses are being built with lumber that's well-dried. “More importantly, we're designing and building to ensure proper drainage, so that when it rains, water doesn't accumulate, soak into the wood, allow moisture to build up, and make it attractive to the beetle,” he adds.

Ample airflow within the warehouses is crucial too. “Obviously, we're already designing the warehouses for that—to give us the conditions that we want to mature our whiskeys,” O'Driscoll explains. “Good airflow is important for the angels' share, and [to ensure] the proper temperature changes from the bottom to the top. So when you build a structure appropriately of the right materials, and then make sure that you've got good airflow, you prevent the conditions for the powderpost beetle to survive. It just doesn't have a home to live in, and they're not an issue.”

Older Warehouses Most At Risk

O'Driscoll suspects that at some other distilleries, neglect of older warehouses could be what's making them vulnerable to insects and other risks. “As the industry has gone through this boom for the last 10 or 15 years, there were warehouses that were sitting idle for a long time that may not have been maintained, and I think that's where some of the issues probably started,” he says. “But luckily, our warehouses were in use and we were maintaining them, and if there was a piece of worn dunnage [wooden beams and posts] in there, we could replace it before it became an issue.”

For existing wooden warehouses, Hottel says pesticidal treatments, including some borate-based products like Tim-bor and Bora-Care, can be used as both remedial and preventative measures. If there's already an infestation but it's limited to a small area, removal and replacement of the wood may be an option. “Additionally, increasing ventilation to reduce moisture and humidity would be a viable, non-chemical control method, and is commonly advised as a preventative strategy,” Hottel says.

While the COVID-19 pandemic forced distilleries to shut down visitor centers—and in some cases scale back or even suspend operations—for the most part, pest management hasn't paused. “Because pest management is considered an essential service, most of our work has continued as scheduled,” Hottel says. “Protecting a facility from pests is not something you'd want to postpone.”
Insights Bourbon News zkostro Heaven Hill Warehouses