Chefs, Celebrities, and Bartenders Give Whisky Making a Whirl

Tattersall Distilling is one of the more adventurous craft distilleries. The Minneapolis-based company produces barrel-aged gin, blackstrap rum, aquavit, amaro, absinthe, and, of course, whiskey. But even among dozens of products, a high-proof single malt with distinctive barbecue notes from the mesquite and apple-smoked malt along with dark-roasted chocolate malt stands apart. Tattersall Signature Series single malt whiskey is the result of an unlikely collaboration with local chef Justin Sutherland, most known for competing on Bravo's Top Chef. Sutherland thought it would be perfect to serve alongside the food at his meat-heavy restaurants like the pig-centric Handsome Hog and steakhouse Fire & Whiskey. 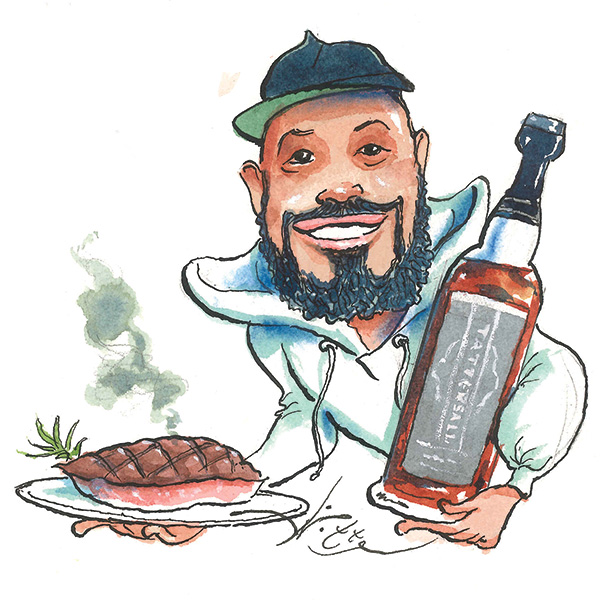 In fact, more distillers seem to be reaching outside their internal ranks for ideas, whether that means enlisting the opinions of chefs and bartenders, or merely diehard whisky lovers. It's a sea change of sorts considering that for so long whisky distillers and blenders operated as solo artists. They created and blended the whisky, and you often liked it that way. (They were, of course, the “master.”) But recently many whisky companies have started to consider the value of fresh perspectives.

A Circle of New Ideas

When John Glaser, founder of Compass Box Whisky, decided to hold a global cocktail competition called The Circle, he was looking not only for a great mixologist, but also for a potential whisky maker. “We hoped to bring together like-minded creative people who are not afraid to think differently, want to be inspired, and want to inspire,” Glaser says. More bluntly, he wanted the winning bartender to blend a completely new whisky with him.

The first winner of The Circle program was Rosey Mitchell, a bartender at London's Three Sheets. According to Glaser, she showed the most creative thinking in making cocktails during the competition and he admired her thoughts on what an inventive whisky blend might taste like.

“Like Picasso said, ‘I begin with an idea and then it becomes something else,'” explains Glaser, who says that Mitchell was able to “help us to explore new territories.” 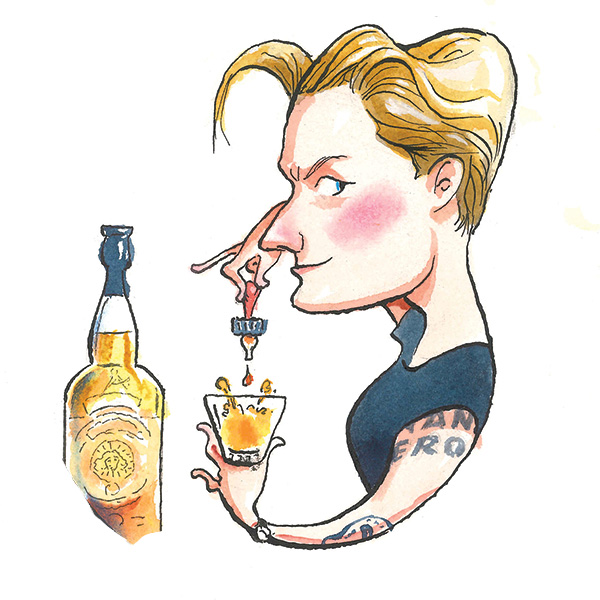 Bartender Rosey Mitchell was the first winner of Compass Box's The Circle program, which seeks ideas for new blends from bartenders. (Illustration by Michael Witte)

Mitchell dreamed of making a daytime whisky that tasted like “sunshine.” Aided by Glaser and lead whisky maker Jill Boyd, Mitchell started with a base of Tamdhu single malt and bolstered it with a Clynelish single malt from a refill sherry butt, a lightly peated Orkney malt, and a dash of a French oak-finished blended malt. A little more than 6,000 bottles of this whisky, also named The Circle, were released worldwide in the summer of 2019; it scored 86 points in Whisky Advocate's Fall 2019 issue. It was unquestionably a unique divergence for Compass Box.

“This was about inviting another person onto our team, someone with a different perspective,” adds Glaser, who is already at work on the second edition of The Circle. “We like to work with creative people, and bartenders are fantastically creative. I think it's kind of like bands working with guest musicians.”

Compass Box certainly isn't the only company letting outsiders sit in on a jam session. In 2016, Beam Suntory's Auchentoshan invited twelve winning bartenders of their bitters blending competition to the Lowland distillery just outside Glasgow. Dubbed the “New Malt Order,” they were primed with technical and laboratory sessions as well as what the distillery calls “sensual experiments” and even “personality pairings” with certain whisky casks.

“These bartenders are the people on the ground, chatting to customers every day, learning their tastes and preferences while gaining invaluable insight into how they can tweak and change drinks to fit wider consumer needs,” says Beam Suntory global marketing manager Alexis Amitrano.

Eventually, each bartender was given the opportunity to blend their own batch of Auchentoshan. Working with then-master blender Rachel Barrie, the group used whiskies of a variety of ages and casks, including Laphroaig, rum, German and American oak, and red wine barriques. Each of the twelve individual whisky blends were then blended together into this final whisky, the Bartender's Malt, which was released in the fall of 2017. 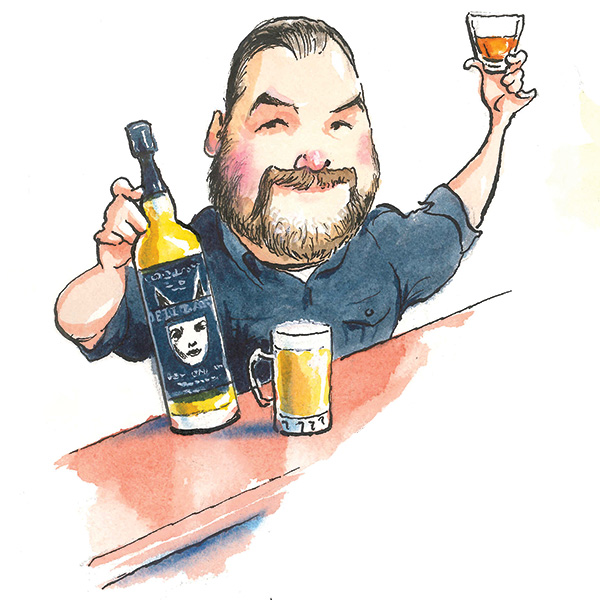 Of course, not all these “consultant” whiskies are intended for a global audience. In 2013, Compass Box partnered with Mike Miller, owner of Chicago's esteemed whisky bar Delilah's, to create a whisky for the bar's 20th anniversary. Miller's goal was to craft a whisky that could be served as a shot alongside a cheap beer at his rock 'n' roll dive in the Lincoln Park neighborhood. “This wasn't a brief we had given ourselves in the past,” Glaser says of creating a shot-and-a-beer whisky. “So it did break new ground for Compass Box.”

Whisky Advocate's review called it “soft but gutsy,” and a “departure for Compass Box, but a healthy one.” Both men enjoyed the result so much that for Delilah's 25thanniversary they repeated the task.

On the other end of the nightlife spectrum, Glaser recently partnered with Ryan “Mr. Lyan” Chetiyawardana, the visionary owner behind several of London's high-end cocktail bars. Compass Box X Lyaness is a blend of Great King Street Artist's Blend, Great King Street New York Blend, and Orangerie, a scotch infused with hand-zested Navalino orange peel, Indonesia cassia bark, and Sri Lankan cloves. It's only available at Chetiyawardana's bar Lyaness; Chetiyawardana saw the highly concentrated flavor as something he could easily use in Old Fashioned-style cocktails.

“John has been an old friend and one whom I saw a very mirrored ideology in,” Chetiyawardana explains. “I wanted to have something that challenged what whisky was to many drinkers, but to also reflect what whisky could be—so we made something that wasn't a whisky!”

From Chef to Celebrity

Besides Sutherland, other chefs are getting in on the whisky action as well, most notably legendary chef Massimo Bottura who partnered with Dalmore to craft a single bottle of L'Anima 49 year old. Though Bottura and master blender Richard Paterson claim the whisky offers “Italian flavors”—notably blood oranges—reminiscent of the chef's Michelin-starred Osteria Francescana, few will even know if it fulfills the promise: The bottle sold for $140,000 at auction.

Still, you say, these collaborations don't seem that “out there.” A bartender is tangentially a part of the whisky industry and chefs have extraordinary palates. It's not hard to believe he or she might have the prowess to produce a quality pour. But what about a celebrity?

“He said, ‘I'd love to make my perfect bourbon,'” Wild Turkey's Eddie Russell famously recalled of Matthew McConaughey. “And I said, ‘You can't make any, but I'll definitely involve you in the tasting of it.'” 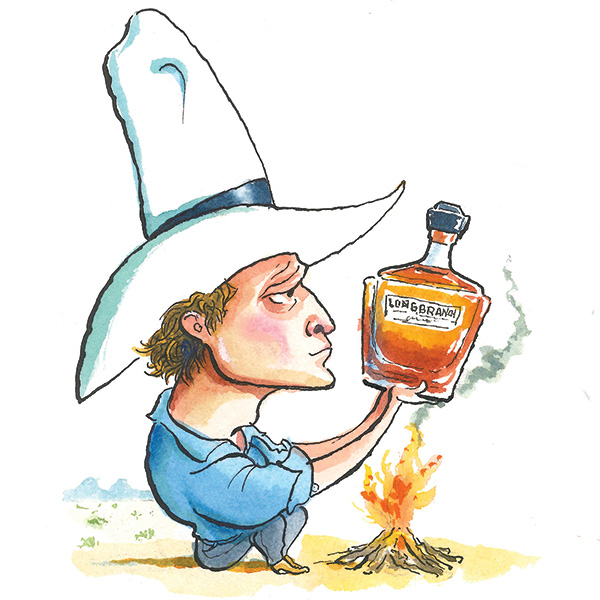 McConaughey's 2016 partnership with Wild Turkey as creative director was undeniably successful in terms of marketing: Following his appearances in Wild Turkey commercials, global sales grew by15%. But McConaughey wanted to be more than the face of a brand and put his personality into a product, eventually suggesting they filter bourbon using mesquite wood—something that reminded the actor of drinking whiskey by the campfire in his native Texas.

“I actually thought it was a pretty good idea,” Russell commented upon the release of Wild Turkey Longbranch, an 8 year old bourbon filtered through mesquite charcoal. “[The process] imparts some citrusy flavors and, of course, a little smoke.”

In the canon of Wild Turkey shaped by Eddie Russell and his father Jimmy before him, Longbranch is an anomaly. It has likewise sold well and seems like it's here to stay, suggesting that perhaps opening up ideation to outsiders isn't the worst idea.

A Dram Worth Voting For

Rather than consulting a bartender or celebrity, Buffalo Trace elected to let whiskey fans create what they want. The distillery's first foray into this concept was via its Single Oak Project, through which it released 192 different experimental bottlings over four years.

In 2015, consumers were allowed to pick their favorite and, after nearly 6,000 votes, Single Oak Bourbon No. 80 was chosen. The high-rye expression uses a barrel with staves air-dried for 12 months, then aged for 8 years, meaning it won't be ready until 2025.

Buffalo Trace's next foray into crowd-sourced bourbon debuted in November 2015, with its interactive Craft Your Perfect Bourbon (C.Y.P.B.) web page allowing users to pick their preferred bourbon mashbill (wheat or rye secondary grains), char level (up to 55 seconds worth of barrel scorching), proof (80 to 140), age (up to 23 years), and even warehouse placement (from the bottom of the rickhouse all the way up to the top). By 2017, over 100,000 people had gone through the online process. 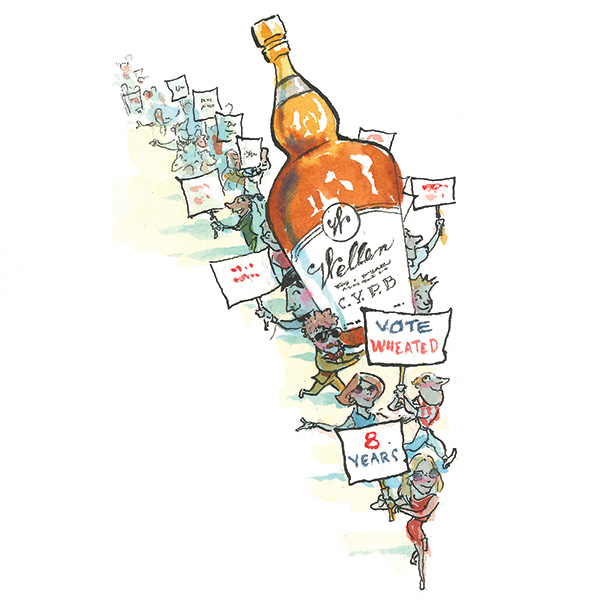 To create W.L. Weller C.Y.P.B., Buffalo Trace sought help from hundreds of thousands of whiskey lovers by allowing them to vote on the mashbill online. (Illustration by Michael Witte)

“When we looked at the results, we were shocked that so many fans were designing the same whiskey”—a wheated bourbon (just like Weller and Van Winkle), aged 8 years on top warehouse floors—explains Kris Comstock, Sazerac's senior marketing director for bourbons. This was simply meant to be an educational exercise. “We never imagined this would result in a new product, and that was not our original intent, but we felt compelled to bottle this ‘crowd-sourced' bourbon designed by fans.”

Even without a full understanding of how char level and warehouse placement can influence a whiskey's flavor, Buffalo Trace fans certainly had the odds in their favor when it came to crafting a “perfect” bourbon. After all, master distiller Harlen Wheatley and his team have produced gem after gem for the last decade, and perhaps not surprisingly, W.L. Weller C.Y.P.B. was an immediate hit; massively embraced by bourbon geeks, it quickly exceeded its $39.99 suggested retail price on the secondary market. It's now become an anticipated annual release.

Taking the “customer knows best” ethos to the extreme, however, gets you Maker's Mark Private Select. The single barrel program allows consumers to finish cask-strength bourbon with five different bespoke staves; in theory, 1,001 unique bourbons can be created. There's a reason the program's motto is literally “Make your own Maker's.” Though Jane Bowie, Maker's director of Private Select, heritage, and diplomat programs, says it's pretty much impossible for the customer to screw up.

As if these amateur whisky blenders weren't unsettling enough for the industry masters, they now have to contend with computers that threaten their job security. Swedish distillery Mackmyra enlisted artificial intelligence to design a new whisky due for release this year. The program, created by Microsoft and the Finnish company Fourkind, can sort through over 70 million different malting, distillation, and maturation combinations to identify which have been most successful from a sales and customer preference standpoint. Jarno Kartela, machine learning partner at Fourkind, explains, “Although lacking human expertise, we can teach machines to understand what elements previous recipes and products are made of and how they are perceived and ranked by customers and experts.”

5 Whiskies Made by Atypical Creators