Inside the Complex Process of Triple-Distillation

Distillation: It's what separates whisky from beer. The process works because alcohol boils at a lower temperature than water. Apply heat to a solution of alcohol and water, and you can cause the alcohol vapor to rise off the liquid, cool the vapor to condense it into liquid once again, and arrive at a much more potent product than you started with.

Whether speaking legally or practically, two distillations are generally the minimum required to make whisky using pot stills. But some distillers choose to add a third distillation, a more complex process which produces a distinctive spirit with different flavors and characteristics. Triple-distillation is closely associated with Irish whiskey, however it's neither a whisky style exclusive to the Irish, nor a requirement for making whiskey in Ireland. Triple-distillation has passionate supporters all over the world.

Distillation is really a process of refinement, so triple-distillation represents one more level, resulting in a distinct style of whisky. It can be fickle, baffling, enigmatic, sophisticated, expensive, and labor intensive. For those with a thirst for knowledge, it's time to take a second, if not third look at the rarefied spirit that emanates from this copper trinity.

Everything You Need to Know About Triple-Distilled Whisky

The skill required to triple-distill is akin to juggling while riding a unicycle: Your balance is at risk if you lose your rhythm. This is partly because the full portion of liquid flowing from the still isn't destined for the barrel. The distiller keeps only a select cut in their pursuit of the most desirable flavor characteristics. This optimal liquid comes from the center of the run as it emerges, with the first liquid (or foreshots) and final liquid (or feints) rejected.

But just because the foreshots and feints did not make the final cut from a third distillation doesn't mean they are lost forever. Instead they are returned to the second still to be distilled once again, adding a mesmerizing ebb and flow as the spirit takes shape—two steps forward, one step back.

The quality and volume of the recycled feints fed back into the system are essential to maintaining harmony across the whole process. “If those feints go off kilter, it can affect not just this distillation, but it can take four to six distillations to get it back in line again,” warns master distiller Brian Nation, who supervises production for Jameson, Midleton, Redbreast, Powers, and more at Ireland's Midleton Distillery, which utilizes a trio of stills for each distillation.

“Triple distillation gives you flexibility,” Nation says. By varying his cuts across the stills and changing the amount of spirit he keeps or returns to the still, he is able to produce three different styles of pot still spirit, designated light, medium, and heavy.

For Woodford Reserve, triple-distillation is about quality, history, and tradition. After all, the site was one of the last pot still distilleries in Kentucky prior to Prohibition. Morris spent time at single malt scotch distilleries Talisker and Oban, learning the ropes of double-distillation, but when he moved to Woodford, it was his first time working with three stills.

That's not the only hurdle Morris faced. Because pot stills operate on a single-batch process, Scottish and Irish distilleries usually fill their first still with a fermented alcohol liquid—or wash—that has been strained through the mash tun, which makes cleaning out the still for the next batch much easier. Not so at Woodford. “We wanted to distill a traditional Kentucky bourbon mash, or beer, so our still process was going to have lots of heavy grain matter in it: the corn, the rye, and the malt,” explains Morris.

Rather than a flat bottom, Woodford Reserve's primary still (or beer still) has a conical bottom to facilitate the draining of the spent beer. “It's really not distilled in terms of flavor profile, it's simply getting us the liquid that we can work with for flavor formation,” explains Morris. The original beer still built in Scotland by Forsyths did the hardest work and has since been replaced with one from Kentucky's Vendome. “The grain material is abrasive and scours the still,” says Morris. “It had to put up with a very hostile environment and it wore out.”

From the beer still, the low wines (distillate that lacks sufficient alcohol by volume to produce whiskey and therefore requires additional distillation) pass through two identical, smaller, traditional flat-bottomed pot stills with a capacity of around 1,600 gallons. “We don't cut the foreshots from our second distillation because they have a lot of delicate floral and fruit notes,” says Morris. He returns the feints back to the beer still to be redistilled as his cut moves on to the third still. “Now we need to separate the foreshots and feints from the heart of the run,” he continues. “Triple-distillation gives us the ability to make some very fine spirit in pot stills in Kentucky, as we're precisely targeting a cut that will allow those wonderful floral notes in Woodford Reserve to go forward in the heart of the run.”

Triple pot still distillation gives Morris creative control, but is much more time consuming and labor intensive than the alternative of using a column still, which operates continuously, making it the most popular choice for bourbon production. “Certainly, you don't gain efficiencies; your costs go up,” Morris says. “I believe we have the ability to get really complex flavors because we're customizing the cuts. Put me on record because Brown-Forman has column stills, and of course, column stills make an excellent whiskey, but we're able to capture some of those really special low boilers, those floral and fruit notes that otherwise would be sacrificed for the greater good of higher volume.” According to Morris, his small batch triple-distilled whiskey costs the company twice as much as the same amount of spirit produced on continuous stills at their other distilleries.

Morris applies the same triple-distillation process used to make Woodford's well-known bourbon to produce its rye and malt whiskeys. His principle is to keep everything the same when running an experimental batch, from the yeast and water to the fermentation periods, and let the triple-distillation emphasize the difference. The core Woodford Reserve bottlings—the Distiller's Select Straight Bourbon, Barrel Finish Select Double Oaked, and Distiller's Select Rye—all contain column still whiskey as well as the triple-distilled pot still whiskey made at the Brown-Forman Distillery in Louisville according to Morris's specifications, but you can taste 100% triple-distilled pot still whiskey in the Distillery's Master's Collection and some of the distillery-only bottlings.

Close Encounters of the Third Still

Single malt Scotch whisky must be distilled at least twice according to law, but nothing prohibits more distillations. Auchentoshan is among a handful of single malts produced using a third. Having previously worked with this process at Auchentoshan, Glen Moray, and Glenmorangie during earlier phases of her career, Rachel Barrie, master blender for BenRiach, is arguably the most experienced master blender of triple-distilled scotches working today. Barrie recalls the '90s as a very experimental decade for Scotch whisky. “More people were discovering malts, and it was thought that there might be a need for whiskies that [were] lighter in style,” she says.

BenRiach operates two pairs of stills that are clearly designed for double distillation, but they don't let that deter them. In 2007, BenRiach reintroduced triple distillation by distilling twice through the final still, also known as the spirit still. The distillery team dedicates a week's production to triple-distillation every year, and last year they launched BenRiach 10 year old Triple Distilled in Travel Retail.

As master blender, Barrie's priority is maximizing the flavors in the finished whisky, and she acknowledges candidly that there are trade-offs with triple-distilled scotch. Certain flavors shine because other competing flavors have been removed in triple-distilling. For example, the husk of the barley yields terpene oils that deliver clean citrus flavors. These are readily alcohol soluble, so the high-strength triple-distilled BenRiach spirit that comes off the still at 79% ABV reaps more of these flavors than the double distilled does when emerging at 69% ABV. “You really concentrate up the citrus flavors relative to all other flavors because they love the higher strength,” explains Barrie.

The inverse is true for heavy, oily, and spicy flavors, which have a greater affinity for water than alcohol and are therefore reduced with triple-distillation. “For consumers coming from gin or bourbon and not used to a decent malt, it's probably easier to drink because it's light and effortless in some ways,” says Barrie. “Double-distillation has got more character in terms of the wholesome nature of the malt.”

Barrie concedes that whether looking to Ireland or Scotland, triple-distilled whiskies are more similar to each other than double-distilled. “There's definitely less diversity in triple-distillation,” she says. “Triple-distilled whisky is smooth, easy to drink, and flows over your tongue, but it does have less of a finish. As soon as you reduce character to a certain degree by triple-distillation, there are fewer differences; that's arguably why Irish whiskeys are more similar to each other.” The more polished, refined spirit is associated with a smoother taste. That smoothness can lend itself to simple and refreshing cocktails like a Highball, where the whisky is left to shine. “It's more refreshing because you get more of that mouth-watering citrus along with the creaminess of the malt,” Barrie notes.

Discover Triple-Distilled Whisky With These 9 Bottles 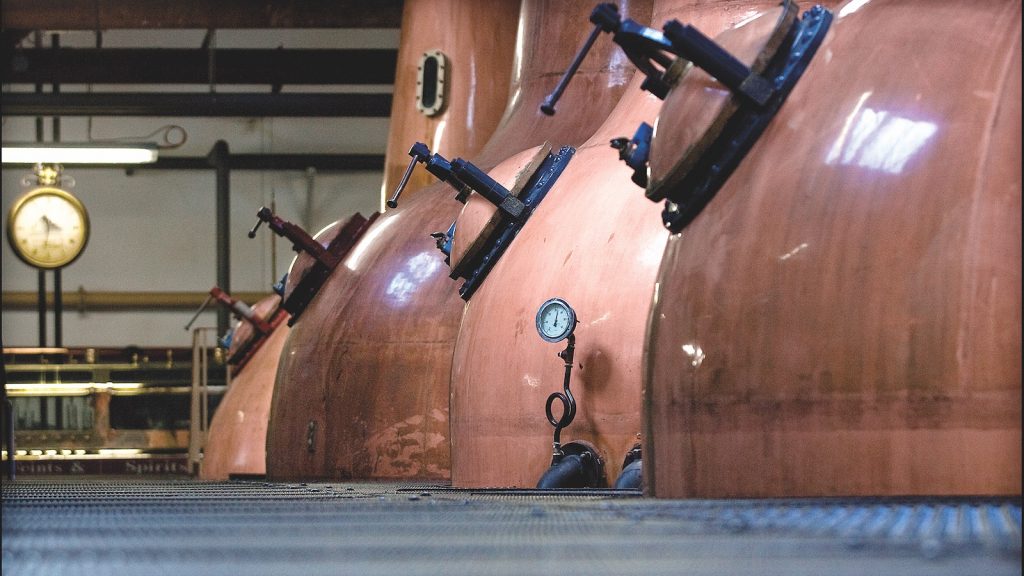 BenRiach has two pairs of stills to aid in the triple-distillation process.

The triple-distilled BenRiach is filled into cask at higher strength, bringing out more alcohol-soluble components from the wood including even more terpenes, which enhance the orange notes, as well as vanilla and a little bit of oak spice. When mature, it is transferred into Pedro Ximénez casks, where it takes on syrupy molasses characteristics, candied fruit sweetness, sultana, and more orange flavors. “This amplifies the style that you get with triple-distilled,” says Barrie. “It's like a pâtisserie in springtime; it's got layers of lovely citrus fruit and beneath, a lightly baked character from the Pedro Ximénez cask, with syrup sweetness and a little bit of spice on top. The triple-distilled has the creaminess and softness of the barley, and the citrus fruit character is more mouthwatering, refreshing, and sweet at the same time.”

Three is a magic number, and triple-distilled whisky is a pretty magical libation. Its goal may be purification of the spirit, but outside its heartland of Ireland, this style of whisky now transcends the stereotypical whiskies of each country wherever it's made. As more and more distillers experiment, this style makes for an intriguing one for whisky lovers to explore, compare, and discuss. It may look complicated, but fortunately, consuming it is as easy as 1-2-3.