Design and Create Your Own Whiskey at These Distilleries

Distilling your own whiskey at home can end badly—possibly in injury or arrest. But for those interested in crafting a custom dram, including whisky clubs, there is an increasingly available and legal option designed to take you from drinker to distiller. Craft distillers like Foundry Distilling Co. in West Des Moines, Iowa and J. Rieger & Co. in Kansas City, Missouri allow customers to design and execute their own whiskey, from mash to maturation.

“There's a lot of mystique, especially for the vast majority of people, about what it is to make whiskey,” Nathan Perry, head distiller at J. Rieger, says. “So many people don't understand the process. You get to actually do it, be involved, give your input.”

Here's how it works: a distiller will sit down with you to discuss your ideas and flavor preferences. Some distilleries offer only their tried and true proportions of grain, called mashbills, while others will work with you to create your own recipe. Once the details are decided, it is up to the customer how hands-on they want to be.

"Folks that come through and do a private barrel with us, it's more of a graduate level whiskey education. They really get into the weeds on every part of the process and learn," Scott Bush, founder of Foundry Distilling, says of their program, estimating they've had 50 participants in it, calling it one of their main offerings.

Rieger even allows customers to bring in their own grain and adjust the proof during distillation. Perry says he gives the customer as much freedom as they'd like, but remains available to them as an advisor. “I think most people come into this thinking it's going to be a collaboration and want feedback,” he says.

When it comes time to place the distillate into a barrel, most programs stick to a new charred oak barrel, like those required for bourbon or rye, although Perry says he offers anything that Independent Stave Co. in nearby Lebanon, Missouri can provide. From there, it's time to watch and wait. Riegers plan for a 4-year maturation period with yearly taste-tests, though they will extend that window for an additional fee.

According to Matt Witzig, COO at Jos. A Magnus & Co. in Washington D.C., which previously ran a Dream Distiller Experience before discontinuing it to focus more heavily on production, whiskey enthusiasts who choose to distill with him are often looking for next-level insight or aiming to create a liquid legacy for loved ones. “Many of [our customers] have been to other distilleries, they've been on tours, they've done the whole thing,” he says. “But [being] hands-on for the entire process, I think it becomes completely different to them at that point.”

Taylor Ward, a private banker in Prairie Village, Kansas, who laid down three barrels with Rieger in 2017, plans to age his bourbon for 8 to 13 years, and may let one rest for as long as 21 years. He created three different mashbills, all with 60% corn, adjusting the proportions of rye, wheat, and barley for each.

“It's got a ways to go, but I looked at it as a long-term investment, personally,” Ward says. The cost to create your own whiskey is comparable to selecting and purchasing a mature barrel: $7,500 to $15,000. “I'll get some great bottles that I can give as Christmas gifts or just to my family.” Ward says that he may label the whiskey a family reserve and name it after his grandfather, a lieutenant commander in the U.S. Navy.

Andrew Pulliam, a D.C.-based real estate senior vice president, let his fondness for wheated bourbon guide his custom whiskey created at Magnus. He and three friends went in on the barrel, which is now almost 3 years of age. “It's a good exercise in patience,” he says. “But I think it's going to be worth it when we get it at the end.”

For the distillers, helping people create their own custom whiskey is a rewarding experience as well. “For me, this is one of the most exciting things to do,” Perry says. “Getting to do something a little bit different and it doesn't have to fit a specific flavor profile. There aren't constraints.” 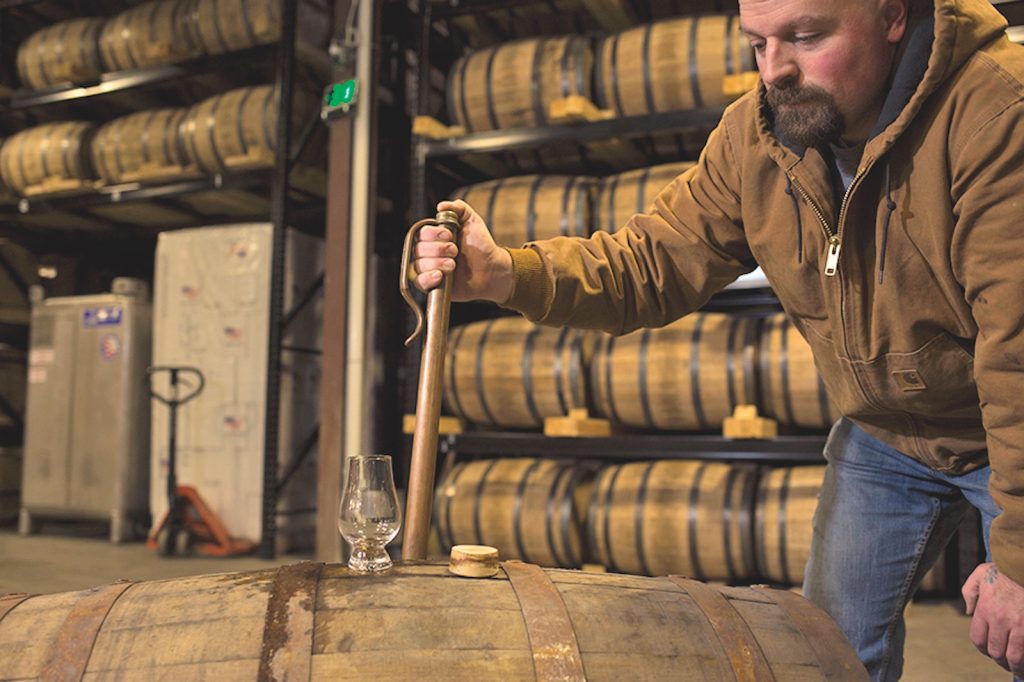 Play Distiller for a Day

From mash to maturation, at these distilleries you can have it your way. A standard barrel will yield approximately 200 750ml bottles of whiskey.

Copper Run Distillery—Walnut Shade, Mo.
Cost: $1,180 to $9,000, depending on barrel size
You can: Design a mashbill; oversee distillation; taste-test every six months.
Aging time: 1 to 3 years

Blinking Owl Distillery—Santa Ana, Calif.
Cost: $8,000 to $15,000
You can: Design a mashbill; participate in distillation; taste-test every six months; keep the barrel.
Aging time: 1 to 3 years