Exclusive: The People Behind This New Whiskey Actually Are Descended from Bootleggers

In the decade or so that American whiskey has been booming, many new brands have popped up claiming roots in Prohibition, whether via a great-great-granddaddy's moonshine recipe or a vague tale about smuggling bottles across the border. Never let the truth get in the way of a good story, they say, and many of these yarns are spurious at best. But there's a new whiskey whose founders actually can prove the veracity of their forebears' criminal liquor enterprise—because they have a presidential pardon for them.

“You don't just snap your fingers upon the repeal of Prohibition and decide to get into the liquor business,” says Marc Taub, president and CEO of Taub Family Cos. and co-founder with his son Jake of Jacob's Pardon American whiskey. The third generation of a family of alcohol distributors, Marc guessed that there was more to the origin story of the business than he knew, but wasn't privy to the details for most of his life. He describes growing up and seeing a metal box in his grandfather's office, next to the bar set. Eight years ago, after his father passed away, Marc opened the box to discover evidence of his grandfather, Martin Taub, and great-uncles' original business: whiskey production. 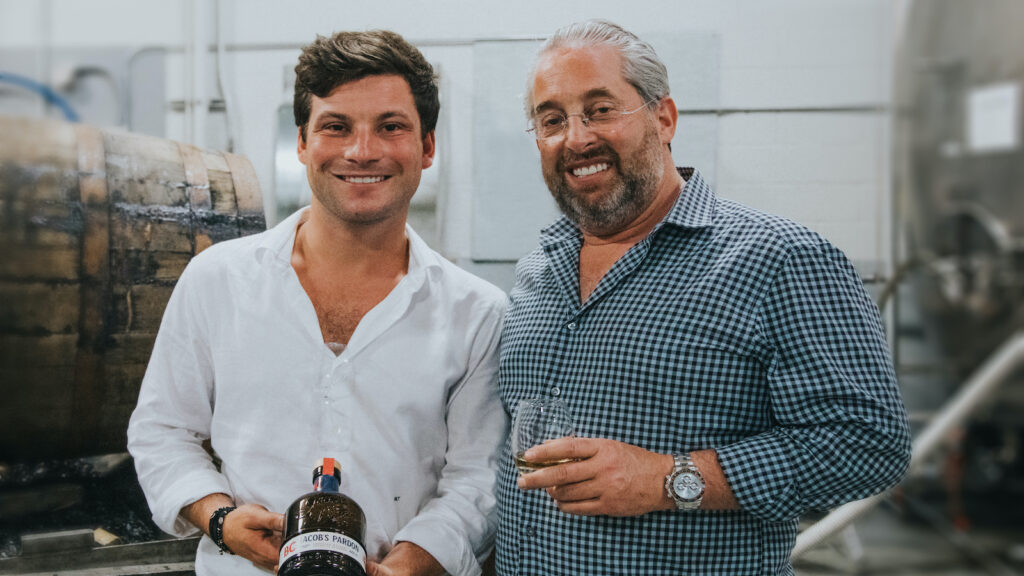 Marc (right) and Jake Taub are coming full circle on their family business with the launch of Jacob's Pardon whiskey.

There were floor plans for a production facility in New Jersey, trademarks for brands like Baltimore Club whiskey, contracts with whiskey distillers, and the most intriguing documents of all: pardons from President Franklin Delano Roosevelt for Abner and Jacob Taub, Marc's great-uncles, who had been convicted in 1930 of transporting barrel scrapings with the intent to use them in flavoring whiskey. “It all came full circle to recognize where the early beginnings [of the family business] were,” Marc says. “It enticed me to want to try and figure out how it all began and pay homage to the beginning, and the retrospective of where the family got into alcohol in the first place—and that was in the rectifying business.”

While Marc always believed that only his uncles had worked in whiskey production, his grandfather was the one who had to obtain the license in 1932, because Abner and Jacob were convicted criminals. And although there's no evidence that Martin had been involved in illegal whiskey production during Prohibition, Marc says, “I'd be hard-pressed to say that he wasn't involved.” 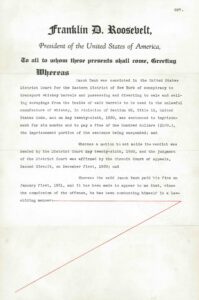 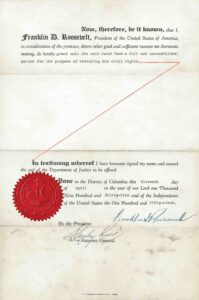 After establishing their business in the early 1930s, the Taub brothers originally marketed a number of whiskeys, led by Baltimore Club, but Marc and Jake decided to launch their whiskey with a distinct new name, nodding to their heritage with a “Baltimore Club” emblem on the label. And they opted to follow in the footsteps of their forebears by choosing to rectify—purchase whiskey made by someone else and then age, finish, blend, and bottle it themselves—rather than open a distillery. It was a deliberate choice to extend the family legacy, and a pragmatic option in today's whiskey landscape.

“Over the years we've seen great companies be able to buy barrels of scotch” and bottle them under their own label, Marc explains. “I thought that was a better approach for us than going the craft route and starting from scratch.” Over the past eight years, the company has amassed around 8,000 of barrels from a number of American whiskey distillers, and has plans to acquire more, especially as the economic fallout from COVID-19 is motivating some producers to sell existing stock.

Jacob's Pardon debuts this month with two 15 year old single-barrel whiskeys, both distilled at MGP from 99% corn and 1% malted barley and aged in used barrels. Because they were initially distilled to above 80% ABV—the minimum distillation proof for light whiskey—these barrel-proof whiskeys have eye-popping ABVs: 69.75% for Barrel No. 37 and 70.9% for Barrel No. 23. Despite the HAZMAT-level alcohol, the whiskeys are remarkably easy-drinking, with a sweet, butterscotch profile. Both are priced at $200, with just 106 bottles of Barrel No. 37 and 169 bottles of Barrel No. 23 available.

The first release of Jacob's Pardon Small Batch is labeled “Recipe No. 1” and combines some of that 15 year old MGP light whiskey with 8 year old whiskey from Tennessee. It's bottled at a gentler proof of 48.6% ABV and, because the Tennessee whiskey was aged in new charred oak barrels, has deeper notes of spice and nuts. There are 14,898 bottles rolling out in this initial batch, which was blended by spirits expert Paul Pacult.

Going forward, the Taubs have plans for a number of different recipes and whiskey styles under the Jacob's Pardon label, always linked back to the original Baltimore Club brand. But they're not in a rush. “To date, we haven't sold bottle one, but we've been at this for eight years, socking away thousands of barrels,” Marc says, emphasizing that getting the quality right comes first. “[We're starting] with aged whiskeys that have definitive character that we can be proud of.”
sbarton New Releases News WA Exclusive Prohibition