Follow the Journey That Scotch Whisky Takes From Barrel to Shelf

Ever wondered how that bottle of scotch found its way to your local liquor store shelf? Both single malts and blends take the transatlantic voyage from Scotland to the U.S., transported in a number of different vessels so that you can enjoy a dram. We break down that journey into four crucial steps.

Scotch distillers store their casks in large warehouses that stretch from the southern counties of Ayrshire and South Lanarkshire all the way up to the Highlands. The biggest scotch whisky producer, Diageo, has its main warehouse in Clackmannanshire (near Edinburgh), which holds over 3.5 million casks. Most bottling plants are located within a 35-mile radius of Glasgow, and that is where the bottled scotch is kept, awaiting its overseas journey. 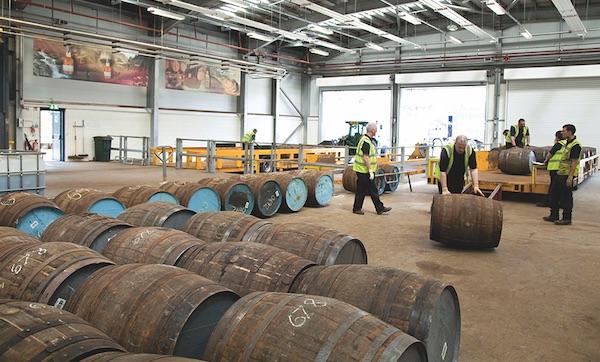 Scotch whisky begins its journey to the States in barrel warehouses, where the casks are dumped and the whisky makes its way to the bottling line.

When it's time to go, logistics companies—usually Malcolm Group or Russell Group, which dominate that business in Scotland—drive the bottled scotch to port. The U.S.-bound whisky usually sails from Greenock Ocean Terminal, west of Glasgow on Scotland's coast, though shippers can also use Grangemouth near Edinburgh. But neither are deep-water facilities, so feeder vessels must sail the whisky to the deep-sea ports of Liverpool, Southampton, London Gateway, Teesport, and Felixstowe in England—or Rotterdam and Antwerp in Europe—for the ocean voyage.

One of the main ocean routes for U.S.-bound scotch is from Liverpool to New York and New Jersey, though other U.S. destinations include Los Angeles, Long Beach, Houston, Oakland, Miami, and Port Everglades. The journey to New York takes about 10 to 20 days, while it's 40 days to Los Angeles. Lately, however, supply-chain woes have been delaying arrivals by two weeks or more.

4. On to the Local Liquor Store

Once the whisky arrives in the U.S., the market's three-tier system takes over. Importers receive and disburse it to wholesalers, who then transport it, state by state, to retailers across the nation. Thus the precious liquid arrives, ready for you to buy and take to its final destination—your home.