California Wine Country Gets a Taste For Whiskey

When touring northern California, it's not grain that comes to mind, but grapes. A mere hour north of San Francisco lie Sonoma and Napa Counties—home to over 1,700 wineries and the crown jewel of American wine, Napa Valley. While picturesque wineries and verdant vineyards are the main draw, craft distillers have staked their claim in wine country too, and are offering up something different for the wine-loving masses.

Making your way to Sonoma, Napa, or beyond from San Francisco, the closest major transportation hub, is not too difficult—just hop in a car and hit Highway 101, wine country's main artery. In an hour's time, you'll find yourself surrounded by lush expanses of vineyards, and quick trips off the highway will also take you to a number of distilleries. One of the first is Sonoma Distilling Co. in Rohnert Park, a small city with redwoods, creeks, and distant mountain views located on the doorstep of Sonoma County. The distillery is housed in a modern hangar-like building that looks almost industrial, but the whiskeys are entirely grain-to-glass. Most of the grain is sourced from California (Canadian and Midwestern grain is included to fill out needs), but all distillation, aging, and bottling takes place on-site.

Sonoma Distilling was founded in 2010. Rye was once at the forefront, but these days the distillery's Sonoma County bourbon is the star. It's not the only popular bourbon made here: Sonoma also offers a cherrywood-smoked bourbon, made using an on-site smoker. Rye still plays a prominent role, but in smaller, more experimental ways, including an annual release that's infused with Perigord truffles from France. Additionally, there's a cherrywood-smoked rye on the roster.

In nearby Sonoma proper, Prohibition Spirits has distilled whiskey in the city's industrial area since 2012. Here, wine country played a direct influence on owners Fred and Amy Groth's desire to make whiskey. “We were trying to figure out how to make a wine country-influenced whiskey, considering that all whiskeys, to me, start out the same,” says Fred. “Eighty percent of the flavor is really coming from the barrel. So if we can influence that barrel, and aging, then we can come up with something that's unique and representative of Sonoma and wine country—a true crossover hybrid.” While Prohibition Spirits does distill a portion of its whiskey, Fred notes that he considers the distillery more of a negociant, working with local distilleries and buying their whiskeys to round out their own brand: Hooker's House whiskeys.

Named after General Joseph Hooker (a Civil War-era Sonoma legend), the core lineup includes a straight bourbon finished in pinot noir barrels from Schug Winery, straight rye finished in zinfandel barrels from Gundlach-Bundshu Winery, and a sour mash whiskey finished in wine barrels. Amy notes that there are other occasional one-off releases, as the distillery is constantly experimenting. This year, for instance, they've been working with smoke—using vacuum extraction to pull smoke through whiskey and brandy, and bringing peat in from Scotland.

Continue north on Highway 101 and you'll find more distilleries, some surrounded—quite literally—by vineyards and winery tasting rooms on all sides. Not far outside Santa Rosa is Sebastopol, home to many wineries, among them Kosta Browne, Clifton Family, Dunah, and Pax Wines—and that's just the tip of the iceberg. Nestled among them is Spirit Works, located in an upscale shopping center that was once an apple cannery. This distiller revels in its status as an outlier in wine country, noting that most people who seek them out are true whiskey aficionados rather than casual wine tourists.Spirit Works's grain is mainly sourced from California, specifically the Sacramento Valley. A small percentage of its rye is grown right down the road, and used for the annual release of its Gazelle rye label. While locally sourced grain contributes to the overall profile of the whiskeys, the distillery's proximity to the Pacific coastline—about 15 miles away—and its temperate climate are key influencers. The absence of major temperature swings, as seen in places like Kentucky or Texas, lends a mellow aspect to the whiskey, and the sea air contributes a subtle effect, ultimately creating smooth, soft, and sippable whiskeys. Spirit Works's star performer is its Four Grain straight bourbon, which routinely sells out, though its wheat whiskey and cask strength variants of its core range also drum up plenty of interest. 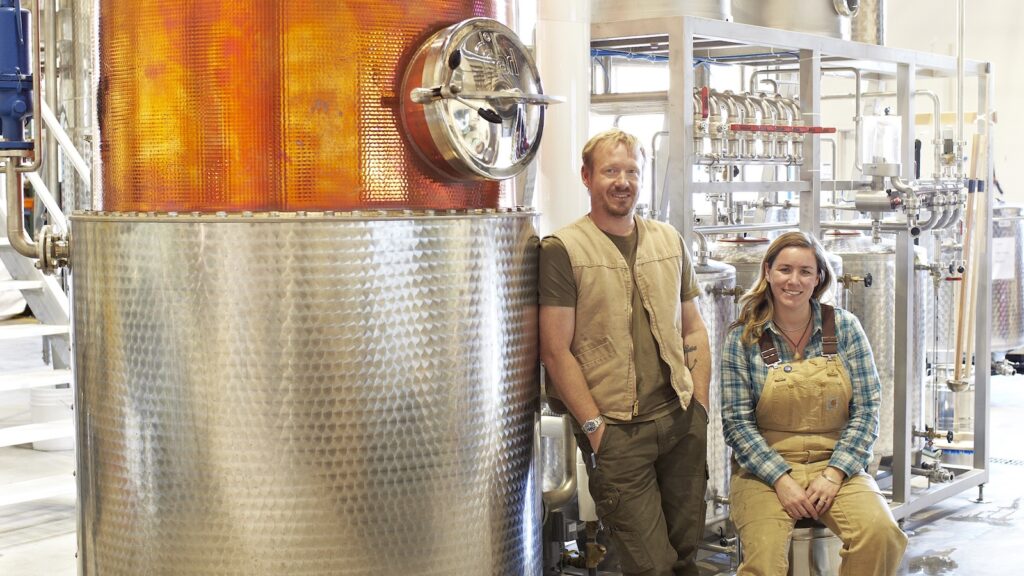 Several miles up the road from Sebastopol is the town of Graton, where winery tasting rooms and grapevines abound. In the thick of it all is Redwood Empire Distilling, which is located within a winery. “We utilize a lot of the same resources, people, materials, barrels, aging regimens, all of that, as…we have countless ties to the wine world,” says head distiller Lauren Patz. Redwood Empire Distilling currently uses sourced liquid, but the brand is ramping up production of its own-make distillate, made from 100% California-grown grain. In recent years, the Redwood Empire label has also experimented with locally coopered barrels. “There are a lot of great cooperages on the wine side building beautiful barrels for wineries, and they're starting to adapt for the whiskey business,” says master distiller Jeff Duckhorn. (Both the Patz and Duckhorn names will be recognizable to wine lovers—Lauren is part of the renowned family that co-founded Sonoma-based Patz & Hall, while Jeff is part of Napa Valley's Duckhorn family.)

Out of around 5,000 barrels currently aging on-site at Redwood Empire, 4,000 contain house-made whiskey, though Duckhorn continues to purchase whiskey from MGP and Bardstown Bourbon Co. to meet demand. Of the nearly 35,000 cases Redwood Empire sells annually, 20,000 are house-made whiskey—the remainder are sourced. A second still has been purchased to boost production, and the team is looking for a new facility nearby to support further growth.

Among Redwood Empire's whiskeys are two newly released bottled in bond expressions, Grizzly Beast bourbon and Rocket Top rye, which will be released annually. These join a core lineup that includes Pipe Dream bourbon, Emerald Giant rye, and Lost Monarch blended whiskey. For both Patz and Duckhorn, the unique proposition of California whiskey is its gentle flavor profile, as well as each distiller's dedication to following their own path. “California whiskey embraces this ‘go your own way' approach, and we see each distillery crafting their own spirit in their own special way,” says Patz. “We do that here, through the addition of purchased whiskey into our blend, and we put a lot of effort into balancing the flavor profiles. The general aging process in California, too, lends itself to a softer, mellower flavor profile, as we age for longer and under less drastic temperature changes.” 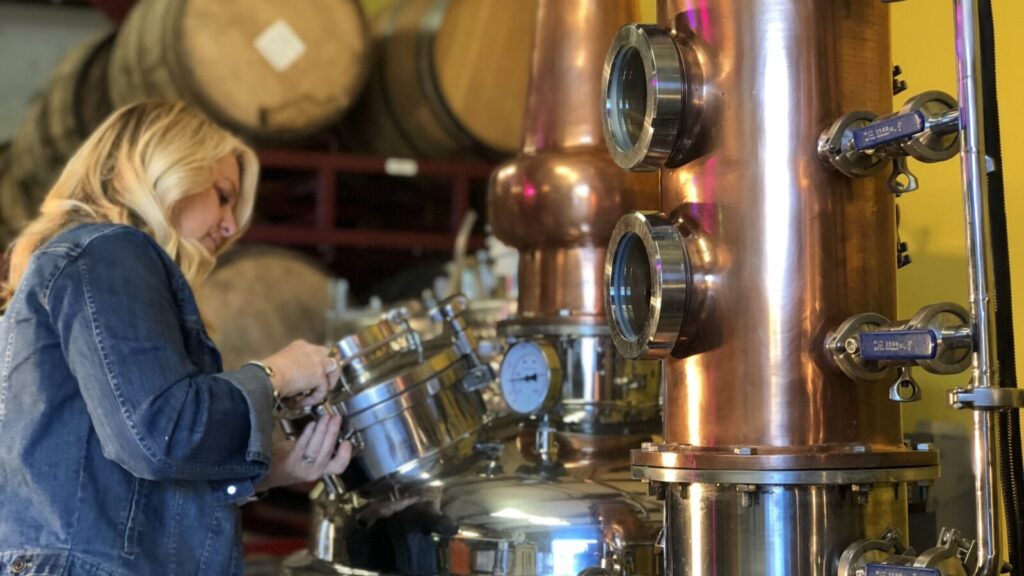 At Prohibition Spirits in Sonoma, Amy Groth (pictured) and her husband Fred have been distilling whiskey since 2012.

Further north and slightly more inland, in Healdsburg, Alley 6 Craft Distillery experiences more dramatic temperature changes from night to day and season to season, which ultimately means the whiskeys are bolder and take less time to develop. “We don't have hibernating alcohol that's going to take four to five years to evolve,” says Alley 6 distiller Jason Jorgenson. “This means we can pretty consistently have fun with weird stuff we're experimenting with.” Such experimental releases include a series of whiskeys finished in seven different wine casks, a single malt, and a rum-cask finished whiskey. While Jorgenson takes pride in the distillery's experimental nature, rye is at the heart of its production, and was the first whiskey he ever made. “The rye is our flagship product, and it was the one whiskey we had created in our garage before we actually started the distillery,” he says. Alley 6 rye accounts for the majority of production, and is one of the only whiskeys available outside the distillery, in addition to the Alley 6 single malt.

One of the northernmost distilleries in California wine country—and also the veteran of the group— is Charbay, located in Ukiah, in Mendocino County and founded in 1983. As with its fellow wine country distilleries, Charbay's locale is known less for distilling than winemaking, with some large-production wineries—like Frey, Bonterra, and Fife—within city limits. That makes Charbay's calling card even more contrary, as the distillery specializes in distilling beer. One of its primary releases, R5, is double-distilled from Sonoma County-based Bear Republic Brewery's Racer 5 IPA, and is chock full of intense hop flavor. A more recent release is Doubled & Twisted, a blend of three whiskeys: a 4 year old from straight malt, an 8 year old from stout, and a 4 year old from pilsner. Master distiller Marko Karakasevic is keen on getting ultra-aged whiskeys out the door in the near future. “The next small run we have is a whiskey from 2011, and that'll come out later this year,” he says. “It's a freak of nature, and I don't know if I'll ever be able to duplicate it again—we'll only have 200 bottles for sale.” Due to its size (it's the largest distillery in Mendocino County, and one of the larger distilleries in California wine country overall), Charbay cannot yet have a tasting room, as California law doesn't permit retail sales from distillers producing over 100,000 gallons of spirit each year, thus making a visit to the distillery somewhat moot. This is in contrast to many other California distillers (at least those mentioned in this story, all of which have tasting rooms open to the public). 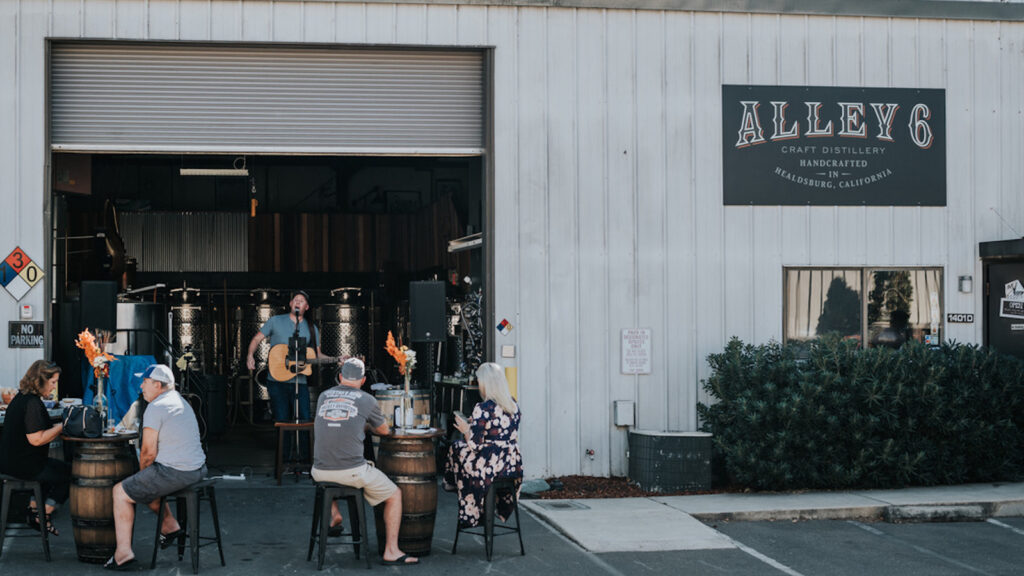 While Healdsburg's Alley 6 Craft Distillery is more experimental than some of its peers, a flagship rye remains its primary focus.

If you're leaving wine country the same way you entered—from San Francisco—a quick detour on the way back down will take you to Mare Island, a small peninsula in Vallejo, 23 miles northeast of San Francisco. Mare Island is home to Savage & Cooke, the brainchild of famed California winemaker Dave Phinney, who's behind household names like Orin Swift and The Prisoner. Since Savage & Cooke opened its doors in 2018, it has relied exclusively on sourced whiskey—mainly aged bourbons from Kentucky, Indiana, and Tennessee. By next year, however, its own-make distillate will make its way into bottles, especially as it creeps up in age (the distillery's oldest barrels are now between 3 and 4 years old). Among the first bottlings to feature Savage & Cooke's own distillate will be Second Glance American whiskey and The Burning Chair bourbon.

The whiskey now aging at Savage & Cooke is made primarily from grain grown less than 30 minutes from Mare Island. For Phinney, California's agricultural prowess is precisely what makes his whiskey so special. “The fact that we're able to get our grains from so close to the distillery, and that our water is sourced from an amazing spring in Alexander Valley, is what makes this area so great for whiskey,” he says. “Eventually, we'll have a product that's grown, made, and bottled at the source. Even the barrels are made here.” All Savage & Cooke's whiskeys are finished in wine barrels from Phinney's Napa Valley Cabernet projects. Phinney has created a multidimensional experience for his guests, offering tours, specialized tastings, and a restaurant.

So, while wine may top the agenda for most travelers visiting California's wine country, consider stopping at a distillery on your next trip. You'll discover that the creative California mindset extends far beyond wine, to exceptional whiskeys as well.