Here's Why You Should Visit The Remote Orkney Islands

Arriving on Orkney, with its massive Stone Age monuments that predate the Pyramids of Egypt, you are no longer among Scots, but Orcadians. Genetic studies support that these island dwellers are a breed apart, indicating that 60 percent of the Northern Isles' male population is of Scandinavian ancestry, some of the most concentrated Viking heritage in all of Britain. It's logical, given that a Viking longship from Norway could reach this archipelago of 70 islands north of the Scottish mainland in 24 hours, the equivalent of a day's drive for an intrepid seafaring Norseman.

Making their independence even more apparent, when an Orcadian refers to ‘the mainland,' he almost certainly means mainland Orkney, the largest island, and home to the towns of Stromness and Kirkwall. The latter is the island's capital, with the 12th century red sandstone St. Magnus Cathedral at its heart. Mainland Scotland is just ‘Scotland.' And whatever you do, refrain from referring to “the Orkneys” if you don't wish to see Viking blood boil.

As evidenced through 5,000 years of history, Orkney has been a hospitable home to generations. Even today, it frequently tops British polls for overall quality of life. The climate is relatively benign, if windy, crime rates are low, education and health provisions are good, and the scenery is superb. Add to that some of the finest local meat, seafood, and cheese you will ever find, the presence of two whisky distilleries, two breweries, a gin-making operation, and a winery, and this fine place to live makes an amazing place to visit.

In terms of whisky making, both of Orkney's active distilleries are situated close to Kirkwall. One has enjoyed a high profile with regard to its single malts for at least two decades, while the other is just starting to emerge from the shadows. 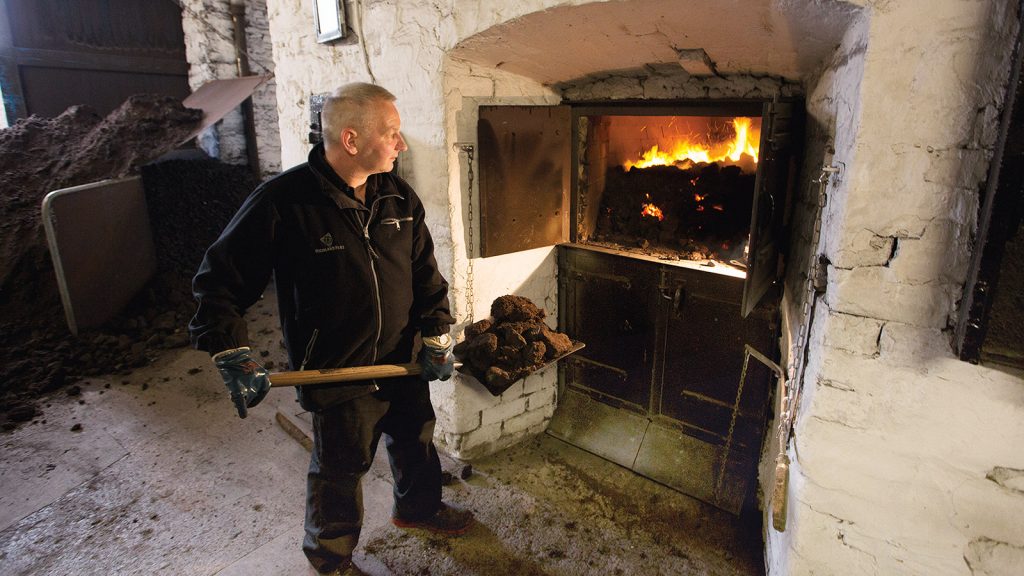 Kilning with peat at Highland Park

Highland Park stands on high ground to the south of Kirkwall, and was established in 1798 by David Robertson on the site where local church officer Magnus Eunson had previously operated an illicit still, hiding kegs of his whisky beneath the church pulpit, if legend is to be believed.

Today, Highland Park—with its four stills and annual capacity of 2.5 million liters of spirit—is owned by the Edrington Group, which also owns Macallan. It is currently managed by Yorkshire-born Marie Stanton, who spent a decade with William Grant & Sons, principally at Balvenie Distillery.

According to Stanton, “There are a number of factors that make Highland Park what it is. The fact that we have our own floor maltings and use our own peat is absolutely fundamental. The peat is cut from Hobbister Hill, and it gives the whisky its characteristic heathery, smoky profile. The smokiness is nothing like you get from an Islay distillery. Around 30 percent of our malt is produced in our own maltings, and is peated to 30-40 parts per million (ppm, a measurement of phenols, or ‘peatiness,' in whisky). It's then mixed with unpeated malt sourced from the mainland.” For comparison's sake, Ardbeg, the heavily peated Islay single malt, boasts around 55ppm.

Wood management is also a contributor to the quality and character of Highland Park, and oloroso sherry casks play a major part in shaping the maturing spirit. “We keep as much Highland Park on the island as possible to mature,” says Stanton, “and around 50 percent of what we produce is sold as single malt.

“Maturing it on the island plays a significant part in the outcome, as we have very steady ambient temperatures and levels of humidity. It doesn't usually get very cold or very hot on Orkney. It's a nice, consistent regime for maturation. The geographical separation gives us something extra too—you don't just fall over us! You have to want to get here.” 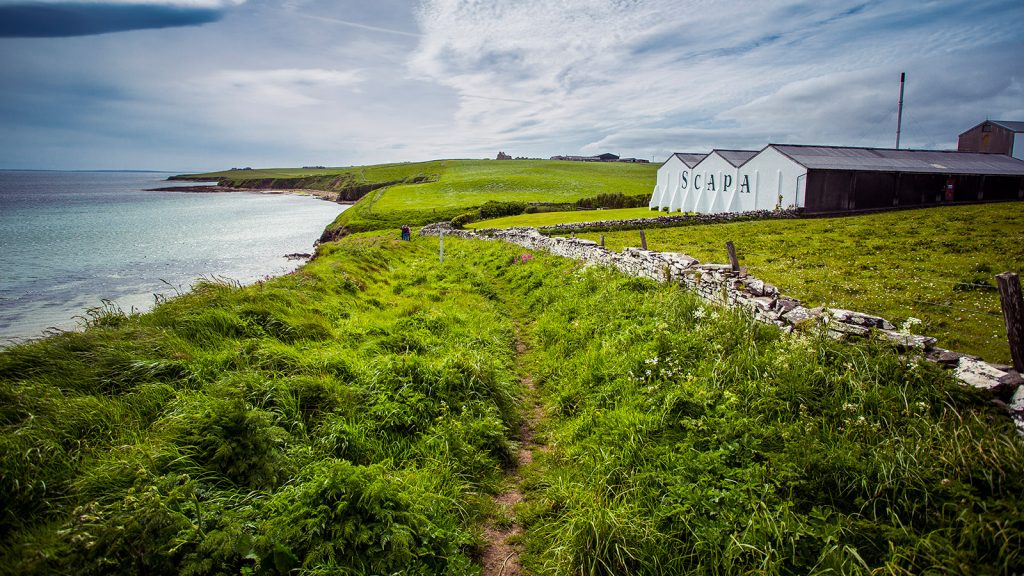 It requires equal determination to reach Scapa Distillery, standing one and a half miles southwest of Highland Park, overlooking the wide waters of the natural bay named Scapa Flow, which has witnessed more than its fair share of naval history, including the dramatic WWI scuttling of 52 ships of the German High Seas Fleet in June 1919.

Until 2015, simply ‘getting there' wasn't enough with Scapa, as the distillery was not open to the public, and according to manager Richard Clark, the principal attraction for aficionados is the chance to see the last working ‘Lomond' still making Scotch whisky.

“Lomond stills were equipped with intermediate baffle plates,” says Clark, “which meant you could alter the style of spirit being produced. This one was installed at Scapa in 1959 and the plates have now been taken out, but what you have, because of the shape of the still, is a great deal of reflux, and to add to that, it's fitted with a purifier.” This results in a relatively light and clean style of spirit.

Clark is on his second spell at Scapa, having first worked there during 2004-05. He returned to Scapa in 2015, the same year that Marie Stanton took over Highland Park, but the distillery is now ‘remotely managed' by Chivas Brothers, and Richard Clark visits twice a month on average.

This seems eminently reasonable when you discover that he lives in the Moray town of Forres, 180 miles and a wide stretch of water away from Orkney, and that the two other distilleries within his remit are Allt-a-Bhainne and Braeval—both in the heart of Speyside and each just over 30 miles from Forres.

Scapa Distillery has spent much of its life since its establishment in 1885 providing malt for blending purposes, and is only now really sticking its head above the single malt parapet. However, Richard Clark purses his lips and shakes his head at the suggestion that Scapa is Orkney's ‘second' distillery.

He stresses that he prefers the term ‘other' rather than ‘second,' declaring, “We're not in competition with Highland Park. Scapa is a hidden gem. Lots of local people drink Scapa, and it's almost as though they want to keep it for themselves!”

While Highland Park has long offered a wide array of inventive aged expressions, Scapa only offered a 16 year old ‘house' botting in recent years. That was replaced in 2015 by the NAS Skiren and Glansa - finished in Islay single malt casks—while 12 and 23 year old cask strength Collection editions are also available at the distillery and other Chivas visitor centers. 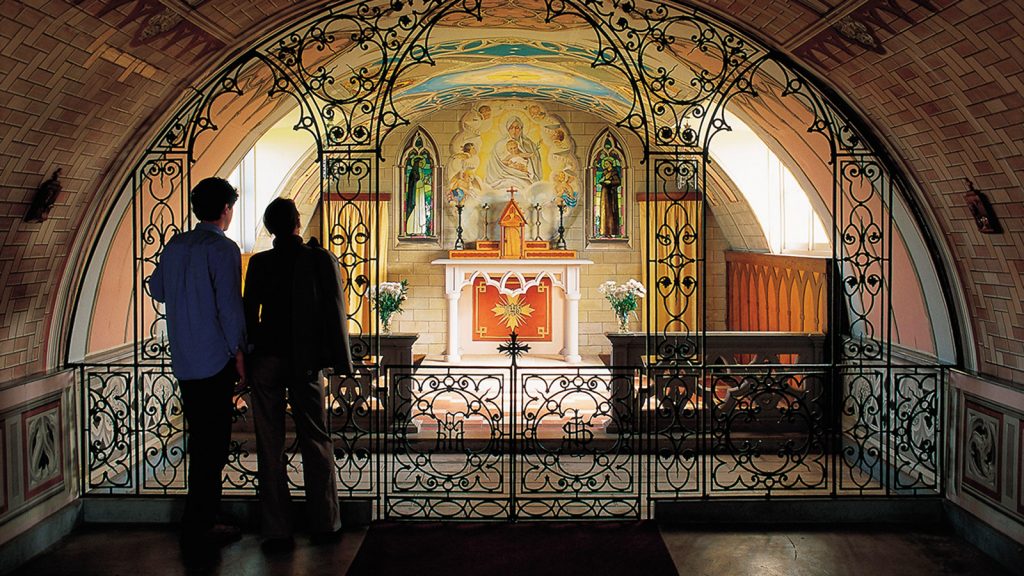 Marie Stanton hails from Yorkshire; Richard Clark is a Glaswegian. So both are able to offer an outsider's perspective of Orkney and what makes it a special place.

“If I was to recommend things for visitors—apart from coming to Highland Park, of course!—it would be to see the Italian Chapel and go down to the Orkney Inga Saga Centre and the Bu at Ophir. It all really comes to life when you see the remains of the dining hall where they used to cut each other's heads off! Alternatively, in summer just find a secluded little beach and relax,” says Stanton.

Richard Clark recalls that, “The first time I came, back in 2004, it was summer, the time of all the local agricultural shows, and I was listening to BBC Radio Orkney. The presenter spoke about ‘chow chimping,' which I thought must have something to do with a breed of dog and monkeys. It turned out he meant ‘show-jumping,' so I had to learn the local dialect pretty quick!

“I love the sea, as a west-coaster, and the history of Orkney is phenomenal. You've got all the nautical history of Scapa Flow itself, right next to the distillery. If you get the chance you should go along to Broch of Birsay early in the year. The rocks stand 120 feet in the air and waves will be breaking over them!”