How to Host a Whisky-Centric Tea Party

Coffee lovers have been embracing whisky barrel-aged coffee, and now British tea company eteaket has partnered with Tomatin Distillery to create a tempest in a teapot—a tea aged in scotch whisky casks. The blend of black teas from Assam, Ceylon, and Fujian has subtle flavors of fruit and smoke derived from its time in wood. It's available for a limited time only, but there are also whisky-flavored teas from the Edinburgh Tea & Coffee Company and Whittard.

But why stop with the tea? Here's our recipe for a full-on whisky tea party. From bourbon-laden cakes to scotch-laced honey for your scone, these whisky treats are a great reason to raise a pinky.

Tea Sets, Sweets, and Savory Foods To Go With Your Whisky Tea 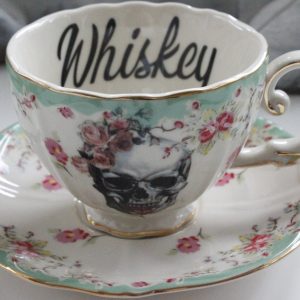 A tea party is an occasion to lay a beautiful table, so make sure your décor matches the theme. AngiolettiDesigns offers tea cups and tea sets featuring off-beat imagery, including whiskey themes, and will even execute custom designs.. Don't forget the table linens: These “liquid lunch” cloth napkins from WellDoneGoods can be used again and again. And for centerpieces, repurpose old whisky bottles as vases—Pinterest has dozens of creative ideas in this department.

A good tea party spread includes a mix of both sweet and savory foods, served in small portions so that guests can sample widely. Tea sandwiches can be prepared in advance and cut into quarters. Make some with whisky-infused cheese: Cahill offers an Irish whiskey-infused cheddar, as does Kerrygold, while Snowdonia's Amber Mist uses peaty scotch and Barely Buzzed, from Utah's Beehive Cheese Company, is rubbed with High West Double Rye. Add ham or turkey—or make your own whisky bacon—and don't forget the whisky mustard. 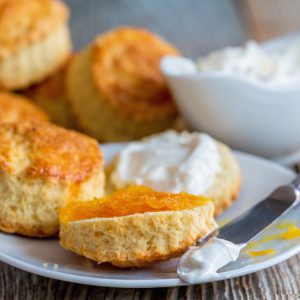 …But Don't Neglect The Scones…

Scones are a tea party staple, and they're dead easy to make. Try this recipe from Smitten Kitchen or this recipe from the aptly-named Scotch & Scones blog. (Pro tip: Soak currants, raisins, or other dried fruit in whisky for a day or two before folding them into your dough.) If you aren't baking-inclined, Gavin's Country Inn of Cornwallville, New York, will ship Irish whiskey scones straight to your door. Scones are traditionally served with butter and orange marmalade—try Mackay's, made with scotch. If you prefer a drizzle of honey, this Scottish heather honey blended with 12 year old GlenDronach will add sweetness with a kick.

Of course, no tea party is complete without cakes, cookies, and sweets. Bourbon cakes abound, from this one topped with walnuts to this decadent bourbon butterscotch crunch cake. You could also serve a chocolate bourbon pecan torte, but don't forget the whipped cream. (If you make it yourself, whisk in a tablespoon of whisky.) Scottish Gourmet USA offers a variety of cakes made with scotch from various distilleries, including Glenfiddich and Tomatin. The same site offers fudge made with Edradour, Tobermory, Glenfarclas, and other single malts. Or stock up on Whimsy & Spice's hazelnut-chocolate chip cookies filled with a scotch-chocolate cream filling.

Make Time For Actual Whisky Too

Hosting a tea party can be a lot of work (especially if you've been on your best behavior for Aunt Gertrude). After the guests go home and cups are back safely in the china cupboard, it's time to enjoy a pour of Glengoyne's Teapot Dram. Sherried, lush, fruity, and chocolatey, it'll go great with any leftover goodies too!
sbarton Whisky Life Food How To Tomatin