How to Make Whisky Ice Cream

Making homemade ice cream is a bit like mixing a cocktail: it's an easy way to impress, as long as you follow a good recipe. And like a good cocktail, ice cream can include a kick of whisky, making for a refreshing, delicious spiked frozen treat.

Incorporating whisky into your ice cream is pretty simple, and once you feel confident making a batch of basic bourbon vanilla, you can play around with other flavors, using your favorite cocktails as inspiration. From the Manhattan to the Mint Julep, you'll wonder why you didn't add whisky to your ice cream machine sooner.

Don't Be a Lush

The biggest challenge when making spiked ice cream, of course, is that alcohol doesn't freeze. “You can only put a certain amount in, otherwise your ice cream will come out soupy,” warns Lauren Schultz, co-owner of Purple Door Ice Cream in Milwaukee.

There are two ways to do this. First, you can put the whisky in a pot over a low flame and let the alcohol burn off until it's reduced by about half. Or you can use Schultz's preferred method, which is simply limiting how much alcohol you add. “This keeps the integrity of the whisky and brings out the flavor more,” she says.

The ice cream makers at Coolhaus stick to a maximum of ¼ cup of whisky to every 1½ quarts of ice cream base, according to cofounder Natasha Case.

Think of It as the Finishing Touch

Wait to add the whisky until you've made your base. Then stir it in and set everything in the fridge to cool. Whisk the cooled mixture one more time before your pour it into your ice cream machine to be sure everything is nicely incorporated.

If your ice cream recipe calls for salt, be mindful. “Alcohol and salt both lower the freezing temperature, so adding too much salt to a boozy ice cream could make it hard for your ice cream to set up,” Case explains.

Depending on what flavor you're making, add a touch of vanilla to your mix. “It will help bring out the flavor of the whisky,” Schultz says. However, if vanilla seems like it would mask other flavors or be off-putting, omit it.

Bourbon may be the best whisky for ice cream, experts say. “Scotch has an edginess that can come out in ice cream, whereas bourbon is sweeter and fuller,” says Steve Schultz, Lauren's husband and Purple Door's co-owner. But just as with drinking your whisky, use what you like best.

When you're ready to scoop up your delicious creation, be patient. “It tastes best if you let it sit for 15 minutes or so, until it just starts to glaze on the top—that's when the flavors really come through,” Steve Schultz says. So put your container out on the counter and go catch up on Instagram for a bit. 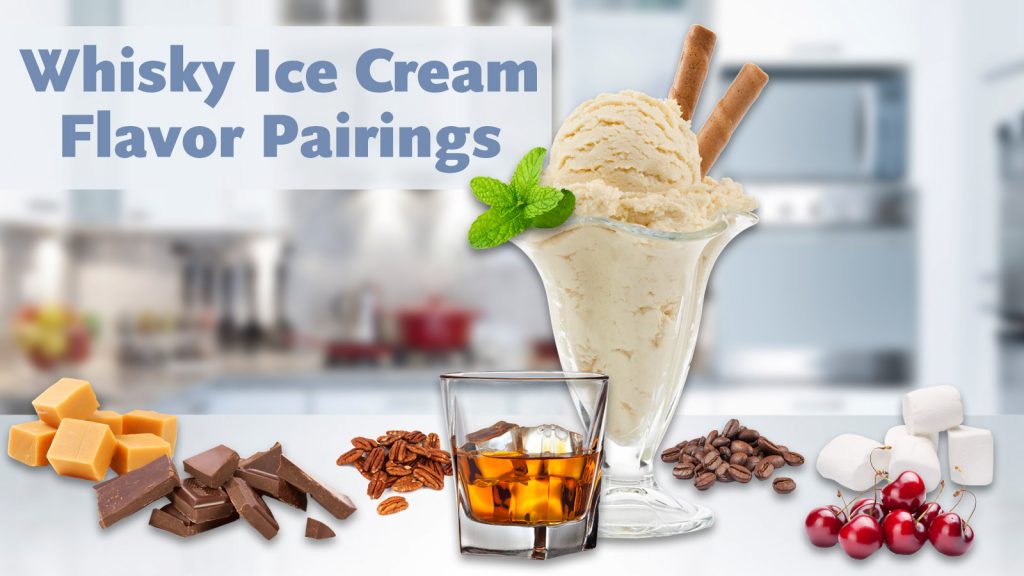 Vanilla is so...vanilla. Vanilla and bourbon is an improvement, but if you want to have more fun, consider these flavor pairings:

Ready to give it a go? Try these basic recipes. One is the typical cooked custard base with eggs, while the other is a non-cooked eggless version. Try experimenting with different whiskies to find your preferred taste.

by Natasha Case, cofounder of Coolhaus

In a 4-quart saucepan, combine milk, cream, and roughly half the sugar. Set over high heat, and cook, stirring occasionally and not over-zealously, until the mixture comes to a boil, about 5 minutes.

Meanwhile, in a medium bowl, whisk egg yolks and remaining sugar until smooth, heavy, and pale yellow, about 30 seconds.

When cream mixture just comes to a boil, whisk, remove from heat, and, in a slow stream, pour half of it over the yolk-sugar mixture, whisking constantly until blended. (This is called tempering the eggs, so that they do not scramble.)

Return the pan to stovetop over low heat. Whisking constantly, stream yolk-cream mixture back into pan.

With a wooden spoon, continue stirring until the mixture registers 165 to 180 degrees on an instant-read thermometer, about 2 minutes. Do not heat above 180 degrees, or the eggs will scramble. The mixture should be slightly thickened and coat the back of spoon, with steam rising, but not boiling. (If you blow on the back of the spoon and the mixture ripples, you've got the right consistency.) Stir in the whisky.

Pour the base into a clean airtight container and refrigerate for 12 to 24 hours before using. Use the base within 3 to 5 days, processing in an ice cream maker according to the manufacturer's instructions.

In a bowl, stir together cream and milk. Add sugar and whisk until sugar is dissolved and mixture is smooth. (There should be no sugar visible on the bottom of the bowl when it is stirred or spooned out.) Stir in vanilla and whiskey.

Chill mixture by creating an ice bath: Fill a large bowl halfway with ice cubes and enough cold water to just cover the ice cubes. Place the bowl with cream mixture into this larger bowl and let cool for 30 to 45 minutes.

Remove ice cream mixture bowl and cover. Refrigerate at least 3 hours and up to 24 hours.

Churn the mixture in an ice cream maker, then freeze according to manufacturer's instructions.
Whisky Life Food How To DIY brisher