There's a new sherry-finished whiskey in town, and this one offers an unusual twist. J. Rieger & Co. Monogram Whiskey is a blended whiskey—comprising 11 year old rye sourced from Alberta Distillers and 9 year old light corn whiskey sourced from MGP—that has been finished for 18 months in sherry barrels. All sounds pretty normal so far, right? 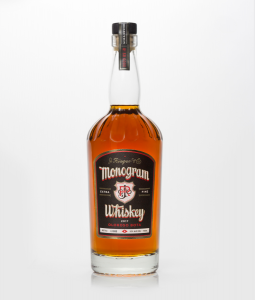 Here's what makes it special: the barrels themselves are roughly 100 years old and came from the solera of Williams & Humbert, one of the oldest sherry producers in Spain. Unlike new oak casks that have been seasoned with sherry for the express purpose of aging whisky later on (the way most whisky producers obtain sherry casks), solera botas are prized for their neutrality—no one wants an oaky sherry. Old botas are also valuable to sherry bodegas for the colonies of yeast and bacteria that have set up shop in the wood, facilitating the continuity of the wine's character over decades of fractional blending. An established sherry bodega might hold on to its botas for well over 50 years and even up to a century, according to “A Modern Guide to Sherry” by Talia Baiocchi. These sorts of casks rarely make it out of their original homes, and I've never heard of one being used to age whiskey until now.

Although the youngest whiskey in the blend is 9 years old, Monogram could easily be mistaken as older thanks to the influence of the botas, which impart characteristic flavors of highly mature whiskies (think “old library book”). It's 52% ABV and only 1,000 bottles are available at $100 each. J. Rieger plans to release a unique whiskey each year under the Monogram label, varying the style, barrels, finishing techniques, proof, age, and other factors. The company plans to continue using the solera for some Monogram releases, but won't be replicating this particular batch—so if you want to try it, track it down now.
sbarton New Releases News American Whiskey