Lagavulin's Distillery Manager Is Taking Over at Ardbeg

Islay is a small island, just 239 square miles, and—with nine working distilleries and counting—whisky is the heart of the community. Hundreds of Ileachs (Scots Gaelic for someone from Islay) are employed in the whisky business, and clichés about it being like family are actually true, as multiple generations may work alongside each other at the same place—or at another distillery just down the road. So when someone retires, even from one of the island's most important jobs, there's likely a well-qualified local ready to take their place. 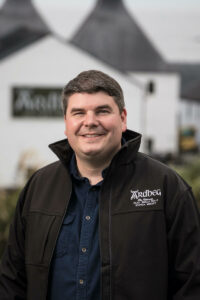 Whisky industry veteran Colin Gordon will take the reins at Ardbeg in October 2020.

And that's what is happening at Ardbeg, whose longtime distillery manager, Mickey Heads, is set to step down on Oct. 1. He'll be succeeded by Colin Gordon, a veteran of the scotch whisky industry who has spent the last eight years working for Diageo—first as site operations manager for the Port Ellen Maltings, which supplies malt to the majority of Islay's distilleries, and most recently as distillery manager at Lagavulin since 2018. With a wealth of knowledge about whisky's core ingredient, grain, and experience across Islay's industry, Gordon is well-prepared to assume the mantle at Ardbeg, even as the distillery's expansion—which adds two new stills to double capacity—comes fully on line in the second quarter of next year.

Heads has worked in the whisky business his entire career, including a stint at Ardbeg decades before he took over the distillery manager position in 2007. Under his keen eye, production has ramped up in an effort to keep pace with the demand for the distillery's whiskies, which are prized for their intense peatiness and oily, robust character. And, working with head of distilling and whisky creation Bill Lumsden and head of maturing whisky stocks Brendan McCarron, Heads has been instrumental in the development of numerous well-received releases, including Ardbeg Supernova, Ardbeg An Oa, and the recently launched Ardbeg Wee Beastie.

Though he'll no longer be running the distillery day-to-day, Heads will stay involved as chair of the Ardbeg Committee, the group of dedicated super-fans who number over 120,000 worldwide, for the next three years. He's a familiar face around the distillery and constant presence at Ardbeg Day during Fèis Ìle, and will remain on Islay in his retirement. No doubt he'll be back at Ardbeg from time to time in his capacity as chair, so this isn't goodbye just yet!
Scotch Ardbeg sbarton News Islay