These Whisky Achievements Are Larger Than Life

The world of whisky is bigger than ever. Whisky drinkers have their choice of options when looking for a dram, including whiskies with big proof, big scores, and big peat. Of course, whisky can be physically large as well, and we aren't just talking 1.75 L bottles. From big barrels to vast collections, these whisky accomplishments caught our eye for their sheer scale and size.

Monkey Shoulder blended malt whisky is giving the Oscar Mayer Wienermobile a run for its money with two 2,400-gallon cocktail “shakers.” Fashioned like cement trucks, the two Monkey Mixers have traveled a combined 119,200 miles since their debut in 2017, visiting 135 different cities and serving 224,000 cocktails. The Monkey Mixers were sidelined in summer 2020 due to the pandemic but look for them to make a return in a city near you.

The Barton 1792 Distillery is home to world's biggest whiskey barrel. Although this display was never used to actually age spirit, (it has no heads) at 15 feet tall it could theoretically hold 8,000 gallons. The barrel was built by students as a tribute to the bourbon industry and displayed in Bardstown before being moved to its current location at the distillery. 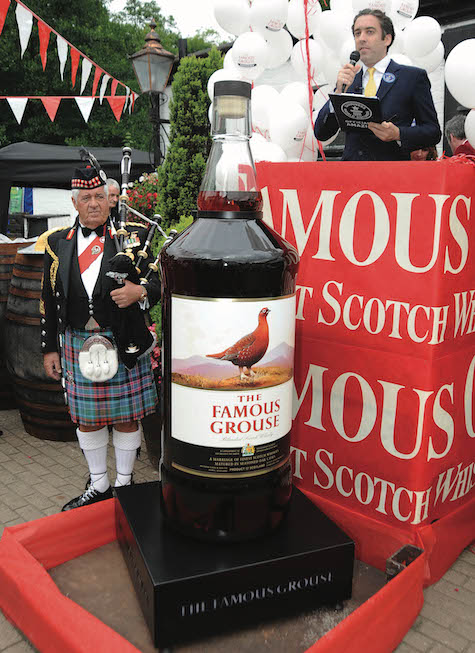 The Famous Grouse took home the Guinness World Record for largest bottle of scotch in 2012 with a vessel that measured 5 feet 7 inches tall.

On August 12, 2012, Guinness World Records declared a 5-foot 7-inch bottle of Famous Grouse to be the largest bottle of scotch. At 228 liters, the bottle, which took a team of four glass blowers two days to create, holds the equivalent of 9,120 standard servings of whisky.

In 2008, the Kentucky Derby was home to a massive Mint Julep when official drink sponsor Early Times brought in a 206-gallon glass that stood 6 feet tall. Weighing in at over a ton when filled, it was estimated to hold more than 5,000 servings of the iconic cocktail. Old Forester and sister brand Woodford Reserve have since taken over as Derby sponsors, but they have yet to top the colossal cocktail.

In January of 2019, Guinness World Records bestowed the title of Most Whisky Available Commercially in The World to San Diego's The Whiskey House. At the time, the Gaslamp Quarter bar had 2,467 distinct bottles of whisky on the wall, though that number has ballooned to 3,500, with an estimated 20,000 in inventory, spanning 27 countries and 45 U.S. states.
tsimmons Features Fall 2020 Insights