Grab a Dram at One of These Lesser Known Louisville Bars

When talk turns to the country's best bourbon bars, Louisville definitely shines—especially during Kentucky Derby week. While favorites like Proof on Main, The Silver Dollar, and Bourbon's Bistro are sure bets, these recent arrivals are well worth a wager.

Hell or High Water is a speakeasy located beneath the bustle of Main St., a few blocks from Louisville's Whiskey Row. Enter through a hidden door and descend the narrow staircase to a softly lit cellar enclave, splashed out with red velvet booth seating and art deco style.

While the bottle list is deep, cocktails are the best route. Menus are updated seasonally, and split between Hell (stronger, spirit-forward) and High Water (bright and refreshing). Recent offerings include Cardamum's the Word, made with barrel-pick Russell's Reserve bourbon, rum blanc, cardamom syrup, cardamom tincture, and black lemon ($15). On the lighter side, there is Pass the Torch, a rye-based cocktail with green chartreuse, lemon, marshmallow gel, and orange marmalade ($16). Reservations required.

This temple of brown spirits opened in 2020 as an extension of Doc Crow's Southern Smokehouse and Raw Bar—the two are adjacent—aiming to offer the largest whisky selection in America. By the look of their nearly 60-page drinks list, complete with a coding system to help locate bottles, it appears they've succeeded.

With over 2,000 bottles on offer, there are pours for every taste and budget. You can zero in on a specific style or order a curated flight. Go vertical with a taste of every Angel's Envy Cask Strength dating from 2012 or every pact of Blood Oath. Doc's is also the place to sample those unicorns you've been chasing, such as a taste of Orphan Barrel Whoop and Holler 28 year old ($226/2 oz.) or E.H. Taylor Warehouse C Tornado Surviving ($1,500/2 oz.). There's even a lager, brewed locally, exclusively for Doc's, appropriately dubbed Whiskey Chaser. 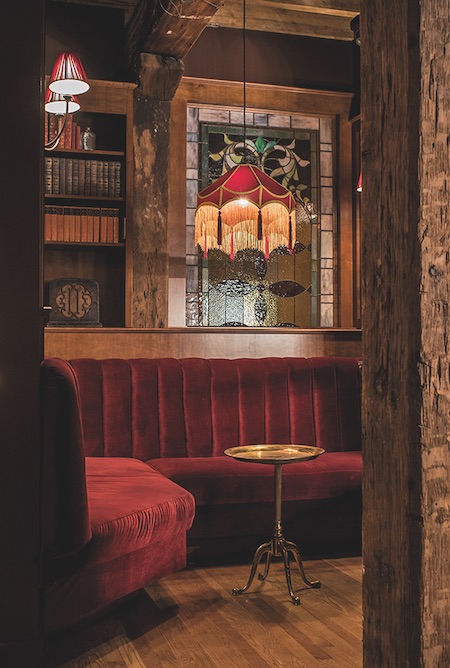 The Bar at Fort Nelson

Located on the second floor of Michter's Fort Nelson Distillery, The Bar at Fort Nelson is a destination unto itself for classic and contemporary cocktails served with precision in a chic, cozy atmosphere.

On the classic side of the menu, try a Fort Nelson Crusta, made with Michter's US*1 bourbon, yellow chartreuse, lemon, demerara, honey, and creole bitters ($14). Bar staff recently revamped the lineup of modern cocktails, including a Wake Up to Slow Down made with Michter's rye, manzanilla sherry, pear, chamomile tea, and honey ($15). The complete Michter's lineup is available—including a pour of Celebration Sour Mash—as are spirits from Michter's sibling Chatham Imports.

Debuting a bar on New Year's Eve is a bold move, but that trial by fire worked out for North of Bourbon, says co-owner Daniel Holyfield. He also owns a local flooring company and mill, and used reclaimed wood from a rickhouse for the floor, tables, and bar top. The booths are ensconced in enormous bourbon barrel replicas—made from charred white oak.

The bar stocks more than 300 bourbons, as well as a “dusty locker” with vintage bottles like an Old Crow 10 year old Chessmen decanter and Wild Turkey “Cheesy Gold Foil.” Cocktails include several riffs on an Old Fashioned and one made with Maker's Mark, peanut orgeat, and cola—a play on peanuts in Coke, a Southern favorite.