While Blending on the Road, Marianne Eaves Launches a Blind-Tasting Whiskey Program

Driven by a relentless desire to push the bounds of flavor in whiskey and other spirits, Marianne Eaves hit the road for inspiration, and now she's inviting whiskey lovers along on the journey—through their palates, at least. The former Castle & Key master distiller announced in October the launch of a “mobile spirits laboratory” and Eaves Blind, a subscription service that encourages blind tasting through small-batch and single-barrel whiskeys chosen by Eaves from distilleries around the U.S.

Tennessee-born and Kentucky-raised, Eaves earned a degree in chemical engineering at the University of Louisville before becoming master taster atWoodford Reservein 2014, and took the reins at Castle & Key the following year. But she stepped down in 2019 to travel the U.S.—and start her consulting company, Eaves LLC.

“I was doing a lot of traveling and meeting new people, seeing new production facilities, learning about different regions of the U.S., and different expressions of these unique bourbons,” Eaves tells Whisky Advocate. “While I was working for Castle & Key, I saw bourbon very much in one way, and that's in line with pretty much all traditional Kentucky distillers. But as I went around the country, it became more and more clear that there's definitely more than one way to create delicious bourbon, and [I thought] how can I be inspired by that, and push the creativity and development that's happening in our industry?” 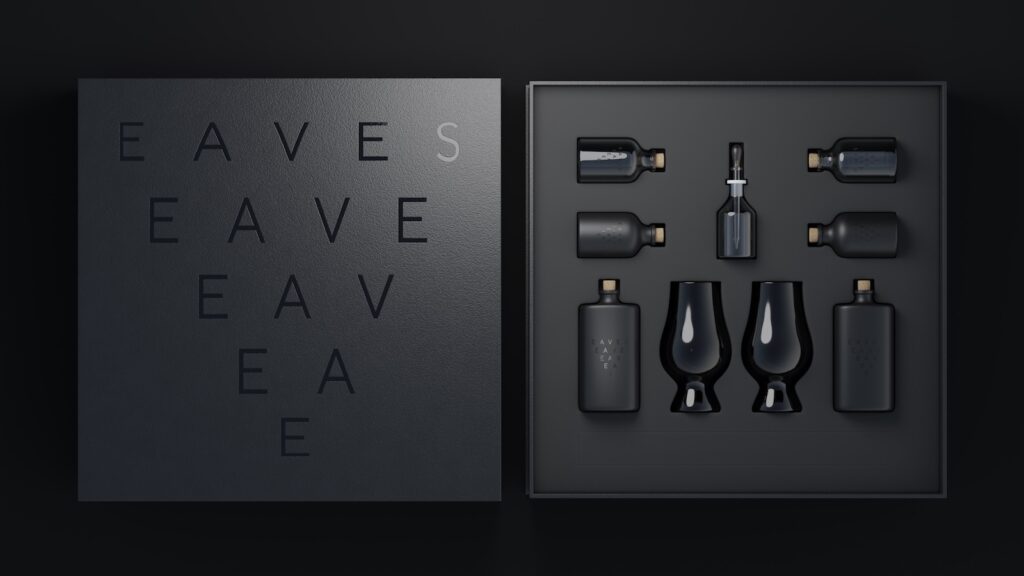 The Eaves Blind tasting program is targeted toward whiskey lovers seeking to sharpen their blind-tasting skills. Tasting kits include whiskey samples that come in opaque bottles to conceal the spirit's color, as well as a pair of branded black Glencairn glasses. (Photo courtesy of Eaves Blind)

The mobile spirits lab—which is still being built, and is “basically a box truck that's going to be converted,” Eaves says—will allow her to integrate her work as a blender and consultant into her new peripatetic lifestyle. “What I'm hoping to do with the laboratory is use it as a home base for my consulting business,” she adds. “I'm going to sample blends that I [create] as I'm traveling. It'll be product development, but on a small scale, [as well as] process improvement, some quality testing—and a whole lot of tasting.”

One project Eaves will continue to work on from the mobile lab is Sweetens Cove, a brand backed by Peyton Manning and Andy Roddick, among others. It launched last May with a 13 year old Tennessee straight bourbon, and Eaves spoke with us about it in June. “But I'll also be working on some rum, a brandy brand, and a handful of [other] whiskey projects,” she says. “I think the most exciting thing that's going to happen in the laboratory is the blending of new expressions of whiskey. A lot of that work is going to be for the Eaves Blind program, which is kind of paving the way for me to make this dream come true.”

Targeted at whiskey lovers seeking to sharpen their blind-tasting skills, the Eaves Blind program consists of four seasonal tasting kits, which in addition to whiskey include educational materials that explain the unique qualities of each sample. There are two levels offered: apprentice, geared toward newcomers to whiskey, and aficionado, for more experienced drinkers. Each apprentice kit ($300 for a year's subscription) includes two 100 ml samples of single-source bourbons blended by Eaves. The aficionado kit ($550) includes the same apprentice samples and adds two 50 ml single-barrel samples chosen by Eaves; two 50 ml water samples curated for each single barrel; a 50 ml water dropper for precise dilution; and a video tasting with Eaves. The samples come in opaque bottles to conceal the whiskeys' color, and both programs include a pair of branded black Glencairn glasses. “The impact of those visual cues, and how they [affect] the way you taste and perceive a sample,” is crucial to the tasting experience, Eaves explains. “I'm encouraging … people to leave their preconceived notions at the door.”

Whiskey lovers can subscribe until the end of 2020 at EavesBlind.com; the first kits are slated to ship in March. Significantly, Eaves won't reveal the source of any of the whiskeys until the end of the program. “That's actually a big part of the educational component of the kit,” she says. “I had an awakening through my transition from working for a big distillery to being a consultant and seeing the industry from a new perspective. At the culmination of the program, when the sources are revealed, I'm hoping that people will have a similar feeling that I did.”
Whisky Life News zkostro American Whiskey