Tennessee's capital city of Nashville boasts a lively craft whiskey scene, robustly supported by its acclaimed music, barbecue, and bar venues. At the edge of the city's Watkins Park neighborhood is Nelson's Green Brier, housed in the former Marathon Automobile factory. Here, past meets present: The Nelson's Green Brier name first appeared back in 1870, when Charles Nelson began distilling whiskey in the town of Greenbrier, 25 miles north of Nashville. Nelson's distillery shut down in 1909, and today his descendants Andy and Charlie are bringing back the family business, opening the modern iteration of Nelson's Green Brier in 2009 and making whiskey in-house since 2014.

While waiting for its whiskey to age, the company has released sourced Indiana bourbon under the Belle Meade name. The revived Green Brier label, which debuted in 2017, blends 75% in-house pot still whiskey and 25% contracted column still whiskey, with the ultimate goal being of making Green Brier entirely in-house over the next several years. Whereas charcoal filtering is more intensely integrated at George and Jack, the Nelsons opt for a mellower approach. “We're not too aggressive with the charcoal filtration, we put the whiskey through a barrel full of sugar maple charcoal that's in decent-sized chunks—but we're still experimenting with it, even if none of those experiments have hit [shelves] quite yet,” he says. Nelson adds that the distillery is playing around with different grains too, like heirloom varieties native to Tennessee. 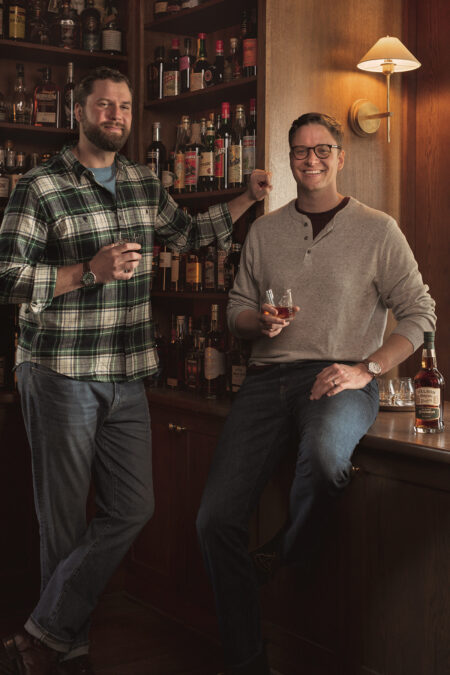 Charlie and Andy Nelson of Nelson's Green Brier Distillery. The brothers opened the modern iteration of their family business in 2009.

A few minutes' walk from Nelson's Green Brier is Corsair, the pioneering craft distiller that opened in 2010 and has since garnered a reputation for its idiosyncratic approach to whiskey making. Unlike many of its contemporaries, the distillery has steered clear of bourbon production to date, focusing instead on American single malt and malted rye. What's a producer to do when it goes against the grain—literally? “We're known for doing things a little differently, and of course our Triple Smoke is a single malt, which is pretty far from the standard corn-based Lincoln County Process Tennessee whiskey,” says Corsair COO Tyler Crowell. “But our owner Darek Bell is from Nashville, I'm from Nashville, and we're proud of our home and we want to showcase that—that's our focus, putting spins on tradition and expanding the notions of what [whiskey from Tennessee] can be.”

Closer to Nashville's Music Row, barbecue legend Carey Bringle (pitmaster of award-winning restaurant Peg Leg Porker) is known among whiskey lovers for his Peg Leg Porker Tennessee bourbon, which launched in 2015 and has developed a fan following for his whiskeys, like the 12 year old straight bourbon (which scored 91 points with our tasting panel) and 8 year old straight bourbon (which scored 90). Peg Leg Porker uses sourced whiskey, but Pringle has put his own distinct touch on the charcoal mellowing process. “I burn down hickory charcoal, and after we de-barrel the bourbon, we run it through the hickory charcoal to filter and finish it at the tail end of production, giving the whiskey our signature flavor,” he explains.

Musician Bob Dylan's Heaven's Door whiskey hopes to call Nashville's Sobro neighborhood home in the future. Plans to convert an old church into a distillery experience have been in the making, though master blender Ryan Perry notes that there's not yet a specific opening date. Eventually, however, he expects the space will be a beacon for the local community, artists, and whiskey enthusiasts alike, where more of the brand's experimental and innovative whiskeys can be showcased regularly. Heaven's Door currently sources all of its whiskey, and while it will never be a solely Tennessee whiskey, Tennessee whiskeys made at the Nashville space will be a focal point in the future.