This month marks the annual arrival of Octomore, the super-peated scotch whisky from Islay distiller Bruichladdich. Octomore's 12th edition has three different expressions—12.1, 12.2, and 12.3. Three iterations within each release is the norm for Octomore, although some years have seen a fourth expression added as well. What is unusual this year is that all three 12th edition whiskies are being sold in the U.S. Normally the .2 is available in Travel Retail only, but this year Octomore fans stateside stand a far better chance of acquiring the full set.

What makes Octomore so special? For the uninitiated, a quick primer: When Bruichladdich Distillery restarted production back in 2001 after being shuttered since the mid-'90s, the non-peated Bruichladdich label was the only product. But there was a desire to make a peated whisky too, in order to mark the newly reopened distillery's Islay identity. Thus Port Charlotte was born. From there the inspiration flowed, and a plan emerged to create the world's most heavily peated whisky—Octomore, named for a lost distillery just down the road, and also sharing the name with nearby Octomore Farm.

Bruichladdich commissioned its malt supplier (Bairds Malt of Inverness) to deliver the most peated malt it could make. The results were astounding. Peat-fired barley contains phenols, which impart smoky flavors to a whisky and are measured in parts per million (ppm). The normal phenol level for most Islay whiskies is around 40 ppm—Port Charlotte's level, for example. The first Octomore, distilled in 2002, was made from peated malt measured at a whopping 131 ppm. Edition 1 of Octomore was released in 2008 to broad acclaim, and the cult of Octomore was born.

The early editions were issued somewhat sporadically, and it is only in recent years that Octomore has become an annual affair. But a key element of Octomore's allure is that each edition is different from the last. It is whisky's ultimate anti-brand—an expression that does not seek precision-calibrated sameness, but instead creates something slightly different each year. That is at least partly due to the nature of peated malt production itself. For normal peated whiskies, the first run in the peating process, which is the most potent, is blended with less peated malt to create a standard consistency. But Octomore uses only that first batch, which is never uniform.

“You can't really control things to get a specific ppm, because Octomore uses the uncut stuff,” notes Adam Hannett, Bruichladdich's head distiller. “It's always at least 80 ppm, but it could be 100 or 300, and then back to 100 the following year. While Port Charlotte is all about consistency—always at 40 ppm—Octomore is about pushing the boundaries."

With such imposing peat credentials, Octomore casts an alluring, yet almost intimidating figure across the whisky world. Even its name vaguely evokes some frightful persona from a James Bond film. But Octomore is no bruising heavyweight—it possesses all the subtlety and refinement of Bruichladdich's other expressions. The smoke notes are also less charcoal-like than some other Islay single malts, leaning more toward mellow woodfire. Despite all the hype surrounding the peat and smoke, the purity of the spirit remains Octomore's signature.

Here is a brief snapshot of this year's Octomore expressions, which are releasing this month. These whiskies will be scored and reviewed in our Winter issue's Buying Guide. 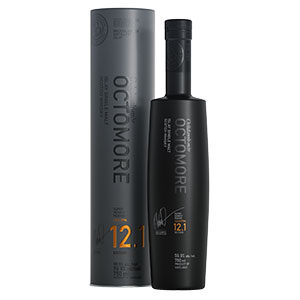 The .1 expressions of Octomore are always matured in bourbon casks, and play the role of the core expression within each edition, from which the others in the group branch outward. This one was aged 5 years in first-fill bourbon casks. While Bruichladdich probably experiments with more cask types than any other Islay distillery, its spirit is best suited for bourbon casks, which allow the spirit's refinement to emerge and bring forth notes of soft vanilla, caramel, toffee, lemon, honey, and spice. 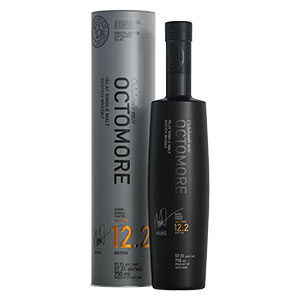 The .2 always focuses on cask exploration. For this one, half the liquid was aged in first-fill bourbon casks and half in second fill, and then in 2019 they were combined and refilled into sauternes casks to rest for 18 to 24 months. The sauternes casks leave a golden hue, provide subtle restraint to the smoke, and lend succulence to the whisky. Their influence coaxes out notes of melon, honey, and vanilla cookies, along with toasty hints of pain grillé. This is Octomore's first sauternes cask-finished expression since Edition 4, when Octomore 4.2 (also known as Comus) achieved major cult status. As noted, this year's .2 will be available in the U.S. for the first time since Octomore Edition 4. 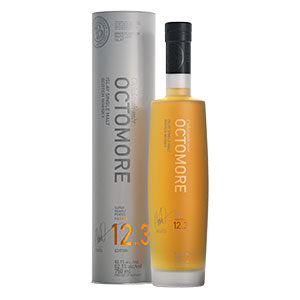 The 12.3 is made 100% from barley grown on Octomore Farm, located less than two miles from the distillery, where farmer James Brown has been cultivating barley for Bruichladdich since 2007. This expression was always all about exploring barley types, with the cask maturation kept consistent. But that has changed under Hannett. The 500-liter PX butts are from Jerez-based producer Bodegas Rey Fernando de Castilla, while the American whiskey barrels are from Buffalo Trace, Jack Daniel's, and Clermont Springs. Since Octomore Farm is not far from the sea, some tasters find subtle maritime flavors in the distillate. That's less true with the peat-heavy Octomore than with non-peated Bruichladdich, but some briny, citrusy notes still linger on the nose and palate, while the sherry influence brings out toffee, chocolate, coffee cake, and raisins. The .3 is the highest-ABV expression in Edition 12.
Scotch New Releases News Bruichladdich Peat dfleming