Scotland is undergoing a rye renaissance that has spiced up the debate about what can and cannot be produced in a Scotch whisky distillery. At least eight distilleries including Bruichladdich, InchDairnie, and Lone Wolf have been experimenting with rye, and while the spirit is aging in casks, distillers are busy scrutinizing the rules to work out how they can bottle it without falling foul of the Scotch Whisky Regulations, which dictate what can and cannot be labeled as scotch.

Single malt Scotch whisky must be produced from 100% malted barley and must be distilled on a pot still, while single grain Scotch whisky is usually made from a mixture of malted barley with either corn or wheat, though any grain can be used. The historical record indicates that distillers in Scotland were using rye in the 18th century, with greater quantities used to make grain whisky in the 19th and 20th centuries. Rye is not a major crop harvested in the UK these days, but rye plantings have increased thanks to tariffs paid to biogas producers, making more rye grain available.

But why begin distilling with rye now? Several trends may be supporting this movement: the popularity of rye whiskey in the U.S., often linked to cocktail culture; a feeling of frustration in some quarters over perceived limits to innovation in Scotch whisky; and—most intriguingly—a shift among producers to innovate early in the whisky-making process, by exploring raw materials and production at the distillery, rather than in the warehouse through cask maturation and finishing.

Among the Scottish distillers currently using rye, Arbikie Distillery in Angus was an early adopter; it began growing its own rye in 2014. “Our whole ethos has always been about field to bottle, so we can trace everything back to the field, the exact date, and everything that went into producing our various whiskies,” says director John Stirling. He recognized that no one else was using rye in Scotland, and set about making his own single-estate rye expression. “We wanted to look at the innovation that's behind rye, and how you've got to use slightly different techniques,” he says.

Rye, though, is harder to grow in Scotland than other cereal crops. “There's a microclimate where we're situated in Angus,” explains Stirling. “We're one of the driest areas in Scotland. That's the problem [with rye]—if it gets wet, rye grain binds together, and it's a big challenge to get it through the combine harvester.” Stirling suspects anyone growing rye elsewhere in the country will face greater risks of damage from inclement weather. “I'd love to see how Bruichladdich grows it on Islay,” he says. “That would be a challenge. I'd love to know how much they've harvested!”

While distillers often consider efficiency and alcohol yield when choosing grains, that wasn't the case at Arbikie. “Our main considerations when selecting the variety of rye were with regards to its agronomy and flavor,” explains Kirsty Black, Arbikie's master distiller. The distillery has the ability to process a variety of raw materials, from potatoes to wheat and malt, so rye was not an issue. Arbikie processes unmalted rye in a direct steam injection cooker and puts it through their mill, adjusting the rollers for the thinner rye grains. 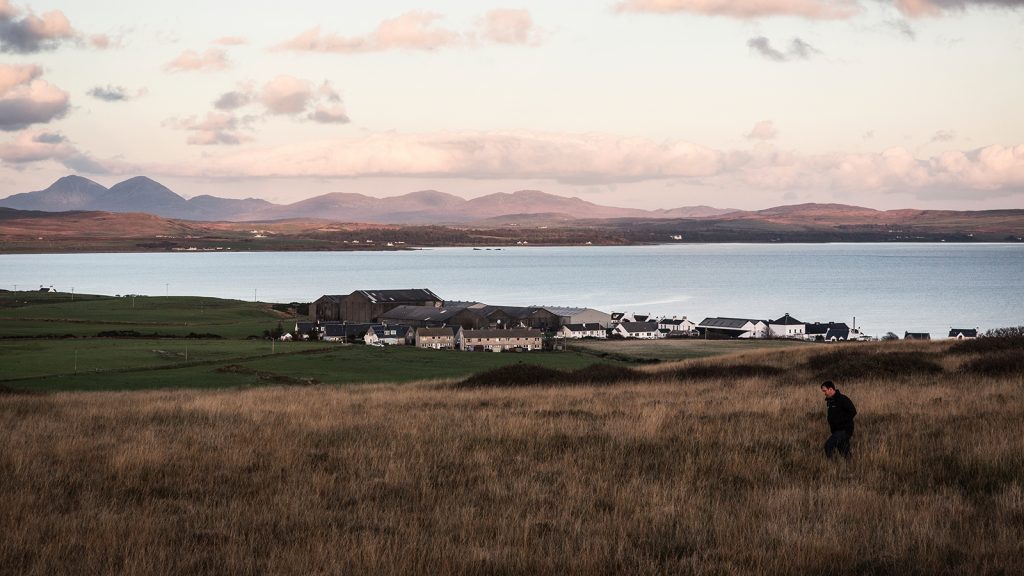 Bruichladdich is among eight Scottish distilleries experimenting with rye.

“We have tried a variety of different grain bills [for the rye whisky] utilizing the rye, wheat, and barley that we grow on the farm,” Black notes. Arbikie has produced two versions of rye: one “Scottish,” and one “American,” both expected to launch in the U.S. by the end of 2018. The Scottish version is a combination of 52% rye and 48% malted barley, while the mashbill for the American style contains more than 75% rye, with the remainder comprised of wheat. Without any malted barley, they need to add enzymes to the latter style to kick-start the conversion of starches to sugars. The practice is common in American distilling, but prohibited in the production of Scotch whisky. As Stirling explains, “You could never make 100% rye whisky here, but you could do a 100% rye version with external enzymes—you just couldn't call it whisky.”

As for wood selection, Scottish distillers including InchDairnie, Lone Wolf, and Bruichladdich appear to favor virgin oak for maturing rye. “A mixture of casks have been used, but predominantly we use new, heavy char, American oak,” says Black. “We feel the new oak enhances the spicy character that comes from the rye grain, along with some complementary oak tones. It's still early days, but our Scottish version has more herbal tones with malty elements, whereas our American style has more fruity and spicy flavors.”

Working with rye presents unique challenges for distillers more accustomed to distilling malted barley. Pete Robson, general manager for malt sales at Muntons, supplied the country's largest rye order for distillation at InchDairnie distillery in Fife, and explains the difference between malting rye and malting barley. “Rye doesn't have a husk; if you gave it the same steeping process as a barley, it would just come out like porridge,” he explains. Rye takes up water quickly in the malting process, so it needs careful handling with short wet periods and long air rests. Could a peated malted rye be produced, then? “You would be able to get some peat smoke flavor deposited on the surface, but probably not as much as with barley,” says Robson.

In the mash house, distillers rely on the barley husks to form a filter at the bottom of a traditional mash tun as the worts are drained off. When working with rye, most distillers need additional material to compensate for the lack of husks and act as a filter bed; common choices are rice hulls or oat husks. To overcome this challenge, InchDairnie crushes the rye to a powder using a hammer mill and then drain the worts through a mash filter, a piece of equipment more commonly found in breweries. The distillery is making all-malt whisky from a combination of 56% malted rye with malted barley.

Meanwhile, Bruichladdich on Islay distills with locally grown unmalted rye, which must be cooked first, then mashed with malted barley. “You need some high-enzyme malt to breakdown the starches in the rye and convert them to sugars,” explains Robson. Rye is prone to foaming up and over the tops of the fermenters, but InchDairnie uses a non-foaming rye species to better manage fermentation.

Scottish distillers working with rye must contend with the legal regulations, lest they spend time and effort making a product that cannot be sold as whisky. Before undertaking any distillation trials, InchDairnie's managing director Ian Palmer diligently researched the topic and presented his findings on the historical precedence of rye to the Scotch Whisky Association (SWA) to win their approval. When it's judged to be ready for release, InchDairnie's whisky must be labeled as a single grain scotch whisky. Though made of all malt at a single distillery, the use of malted rye means that it can't be labeled as single malt scotch. Only whisky made of 100% malted barley counts.

“You could never make 100% rye whisky here, but you could do a 100% rye version with external enzymes—you just couldn't call it whisky.”

After sowing his fields at Arbikie, Stirling chose to tend to his shoots first and answer questions later. Having distilled his rye spirit, he received a letter from the SWA's legal counsel inquiring about his intentions and reasons for using rye. Having grown all the grains, including the rye, Stirling objected to the SWA's letter, believing his spirit to be a more authentic Scottish product than a scotch whisky made using imported barley and corn. (Scotland does not grow sufficient malting barley to meet the needs of distillers). “What's the justification for corn use in whisky? It has never been grown in Scotland,” he says. Stirling wants to be open with consumers and plans to label his products with detailed information, right down to the name of the field where the grain was grown.

Stirling has an ace in the hole: “The good thing about it is….we're not SWA members,” he explains. Though Arbikie is bound to follow the legal framework of the Scotch Whisky Regulations when making products to sell, it doesn't necessarily have to respond to legal questions posed by the SWA. “We want to comply, and we do see the benefit of having strict and strong rules around whisky, but you've got to be careful not to stop any kind of innovation,” Stirling argues. When it comes to labeling Arbikie's rye distillates, Stirling knows the Scottish-style rye must be called a single grain Scotch whisky, but the naming of the American-style rye is still a work in progress. Currently, the favored plan is to call it American rye spirit and put the mashbill on the label. “We're not allowed to call it whiskey with an ‘e' because the SWA says that it could be mistaken for a Scotch whisky,” Stirling notes. “[But] we couldn't even call it “Not a Scotch Whisky”—that's how ridiculous [the regulations are].”

The SWA Responds to the Use of Rye in Scotch

Whisky Advocate asked the SWA to respond to questions on the use of rye in Scotland—in particular what is permissible and whether the rye revolution diminishes or enhances the reputation of Scotch whisky. The SWA's responses are printed in full below.

WA: Does the SWA have any concerns regarding rye use for whisky production in Scotland and the Scotch Whisky Regulations, given your endeavors to protect the distinctiveness of Scotch whisky, or are you supportive of the move?

WA: With regard to labeling, could any 100% rye or part-rye whisky produced in a pot still or column still in a single Scottish distillery be labeled for sale as a single grain Scotch whisky? Is 100% rye mash permissible in Scotland?

SWA: The legal requirements specifically require distillation from cereals. Over and above this, there is a requirement for those cereals to be traditional because it is those cereals which have been traditionally used for Scotch Whisky and which have contributed to the characteristics of Scotch Whisky upon which its reputation is founded. Rye is clearly a cereal and it has been traditionally used as part of the mash for Scotch Whisky. However, the definition of Scotch Whisky requires distillation “from water or malted barley (to which only whole grains of other cereals can be added)...” As some malted barley is required, a mash from 100% rye would not be a Scotch Whisky. Indeed, there is a prohibition on producing any other whisky in Scotland other than Scotch Whisky. The purpose of this is to prevent the existence of two “grades” of whisky originating from Scotland, one "Scotch Whisky", and the other "whisky—product of Scotland" or "whisky—blended in Scotland" which complies with the generic standard for whisky under EU law. The existence of two such “grades” of whisky produced in Scotland would make it extremely difficult to protect Scotch Whisky as a distinctive product.

WA: Is there an existing legal definition of a rye whisky having greater than 50% rye content in Scotland at present?

SWA: As for a part rye mash, that is not permitted for a Single Malt Scotch Whisky, the definition of which requires 100% malted barley. If rye is used as part of a mash produced at a single distillery such a product would have to be described as a Single Grain Scotch Whisky.

WA: Is a mashbill showing the types of grains and their percentages permissible on the label? Would the same labeling be permitted for these products being bottled for sale in the U.S. market?

SWA: We do not see any difficulty in principle with detailing the percentages of all the cereals in the mash on the labeling of a Scotch Whisky, subject to the labeling requirements set out in the SWR or TF, although we are not in a position to comment on US law.
Scotch jmccormick Dispatches Rye Scotch Whisky Assocation