Why do small whisky companies compete in the face of blending dominance by multinational corporations? What's their take on blending, and how does this differ from the major whisky brands? Which blends are deserving of your hard-earned cash? As blending is highly topical, Jonny McCormick speaks to blenders from three contrasting whisky companies to find out the answers.

To an aspiring whisky blender, the muscle of Dewar's, Johnnie Walker, and Chivas Brothers must seem every bit as imposing as biblical Goliath. These huge heritage brands, born from the successes of entrepreneurs in the late 19th and early 20th centuries, dominate not only blended whisky, but also the entire Scotch whisky industry. They are masters in the art of blending dozens of aged single malts and lighter grain whiskies into incredibly complex and consistent whiskies on a grand scale. Add to this skill their marketing prowess, daunting stocks of maturing whiskies, and global name recognition, and they are the definition of well-armored competitors. What entrepreneur would ever wish to be the David to face such a seemingly insurmountable foe? A very smart one indeed.

Try It: The Best Blended Scotches From Small Producers

The shepherd boy who toppled Goliath was not a helpless underdog, but a scrappy adversary, confident in his own strength and skills. Just as David wisely shed his weighty armor and reached for a sling in place of a sword, these blenders are proving themselves to be more agile than the mighty corporations. Equipped with innovative and distinctive whiskies, they have challenged blending conventions to hit them squarely between the eyes. These blenders may be small, but they are determined to fight the battle on their own terms.

Master of Malt is an online retailer of alcohol beverages, spirits distributor, and independent bottler with a fearless, maverick spirit. Sales director Ben Ellefsen recalls the market for blends before their Lost Distilleries blends entered the arena in 2012. “From my perspective, there were a lot of very welcome, good quality, consistent blends from the big boys such as Diageo and Pernod Ricard,” he says, referring to the corporate owners of Johnnie Walker and Chivas Regal. “There wasn't really anything that excited me as a consumer though. There was stuff that excited me from Compass Box, Douglas Laing, and others, but when it came to the big boys it seemed to be, ‘Here's our mass market, ten-million case stalwart, and every so often we'll give you something a little bit exciting, a little bit special, but by God, you're going to pay for it.'”

At the turn of this century, whisky drinkers were more clearly divided into separate camps of blend and single malt drinkers. Compass Box Whisky Co. has arguably done more than anyone else to break down those barriers. After more than fifteen years in business, they have had a discernible influence on the current whisky scene: no age statements, natural color, no chill filtering, full disclosure on recipes, the blending of single malts, more talk about wood and its effect on maturation, not to mention their idiosyncratic approach to branding. “The great thing about blending is it's a platform for creativity,” says John Glaser, founder and whisky maker. “In the world of Scotch whisky, ‘blend is bad, single is good,' but we know across the industry that that's never been the case. We wanted to make Scotch whisky more relevant, more compelling, to more people around the world. That's our business mission, always has been.” 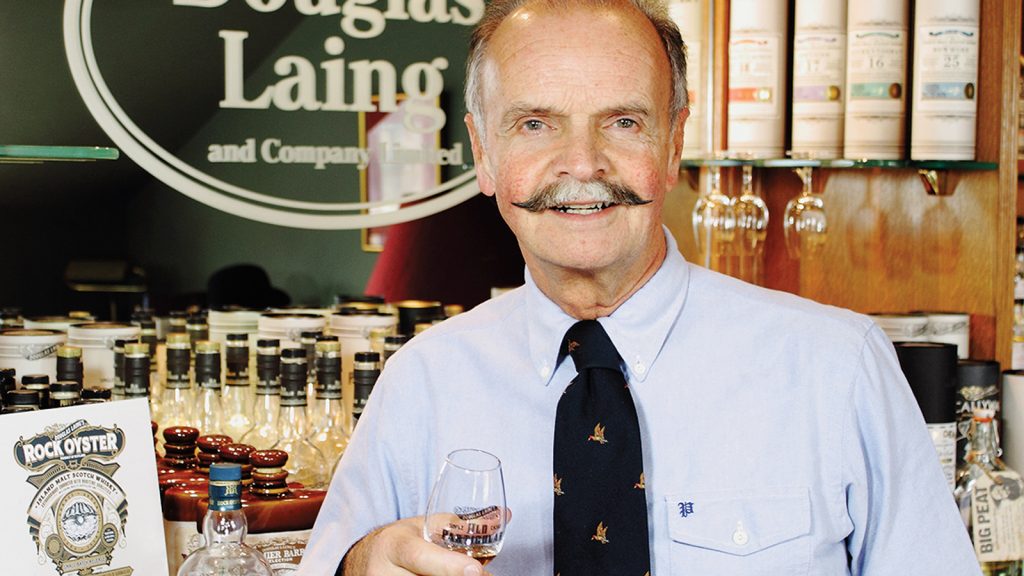 Fred Laing has seen the rise and fall of blends over his long career.

Back in 1948, Fred Laing's father formed Douglas Laing & Co. in Glasgow with a handful of pre-war casks and a blended whisky brand called King of Scots. Stocks were laid down through filling programs established on a handshake during those entrepreneurial post-war years. King of Scots grew in popularity over the next 30 to 40 years, the company becoming recognized as a premium blender of aged Scotch whisky in Asia, the U.S., and South America. Their territorial success in Asia left them exposed to seismic economic changes, and when the market contracted sharply, Douglas Laing & Co. had to devise a new plan, and quickly. “We had these wonderful casks of whisky for blending, but ultimately no home for them,” laments Fred Laing, the managing director. “The last four years of the 1990s, the market just slowly disappeared, it was quite horrific for us, so we had to reinvent ourselves. We started to release our old Port Ellens, old Ardbegs, and old Laphroaigs, which were in my father's blending stock.” Douglas Laing rapidly established themself as single cask specialists.

After years of single cask success Douglas Laing & Co., in its modern guise, has come full circle and returned, almost unintentionally, to blending. “The first reason to develop Big Peat in 2009 was because I had identified an excess of Islay stocks,” says Fred. “This particular group of Islays were too young in my opinion, perhaps wrongly, to put them out as singles. I put them into a vatting, I thought I would have a bit of fun with the packaging, and that became Big Peat. Little did I know that it would grow like topsy, and that we would have to add to our filling program on Islay in order to sustain it!”

At Master of Malt, Ellefsen is the first to admit that, unlike John Glaser, they did not start out with an overarching mission to change the world. Rather, they were presented with opportunities to acquire some incredible parcels of whisky, and they knew exactly what to do with them. They began to sell them through their different lines including That Boutique-y Whisky Company, batches of the Lost Distilleries Blend, and their award-winning Golden Age Blend. “It's all driven by the fact that we've got access to stock and then creating the best that we possibly can from that stock,” says Ben. “That's an important point of difference between us and the big brands and it's also an important point of difference between us and John and Fred: we're not blending back to a specific profile.” Without the marketing budgets for advertising and sponsorship to match the big blended brands, Master of Malt gets the word out quickly by sending samples to key reviewers and engaging with consumers across different social media channels.

John Glaser's message is pure and simple. “It's getting people to leave their associations about blend versus single at the door and just try the whiskies,” he says. “Judge them on whether you like them. Judge them on the merits of the whiskies. When they say, ‘Wow, I really like that,' they sometimes don't know what they're drinking. ‘It's a blended malt,' we explain. [Indignantly] ‘What do you mean it's a blend?' That's the conversation we've had at whisky festivals thousands of times over the years.” 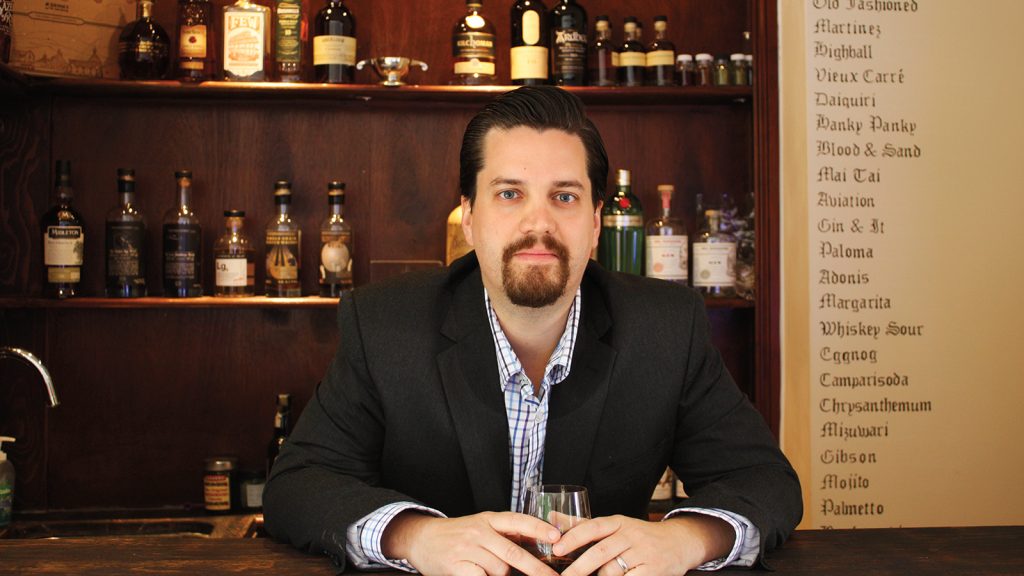 Ben Ellefson, sales director for Master of Malt, is an amateur chef and a self-taught blender.

Fred Laing acquired his blending skills during apprenticeships in the late 1960s and early 1970s; first under Major Hartley Whyte and Alastair Hart at Whyte & Mackay, then with Gardner Ferrier at White Horse Distillers, before joining his father at Douglas Laing in 1972. There, he honed his blending skills while his father was on the road selling their blends. Following Big Peat, Fred and his daughter Cara Laing, director of whisky, developed more blended malt whiskies, including Scallywag (Speyside), Timorous Beastie (Highland), Rock Oyster (Islands), and the Epicurean (Lowland) in their Remarkable Regional Malts range. “For us, and this will perhaps be quite different from the bigger players, we've got great stocks, but we're not the largest company in the industry so there are restrictions,” says Fred, explaining how he begins to put together a blend. “We look at our stock profile to find the malts of which we have excess stock and see if they will work in tandem. I think I was probably the first blender to show some of his distillates on the packaging,” admits Fred. “The main label of Big Peat lists how it contains malts distilled at Ardbeg, Bowmore, Caol Ila, and Port Ellen. As the blender, we're offering the whole orchestra within the blended category, not just a single violin. This is just where you stick your neck out. While the big guys will take samples to Joe Public to taste and opine on, we tend to make a call on it and if I like it personally, we just sink or swim by it. Touch wood, we haven't sunk yet.”

The recipes of the blends from Master of Malt are the responsibility of Ellefsen. How did he acquire his blending skills? “Self-taught, to be honest. I've always been a keen amateur chef and I've got an instinctive understanding of flavor. I make sure I taste everything that we do, everything that is put out under our labels, and work by instinct to create things that I think are good for me personally, and hope that other people share my tastes.”

“I start with the ingredients and I think, right, how can I make that delicious?” begins Ellefsen. He might start with a light, well-aged grain, and add a single malt to boost the flavor profile. “I'll add to it, and I'll add to it again, and I'll keep adding to it until it peaks. That's a totally different approach to a big company, because they don't necessarily start with the stock and seek to find a way to present that in the best way possible. They start with a brief for a product and then seek to create that product.” Ellefsen encourages everyone to attempt some amateur blending at home, “I keep a decanter on my bar at home that is full of whisky samples and it's pretty good.” He's careful to only add really great whiskies to his house whisky before leaving them to marry for several weeks. The only other self-imposed limit is the addition of peaty whiskies. “If it's heavily peated, I want that to a maximum concentration of two to five percent. That's my main advice to people wanting to try home blending, a little peat goes a really long way.” 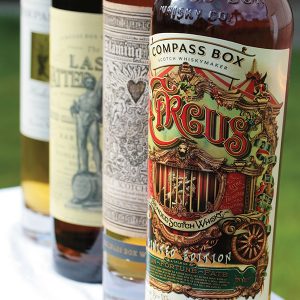 John Glaser came to Scotch whisky from a background in organoleptic assessment in the wine business. When he moved to London to take on new product development for a major drinks company, he worked with highly skilled blenders in the industry, including Diageo's Maureen Robinson and Jim Beveridge.

“Many blenders come from technical and scientific backgrounds,” says John. “That gives you an understanding of chemistry and the science behind whisky, whisky making, and whisky maturation, but I think blending is something that's learned intuitively.” At Compass Box, it all starts with an idea for a style. “Remember, when we talk about blending, we could be talking about blended scotch, blended malt, or we could be talking about blended grain,” explains John. “For us, a decision doesn't start with should it be a malt, should it be a grain, more like, should we have great whisky? Sometimes we set out to make a blended malt and we end up with a blended Scotch whisky, because adding this grain to that recipe of blended malt whiskies really improves it.”

The smaller companies have succeeded in bringing out blends tailor-made for discussion, provocation, and pleasure. They are being created for us to savor by whisky prodigies, whisky virtuosos, with blending mastery passed down the family line. They've brought new excitement to blended whisky, which has had slowly eroding sales for decades, with 2015 marking a new low for sales in the U.S. In this David and Goliath tussle, the small companies are changing attitudes through educating whisky drinkers, dialing up the fun, and carving out their own path to success. The Goliaths would be wise to not underestimate the future that stands before them.