Think of whisky, and the places that come to mind are the rugged Scottish Highlands or Kentucky's rolling green hills—definitely not the snow-covered Alps. Yet one of the world's most exciting whisky scenes can be found in land-locked Switzerland. The country prohibited distilling grain until 2008, but its wealth as both an international banking capital and a winter playground has created opportunities to sip and stock up on top-quality, rare, and esoteric whiskies just about everywhere. From high-end hotels to bars both big and famously small, there is an impressive whisky cache to discover.

The Bernina Express terminates at a train station in St. Moritz, discharging travelers to the right, where chauffeurs line up to ferry them to century-old grand hotels looming large in the dramatic Alpine landscape. The lobby bar at the nearby Carlton Hotel is home to the strongest whisky list in this pedigreed enclave, offering 100 prized pours with an emphasis on scotch, including a 1981 Glenmorangie Pride 28 year old at CHF1,000 for 4 cl. However, not all guests linger between the lobby's twin fireplaces. Bar manager Martino Saldi, a veteran of the American Bar at London's Savoy Hotel, recalls the night "a guest bought a bottle of Highland Park 30 year old (costing around $3,000), took two shots in front of me, then finished off the bottle downstairs at Da Vittorio," the Carlton's two-Michelin Star restaurant. He notes that more disciplined regulars keep their purchases, like a 1968 Glenbury Royal 36 year old, locked in a glass display case beside the bar, poured at request when they're in residence.

Far below-on the literal wrong side of the train station's tracks-lies the Waldhaus Am See, a rustic lodge on a frozen lake, owned by the Eastern Swiss Dairy Farmers Association. The draw here is not the spare accommodations but the bar. The Devil's Place is the vision of hotel director Claudio Bernasconi, who discovered a taste for whisky early in his career, in India, where he was instructed to brush his teeth with the spirit rather than the local water. His enjoyment clearly grew, and at times he has held Guinness World Record for the largest commercially available whisky collection, offering more than 2,500 unique expressions spread across a maze of bar rooms that lead to a restaurant featuring live traditional music and an all-you-can-eat salad bar.

At The Devil's Place, which is favored by locals for its egalitarian service, the rarities include a 1984 Karuizawa 29 year old, the 1981 release of Macallan Royal Marriage containing whisky from 1948 and 1961, and an unopened Highland Park 50 year old, only available to the customer who buys the first five pours. These drams are among the most expensive on the list, but there's something for every budget, like a 2009 Aultmore 10 year old released by the independent bottler Signatory in celebration of White Turf, an annual horse race on the frozen lake outside. In the lounge, a wall of cases displays every release from Signatory, dating back decades to when Signatory owner Andrew Symington held his wedding at the hotel. 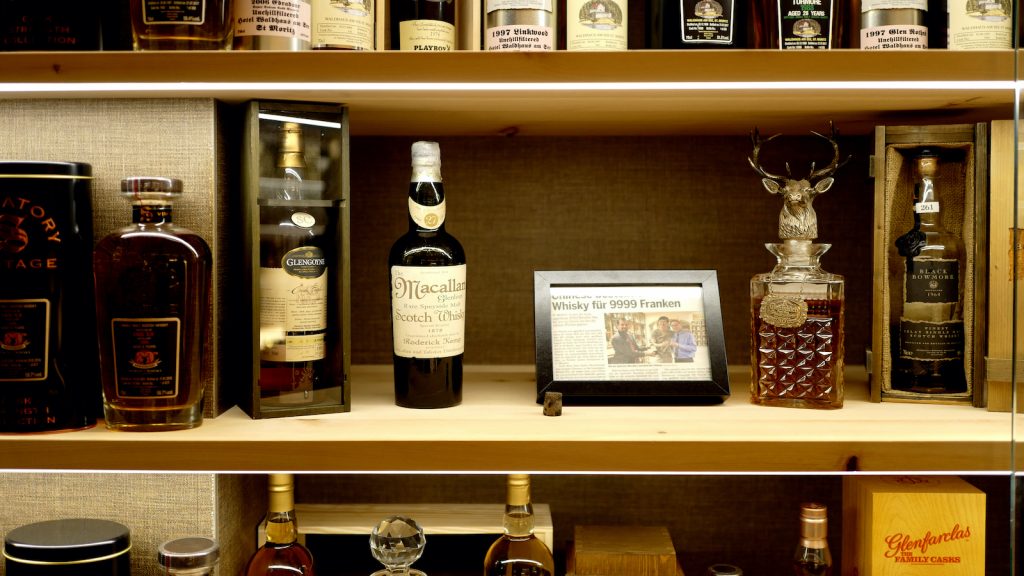 The Devil's Place sold a dram of this Macallan for nearly 10,000 Swiss francs before it was revealed to be fake. The bar made amends to the customer and no longer sells whatever is contained inside.

There's only one bottle on display in the lounge that's not on the menu: an infamous bottle of 1878 Macallan the hotel once opened for a visiting Chinese connoisseur. Three years ago, a single pour was sold for CHF9,999, but the story soon became tabloid fodder when the bottle was proven to be counterfeit. Chef de bar Gianni Arne recalls, however, that the bar was praised for its handling of the situation. “Mr. Bernasconi did everything right, from an independent carbon dating to flying to refund the grateful patron.” Bernasconi's efforts have instilled trust and loyalty in The Devil's Place patrons. There's even a wall of fame where customers' portraits are hung after sampling 100 pours; gold frames encase those who have sampled 1,000.

From St. Moritz, it's possible to move on to another Guinness World Record holder, the Smallest Whisky Bar on Earth. On the main street in Santa Maria Val Müstair, a small Alpine village near the Italian border, Lord Gunter Sommer holds court behind a five-stool bar open only on weekends and by appointment. Unlike most of Switzerland's best whisky bars, Sommer's serves no other spirits here, to make room for more than 200 expressions, including those from his nearby High Glen Distillery, where he employs a patented "Double Cask Single Wood" barrel-aging process that matches staves from one cask type—say, Pedro Ximénez—with heads from another, like an ex-bourbon barrel.

“People don't often want to invest in casks this way,” Sommer says, explaining that the Frankensteinian mashup of woods infuses his whisky with twice the flavor in half the time. He frequently drives back and forth between Switzerland and Scotland to collect the casks, made by Speyside Cooperage according to his designs.

At the Smallest Whisky Bar on Earth, Sommer mainly offers single malt scotch, including curiosities like a Bruichladdich 7 year old, aged in a cask assembled from sherry wood staves and American bourbon heads—a special edition bottled for Scottish crooner Robin Laing, who recorded an original song about the journey through the mountains to his friend's bar.

The country's more cosmopolitan whisky bars can be found in Zurich, including The Widder Hotel, with its 14-page whisky list and 1,500 spirits, and Old Crow, a neighborhood bar around the corner owned by longtime Widder bar manager Markus Blattner. Old Crow features 900 whiskies culled from Blattner and his partners' personal collections, like a vintage Old Crow (CHF15) in what resembles a plastic mouthwash bottle, and several single casks, including a 1991 Heaven Hill 22 year old (CHF75) and a 2008 Wild Turkey 8 year old (CHF53) chosen by the European Bourbon & Rye Association, a group of impassioned local collectors who have been selecting barrels for the past decade—most recently acquiring rye, bourbon, and wheated bourbon barrels from Lebanon, Kentucky's Limestone Branch Distillery.

“Switzerland is an interesting market—single malt has been around here since the 1990s when the Widder opened, and back then selling a whisky for $50 was outstanding,” Blattner recalls. “When we built the hotel's collection it was a huge process just to buy a bottle, justifying to management how we might sell it.” Now that the market has evolved, he sees bourbon as a new challenge. “We sell it in cocktails mostly, in Manhattans and Old Fashioneds,” he says, describing the ache in his hands from mixing drinks until last call on a Saturday night.

Bourbon is also on the menu at Burgenstock, a cluster of luxury hotels overlooking Lake Lucerne, known for its mountain air and seclusion. Burgenstock's Waldhotel building is devoted to "medical and wellness excellence;" however, staff won't stop guests from visiting the smoking room at the Lakeview Bar & Lounge next door, where it's possible to pair a Patoro cigar with Balvenie 40 year old (CHF600), or even Balvenie 40 year old Batch 5 (price on request). The historic hotel also recently discovered an archive of bourbons in its off-site storage (alongside such eclectic items as a fire truck and some parasol umbrellas), which it anticipates offering once they're catalogued.

When a hotel has a smoking room, the best whiskies are often found there. The Alpina Hotel in Gstaad is best known for the contemporary art collection that lines its corridors, but the subject matter shifts to framed whisky bottles locked in glass display cases as guests approach the Cigar Lounge, where a bottle of Glenfiddich 40 year old (price on request) stands sentry outside the door.

Several of these bars have online shops, including The Smallest Whisky Shop on Earth, and World of Whisky, but an in-person visit means that, when flying home, you can experience the 28/10 Whisky Club at Zurich airport. The Waldhaus Am See's Claudio Bernasconi curated its list of 200 international whiskies, from Scotland's Oban to Taiwan's Kavalan, all complimentary to enjoy, so that even as you're leaving Switzerland, you can experience a taste of grandeur.
Scotch Dispatches Travel Whisky Life Bourbon arobb