Planning a trip to New York City—the Statue of Liberty, Broadway, museums, the Empire State Building, Central Park, shopping on Fifth Avenue, and world-class dining? Why not add distillery visits to your itinerary, and head to Brooklyn? The borough is home to a burgeoning whiskey scene, with innovative distillers making bourbon, rye, and malt whiskey, while others experiment with rice, apples, and wormwood. Making whiskey isn't easy, but distilling in an urban setting like New York is particularly challenging since distillers must navigate various building regulations and stringent laws governing manufacturing sites, all while working in a tight space and respecting the surrounding neighborhood. Yet a group of industrious distillers has surmounted these challenges and is making whiskey and other spirits in the city that never sleeps. These places began cropping up around a decade ago, and since then have multiplied.

New York City's modern whiskey-making movement arguably began in 2010 with Kings County Distillery, which lays claim to being the city's first legal whiskey distillery since Prohibition. “I believe we were the first [whiskey] distiller to have our federal license, state license, and to actually begin production under the farm distillery license [on] April 15, 2010,” co-founder and distiller Colin Spoelman says. “There is a Chinese rice wine manufacturer in Brooklyn that preexists us with a distilling permit, so safest to say [Kings County is the] first whiskey distiller” in New York City in a long time, he adds. Following changes in state laws that made it easier and less costly to start a small distillery, Kings County began production in a 325 square-foot room in East Williamsburg before moving to the Brooklyn Navy Yard in 2012. Spoelman, a Kentuckian who “grew up loving bourbon,” tries to “take the best from every distilling culture and make something totally different,” like Kings County's peated bourbon. The distillery offers tours Wednesday-Sunday with tastings on Wednesdays and Fridays at 7 p.m., which visitors can reserve via the website or, in lieu of a tour, flights and cocktails in the Gatehouses tasting room. 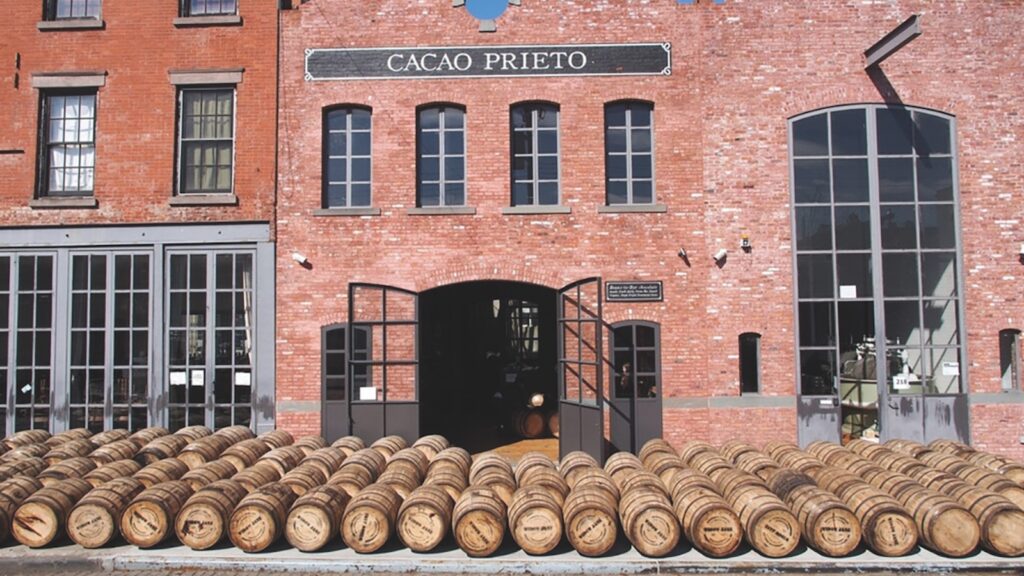 Head four miles south along the waterfront to Widow Jane Distillery in Red Hook, where in addition to the distillery's own-make whiskey, president and head distiller Lisa Roper Wicker draws from a well of aged stock in Kentucky, Indiana, and Tennessee. Widow Jane, which opened in 2012, aims to begin construction on a new facility in late 2022, a 15,000-square-foot distillery and visitor center “enabling us to lift production…significantly,” Roper Wicker says. “We are projecting several thousand barrels a year, making rye whiskey and bourbon with our proprietary Baby Jane heirloom corn. This is part of our strategy to repatriate more whiskey making to New York. Currently our distilling on-site runs at full capacity and is only able to produce a few hundred barrels a year.” In the meantime, the distillery is open seven days a week offering, public tours Friday, Saturday, and Sunday and private tours by appointment during the week. If you can't make it for a tour, stop by the distillery's bar, Botanica, for a cocktail or flight.

A 10-minute walk from Widow Jane, Van Brunt Stillhouse, which also opened in 2012, distills whiskey from grain purchased from an organic farm upstate in Newfield. “We create our own [mashbills] using brewers' malt,” distiller and co-founder Daric Schlesselman says. “Because of that, our whiskeys tend to have a little more depth and complexity right off the still.” Van Brunt offers Saturday afternoon tours (limited to 10 people) that include a tasting of the distillery's four core whiskeys plus one limited release. The bar and tasting room are open seven days a week.

From Van Brunt it's about a 10-minute taxi ride to Breuckelen Distilling, where founder and distiller Brad Estabrooke offers tastings by appointment. The distillery's 6 year old Brownstone Malt (Batch 1) scored 93 points in Whisky Advocate's Buying Guide for its “enchanting” flavor profile. The distillery, which began production in 2010, also offers a range of core whiskeys Estabrooke describes as “approachable and easy-drinking,” including 77 bonded rye, produced using a Coffey-style still and aged in 53-gallon barrels for a minimum of 6 years.

Head south on Third Avenue to Fort Hamilton Distillery in Industry City, the historic shipping, warehousing, and manufacturing complex in Brooklyn's Sunset Park neighborhood, where bartender turned distillery owner Alex Clark makes rye whiskey from a mashbill of 90% New York rye and 10% malted barley. “We age, blend, and bottle all of Fort Hamilton's whiskeys on-site. Distilling is scheduled to begin in December,” pending the arrival of the distillery's new still. “It should have arrived already, but supply chain issues have been messing with the delivery date,” Clark says. In the meantime, Clark has been distilling Fort Hamilton's whiskeys at Taconic Distillery, “our partner distillery” in Stanfordville, New York. Clark—who cut his teeth behind the bar at East Side Company Bar and Balthazar restaurant, and later worked as Widow Jane's sales director—hasn't forgotten how to stir a cocktail. “That's how I ended up doing what I do—from falling in love with the American classic cocktail canon to [helping to launch] Widow Jane, and then deciding I wanted to focus on rye and bring it back to life,” he says. “Fort Hamilton is the culmination of that.” Reserve a tour and tasting (currently limited to 12 people) via the website, or just walk in for a flight or cocktail. Try an Old Fashioned made with Fort Hamilton's Double Barrel rye, bourbon barrel-aged maple syrup, and black walnut bitters. 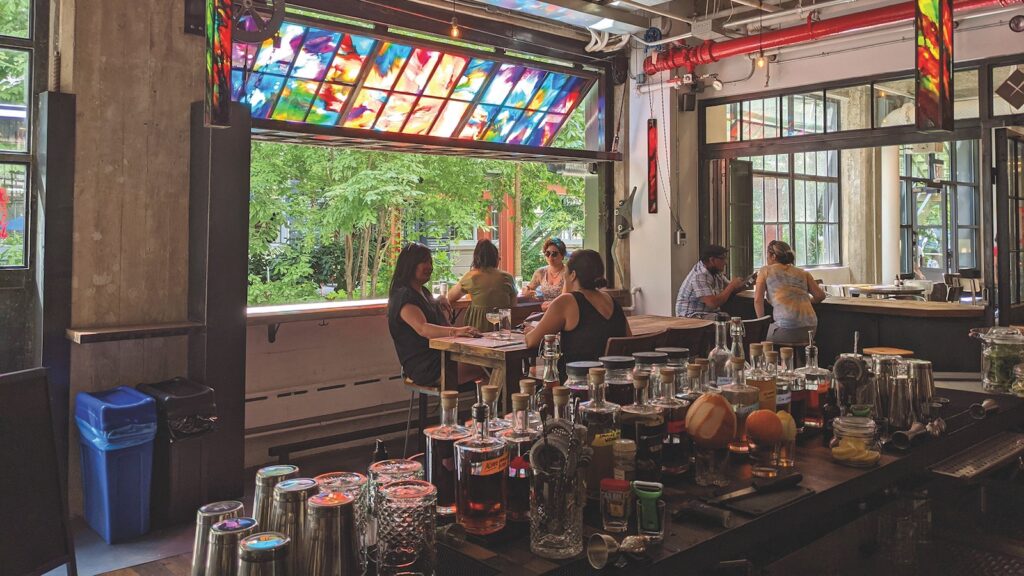 Sample a range of wormwood-based spirits in the Standard Wormwood tasting room.

Before leaving the Industry City complex, head to Standard Wormwood Distillery on the ground floor, which, true to its name, produces a range of wormwood-based spirits. Standard Wormwood opened in 2012 in Brooklyn's Bedford-Stuyvesant neighborhood before moving operations in 2019 to Industry City, co-founder Sasha Selimotic says. The distillery doesn't offer tours, but visitors can try Standard Wormwood's rye (not technically whiskey because it isn't aged in oak containers, but good in a Sazerac nevertheless). There is also gin, amaro, and other spirits. The tasting room bar, which offers a full view of the distilling system, is open Thursday through Sunday.

Trek east to Bushwick (about an hour by subway or 45 minutes by car), where motorcyclist/distillers, and Môtô Spirits co-founders Marie Estrada and Hagai Yardeny make rice whiskey and Jabuka, a spirit distilled from apples and rice. The distillery's name—and the rice whiskey they produce—was inspired by motorcycle trips Yardeny took in Vietnam before he and Estrada began commercially producing spirits in 2016. “It was the hospitality, meeting people who were making this thing called rice wine, which was actually a distilled spirit, and I think he fell in love with it—the relationship between what he was tasting and people welcoming him into their homes,” Estrada explains. Email info@motospirits.com to schedule a tour and tasting or visit the tasting room, which is open Wednesday through Sunday.

Hike or taxi a mile north to Interboro Spirits and Ales in East Williamsburg, where co-founder, brewmaster, and distiller Jesse Ferguson can suggest a high-octane Boilermaker that pairs Interboro's malt whiskey or amaro liqueur with a hoppy pilsner, hazy IPA, or decadent stout from an extensive draft list. Interboro laid down its first barrel of whiskey soon after opening in 2016. That whiskey is still aging, but the distillery recently bottled barrel No. 4—straight malt whiskey aged in first-use American oak for three years and then finished for one year in bourbon barrels—in May 2021. The tasting room is open Tuesday through Sunday for ticketed tastings, flights, cocktails, and food. 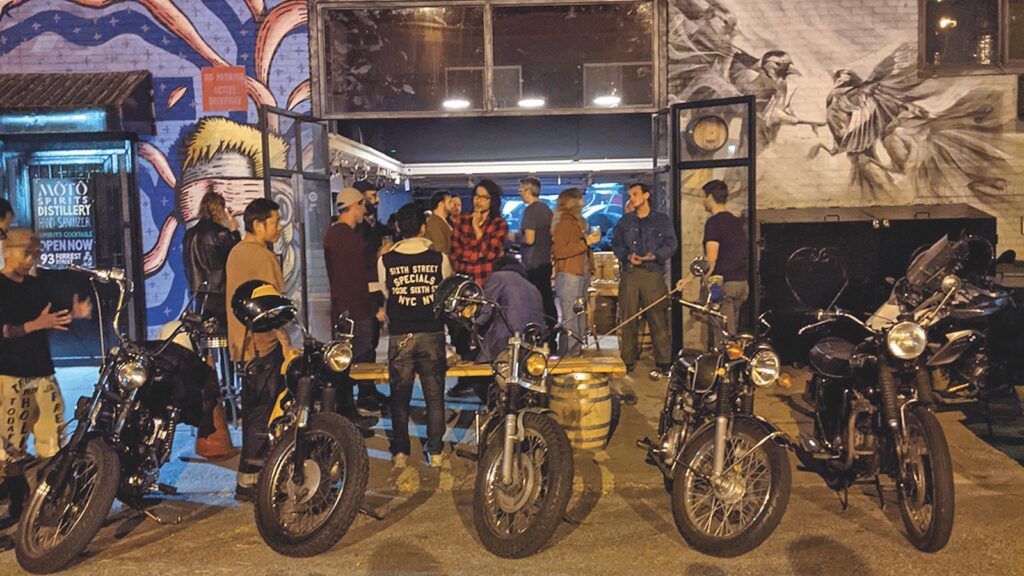 Môtô Spirits in Bushwick offers rice whiskey and Jabuka, a spirit distilled from apples and rice.

End your day at New York Distilling Co. in buzzing Williamsburg. This distillery is beloved among local spirits enthusiasts for its Ragtime rye, Dorothy Parker gin, and Perry's Tot navy strength gin. “Our sole whiskey focus is rye whiskey,” owner and distiller Allen Katz says. “Part of that is a bearing of New York history and American history, and an agricultural interest in growing rye in New York state. Another part is having the patience to consider the time frame not just to make whiskey, but to age and blend it.” Order a pour of the distillery's single barrel rye at the on-site bar The Shanty. New York Distilling Co., which opened in 2011, doesn't currently offer tours, but The Shanty serves cocktails, flights, and snacks.

Finally, look out for Arcane Distilling's relaunch, slated for early 2022. CEO Brian Thompson notes that construction is underway on a new facility in Bushwick to produce its beer-based, vacuum-distilled whiskeys on a larger scale. Arcane previously operated “out of a corner” at Interboro's facility, Thompson notes.