This article was originally published in March 2020. COVID-related restrictions may affect some of the opening times and offerings of these venues, so check in advance of a visit.

No city shares a greater affinity with rye whiskey than Baltimore. Locals remained loyal to Maryland's Pikesville rye even long after the brand moved to Kentucky's Heaven Hill Distillery in 1982. The city is also the epicenter for the revival of Maryland-style rye, which is distinguished by a significant portion of corn, anywhere from 15% to 45% of the mashbill, giving it a lighter, sweeter taste. Its reemergence is a sign of Baltimore's, and Maryland's, return to the East Coast's whiskey-making vanguard.

Like rye playing second fiddle to bourbon, there is an underdog quality to Baltimore, living in the shadow of Washington, D.C. “We're excited to show the world what sort of spirits Baltimore is creating, and return the city to its rightful place in the pantheon of world booze meccas,” says Max Lents, founder and CEO of Baltimore Spirits Co. “No other city deserves to be ground zero for world-class rye whiskey.”

During your Baltimore stay, consider anchoring yourself at one of the fine hotels near Inner Harbor. Four Seasons and Royal Sonesta put you right on the water, while the Hampton Inn and Hotel Indigo place you closer to non-harbor attractions Oriole Park and the Walters Art Museum, respectively.

Wherever you stay, you'll want to seek out the sense of community and support shared among local Baltimoreans and nowhere is that more evident than at Union Collective, a 155,000-square-foot former Sears warehouse. Since its opening in 2017 the Collective has curated independently owned businesses—from a rock climbing gym to an ice cream shop—to form a massive one-stop attraction. 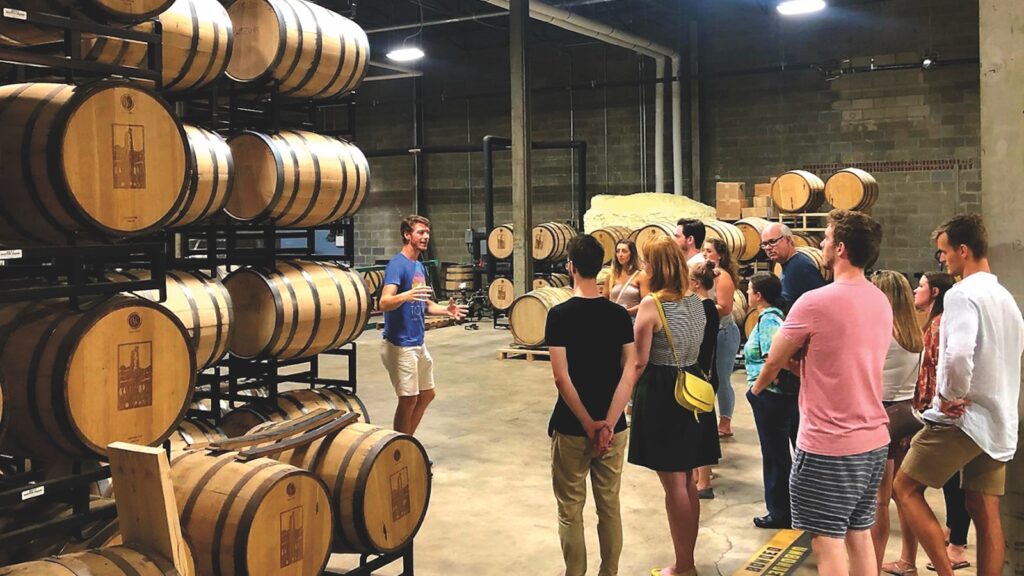 Catch a free tour in the warehouse-like space of Baltimore Spirits Co. before enjoying a drink at the on-site bar.

As far as cities go, Baltimore is relatively small, so getting around either by car or scooter is fairly inexpensive. The Charm City Circulator offers free bus rides around the central business district until midnight on Friday and Saturday, and 8 p.m. otherwise. Or grab an Uber or Lyft out to the Hampden neighborhood for The Food Market, which features a lengthy brunch cocktail menu and rib-sticking fare you can wash down with a pancake shot—whiskey, butterscotch, and orange juice chaser. Woodberry Kitchen is also nearby, with a drinks list that features several locally produced spirits.

If you choose to go straight to Union, you can grab a hot cup and a pastry at Vent Coffee Roasters. Union Craft Brewing occupies the largest space in the industrial strip, the outdoor area filling with clusters of dogs and their two-legged companions in the summertime. The taproom has an extensive beer list as well as the fully operational Well Crafted Kitchen.

Now you're ready for whiskey. Head next door to Baltimore Spirits Co., a warehouse-style distillery offering free tastings of any four spirits. Its Epoch straight rye was the first to be distilled in the city proper in at least half a century and is released in batches throughout the year, only at the distillery. Other spirits on offer include gins, apple brandy, a trio of amari, and more. The tasting room is open Wednesday to Saturday from noon to 8 p.m., and Sunday from noon to 6 p.m. Free tours are available every hour on Saturdays from 1 p.m. to 5 p.m., with a cocktail program on the horizon. “To our mind, we're creating the spirit that Baltimore deserves and one it can be proud of,” Lents says.

Blue Pit BBQ & Whiskey Bar is less than a mile away from Union Collective, easily walkable, and well worth the trek. Plus, it's dog-friendly and open until 2 a.m. seven nights a week. The expansive selection of American whiskey includes multiple bar picks of Four Roses single barrel ($12 each), a Buffalo Trace single barrel ($7), and a slew of other reasonably priced drams, some starting at just $5. The barbecue includes a brisket rubbed with local favorite Zeke's Coffee, and bourbon-glazed St. Louis pork ribs. Since you're in the northern part of the city, hit up The Wine Source, about a five-minute drive away, touted for its overall selection of spirits, wine, and beer and knowledgeable staff. 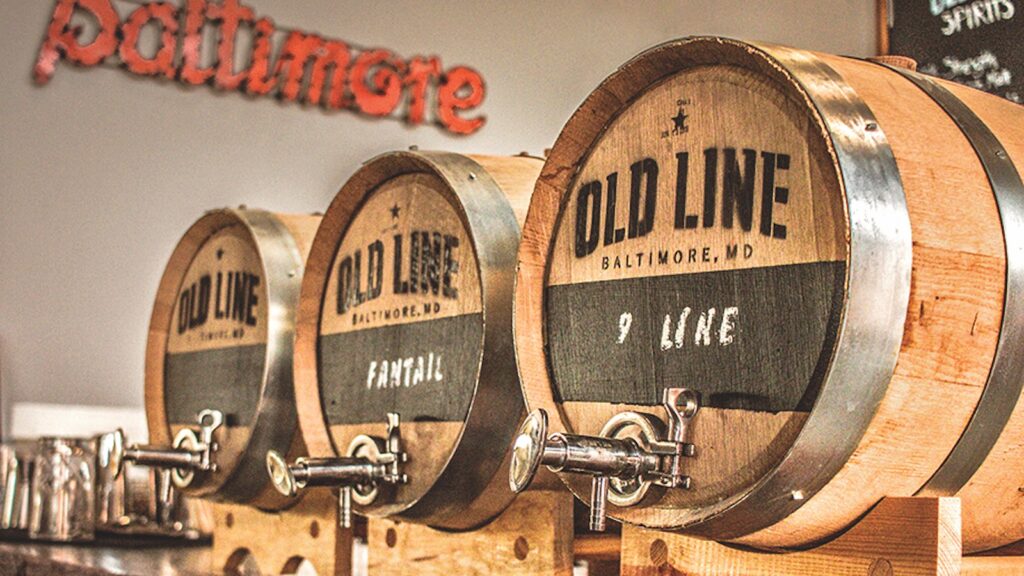 Fueled up on barbecue, grab a rideshare to Old Line Spirits, where two Navy vets are making American single malt and sourcing Caribbean rum. The Ready Room doubles as an event space and cocktail bar where guests can sip drinks, both classic and creative, including a rotating barrel-aged cocktail. Tours and tastings for $5 a person are held on Saturdays on the hour from noon to 5 p.m.

Monument City Brewing, founded by brothers Ken and Matthew Praay and named after one of Baltimore's many nicknames, is just a six-minute walk away. The bar's tap handles are custom made by nearby woodworking studio Mark Supik and Co., with events like live music and Ravens watch parties filling up its monthly calendar.

Finish your night with drinks near the harbor, where a number of bars offer plenty of great whisky, like Barfly's list of more than 400. The Elk Room puts a modern spin on the speakeasy concept with a scannable cocktail soundtrack. And the plainly named Rye—its neon sign a beacon for whiskey-seeking night owls—delivers, with multiple rye cocktails, Monument City's Rye IPA on tap, and Roots Radicals, a Boilermaker that pairs rye whiskey with Cardamaro and Belgian ale. 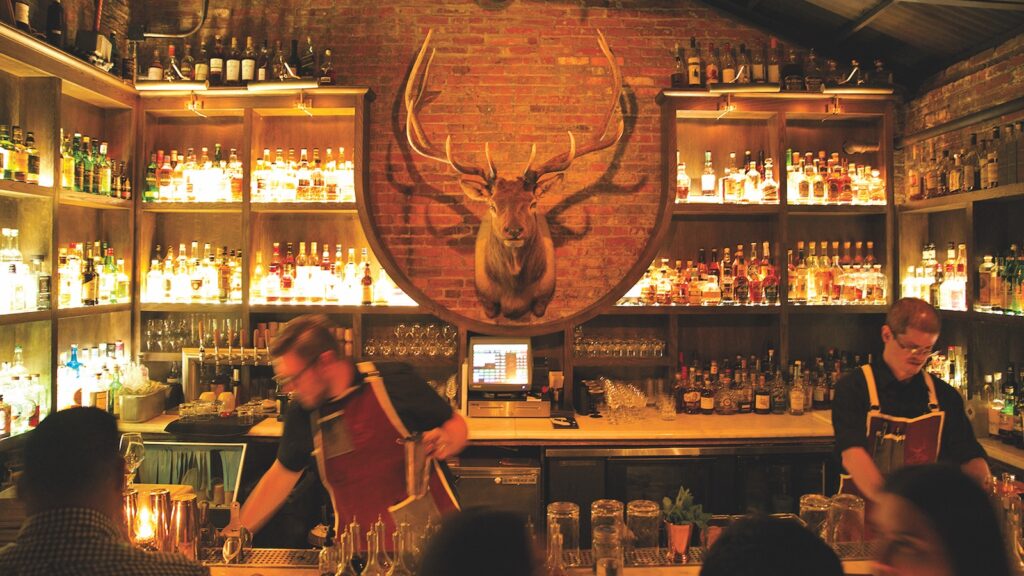 The Elk Room's speakeasy vibe takes on a modern twist with a scannable cocktail soundtrack.

Begin your second day by fueling up at Blue Moon Café, known for serving a hearty breakfast with a rock and roll attitude, or HandleBar Café, a bike shop and eatery where you and your wheels can get a fix.

Feeling revived, it's time to pay a visit to Sagamore Spirit, the biggest kid on the Baltimore distilling block, with a shiny new distillery that opened in the Port Covington neighborhood in 2017. “Our mission is to inspire a global passion for Maryland rye whiskey, and we built our Baltimore distillery to do just that,” president Brian Treacy says. Tour the 22,000-square-foot facility Sunday through Tuesday 11 a.m. to 5 p.m. or Wednesday to Saturday 11 a.m. to 7 p.m. for $15 and taste the range of rye whiskeys on offer, from Signature and Cask Strength to one of the cask-finished products. The brand started sourcing rye exclusively from Indiana's MGP in 2012, barreling its own distillate upon opening the distillery in early 2017. Sagamore is waiting for its stocks to age at least 4 years before blending into the four core products.

You won't have to go far for lunch, as the Sagamore property has its own restaurant, Rye Street Tavern, opposite the stillhouse and adjacent to the visitor center. The menu skews Southern (gumbo, fried chicken, shrimp and grits), with all cocktails priced at $15. 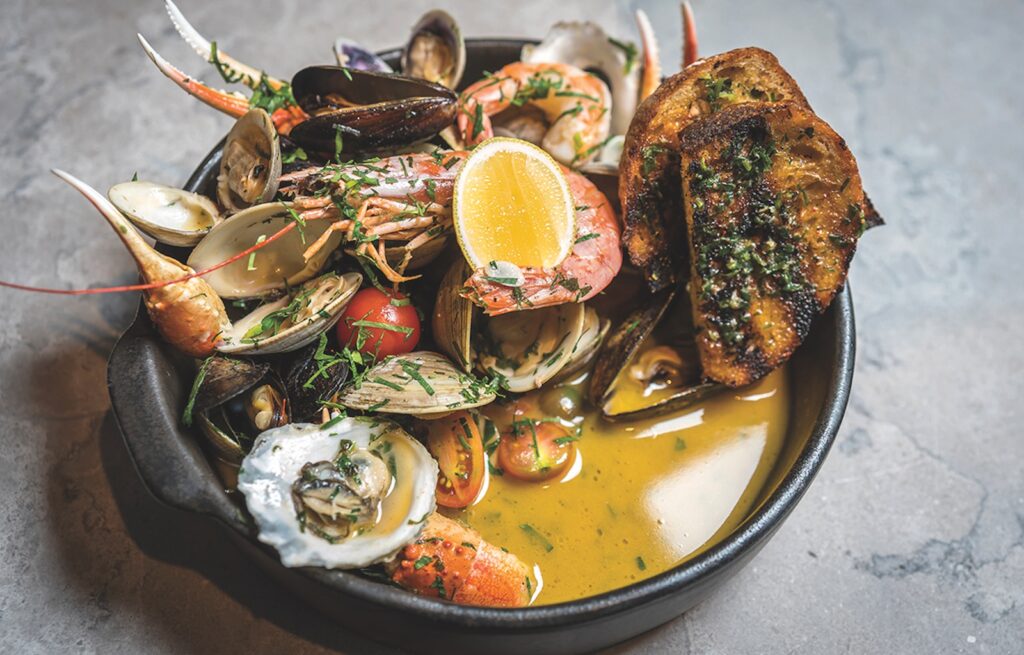 If that's not enough, Sagamore owner and Under Armour founder Kevin Plank, a Maryland native, intends to further develop the Port Covington area with new offices, homes, stores, restaurants, and parks on 160 acres of Sagamore-owned property, targeting completion of the first phase by 2022.

The sports-minded may opt instead to grab a Stuggy's hot dog at Camden Yards, home to the Baltimore Orioles. Sunday home games start at 1:05 p.m., so best to grab your tickets the day before. Take a break from whiskey and pop open the local favorite National Bohemian beer, aka “Natty Boh.” While 90% of National Bohemian sales are in Baltimore, it is brewed under contract at MillerCoors facilities elsewhere in the country (the brand was purchased by Pabst in 2010). Those looking for the full-scale brewery experience will have to travel about 25 minutes to Halethorpe, where the Guinness Open Gate Brewery offers tours, a taproom, restaurant, beer garden, store, and food truck.

If you need a break from the libations, pay a visit to one of Baltimore's impressive non-sporting attractions like the National Aquarium, B&O Railroad Museum, or Fort McHenry National Monument and Historic Shrine.

You have one mission for the remainder of your stay in Baltimore, and that's to eat a table full of crabs. “Eating crabs is more a social event than a meal,” says Andy Garner, general manager and co-owner at L.P. Steamers. Garner recommends going big on the sides and not hesitating to ask your server for some pointers. “Remember, the mallet—don't call it a hammer—is only for the claws; don't eat the lungs; and don't wear white.” He says the best time for Maryland crabs is in the fall, but restaurants like his serve them year-round. Those looking for more harbor-centric options should consider Rusty Scupper or McCormick & Schmick's, where the menu extends beyond seafood. Or better yet, time your trip with the annual Chesapeake Crab, Wine & Beer Festival, held in 2021 on May 15th. 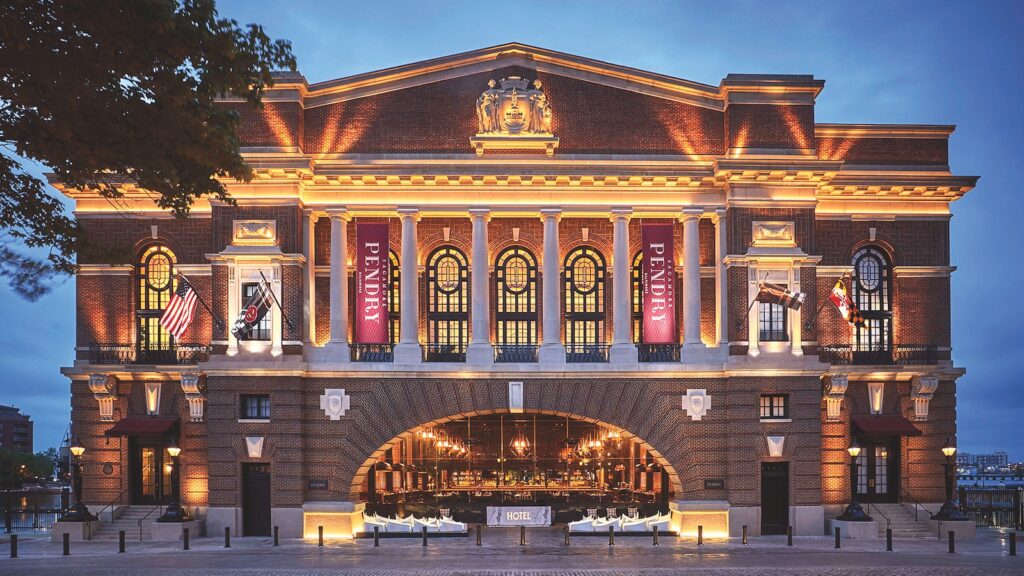 The swanky Sagamore Pendry Hotel is home to The Cannon Room bar, well-stocked with high-end American whiskeys and open to non-guests.

Close out your second day by returning to another Sagamore property, this time the Sagamore Pendry Baltimore Hotel, where you'll find a number of rare drams at The Cannon Room. The ample American whiskey list includes Buffalo Trace Antique Collection releases, Van Winkle selections, Booker's 30th Anniversary, and more. Seating is limited, but you can take your drink to the indoor-outdoor atrium or outside where a poolside bar overlooks the harbor. If there's crab in your belly and rye in your glass, you will feel content with your Charm City stay.

A trip to Baltimore is incomplete without at least one meal of crabs. Time your trip with the Chesapeake Crab, Wine & Beer Festival to go crustacean crazy.