What's It Worth? Macallan Archival Series

In “What's It Worth?” our resident auction expert examines the collectibility of a distillery, brand, or series. With prices rising, he considers the value of Macallan's long-running Archival Series.

Macallan launched the Archival Series in 2015, a series of 24 bottlings (called Folios) celebrating the distillery's distinctive print advertising campaigns from the 1970s to 1990s. The adverts, known for their gentle whimsical humor, are credited with shaping the appeal of Macallan as a single malt whisky. (Bear in mind that, in this era, single malts had not yet achieved the superstar status they enjoy today.) Folios 1-6 were sold at the distillery and by online ballot for approximately $250-$300 apiece, with 7-24 to come in the future.

With one-quarter of the series out in the world, it's a good time to assess how the bottles are performing so far. The global demand for the Archival Series has continued beyond the early peak of flipping activity, and prices are ascending as more connoisseurs begin to collect and pick up missing editions. The first six editions, which carry no age statements, were only bottled in 700 ml format and thus not released in the U.S. market, but the recent rule change on bottling size may make future releases easier to acquire stateside.

Before You Bid, Some Advice

The Archival Series is packaged in a book-shaped metal box with a book containing reproductions of these vintage ads. These are non-age statement whiskies, and Macallan does not disclose the number of bottles in each limited release. Collectors should ask for a condition report from the auction house before bidding on as the metal casing can be easily dented and the interior clips can snap, leaving the book unsecured. Given the size and weight of the ensemble, couriers may charge higher shipping costs, so factor this into your bidding. If you've bought one at auction and think you might sell it profitably within a year, try storing the bottle with the auction house to avoid paying shipping charges. Finally, don't forget to register in Macallan's ballot for a chance to buy the next release. 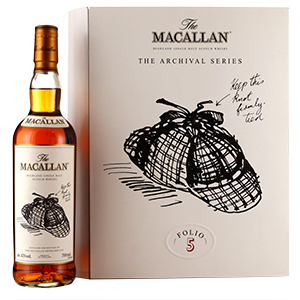 The fifth folio features an illustration of a deerstalker, named here as a “Luggy Bonnet” (pronounced Bunnet), with sound advice to keep the knot firmly tied up thus keeping the flaps from covering the ears, lest the offer of a dram becomes inaudible. This Macallan has notes of sticky dates, fresh fig, raisin, ginger, and wood spice. 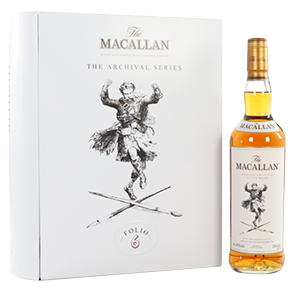 Folio 6 features a kilted Allan Shiach—Macallan's chairman at the time the advertisement was released—engaged in a Scottish sword dance over a crossed pen and brush. These days, Allan Shiach writes as Allan Scott, and produced the Netflix hit “The Queen's Gambit.” The tasting notes promise orange, poached pear, vanilla, ginger, and milk chocolate with a long finish. 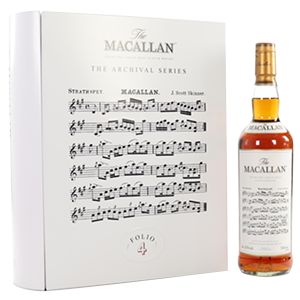 When the strathspey (dance tune) composed by James Scott Skinner was featured in the Macallan advert in The Times, it was the first time any musical notation had ever been printed in a British newspaper. This is an oaky whisky with green apples, vanilla, wood spices, candied dates, and sugared almonds. 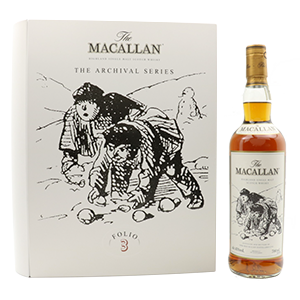 The cartoon of children preparing snowballs was chosen to introduce the idea of making good whisky in cold weather. Expect notes of vanilla pod, ginger, clove, orange peel, and soft oak, with a palate of spice and citrus, and a finish of sweet oak and vanilla. 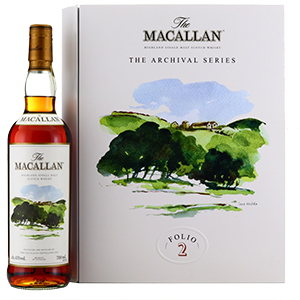 David Holmes and Nick Salaman designed hundreds of pieces of advertising artwork for Macallan. With its leafy green watercolor label, Folio 2 is the most colorful in the series to date. Expect notes of orange, rich fruit, ginger, and cinnamon, with hints of treacle and mulled wine and a velvety finish. 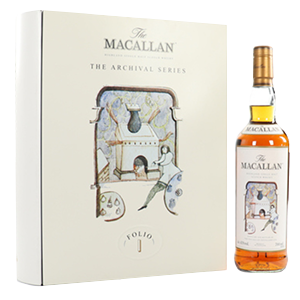 The series' debut release from 2015 relates to the first advert for Macallan, which appeared in The Times newspaper in London on March 27, 1980. The ad explained how the name Colum, derived from Columba, lay behind the distillery name. This is a classic sherried Macallan with dried fruits, vanilla, toffee, and light wood smoke.